2014 has been a year that I’ve genuinely struggled to keep up with in terms of new releases.  The sheer wealth of material out there and the incessant obsession of online reviewers to desperately be up-to-date has been an interesting but ultimately fruitless exercise to try and mimic.  Luckily, I’ve watched a good number of excellent films from all around the world and have been bowled over several times.  I have, however, missed out on several films I did want to see this year including Mike Leigh’s Mr Turner, Andrey Zvyaginstev’s Leviathan and Pawel Pawlikowski’s Ida.  They’ll almost definitely be viewed in the new year.  Anyway, here’s a list of my favourites from 2014.

1) Under The Skin – Jonathan Glazer

Though I actually saw Under The Skin last year (hence why it was in my 2013 top 10), because I was disallowed it in official selections I was asked to contribute to, I’ve put it back in.  I’ve also yet to see a better film this year; the combination of landscape, weirdness and a stunning electronic score from Mica Levi made it tailor-made for my cinematic needs.

Having not seen much Lav Diaz, Norte took me by surprise.  Though short for a Diaz film, his Dostoyevsky adaptation was refreshingly brutal and a tough four and half hours of intelligent drama.  Later scenarios involving a revisit to the family home are still playing on my mind.  Harrowing cinema at its most engulfing.

Though still quite difficult to see, Pavich’s documentary made me mourn even more the loss of Jodorowsky’s epic project.  Whether it would have melted reality and perception in a Scriabin sense is debatable but there’s no doubt that it would have been a quite bonkers piece of art.

A somewhat hyper-active and dizzyingly innovative homage to 1970s Giallo pictures, The Strange Colour Of Your Body‘s Tears is one of the most enjoyable horror films I’ve seen in a while and much better than the usual schlock of endless zombies and TV movie type pulp.

At times shockingly violent, Blue Ruin felt like a refreshing  injection of energy into the revenge sub-genre.  Made on pennies and open to multiple moral readings, it was far and away the best narrative film that came out of America this year that I watched.

Being a huge admirer of Rivers’ work in particular, there was bound to be something to like in this film.  Yet, even with the blinkers turned off, it was clearly something very special indeed.  The combination of Rivers’ and Russell’s different approaches to ethnographic capture meant that it felt fresher than most narrative cinema around.  The decision to stick with its final third (a vital element to the thematic readings of the film) is also an aspect that should garner huge creative respect.

A late addition to my viewing (it was either to be this or Leviathan which, to my shame I have yet to see), Ceylan’s Winter Sleep felt like a monumental experience.  Though I don’t think it’s anywhere near the best film of the year, or the best film to have come out of the Cannes festival where it won the top prize, it’s certainly high cinematic art and worthwhile viewing if you have a spare three hours. 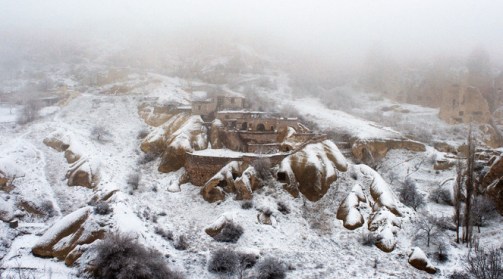 A deeply unsettling documentary that uses visuals to actively comment on a genocidal atrocity.  Panh’s achievement is not simply in making a good film but in using the very medium of cinema itself to, in some way, reinstate whole swaths of people into history whose demise was not only definitive but also coupled with a complete historical blackout thanks to the Pol Pot regime.

Having dived right into Denis’ work this year, Bastards came as a bit of a shock.  Gone were the questions about imperialist tensions and social rank and instead in its place was a neo-noir with a rancid belly hiding underneath it.  Not the strongest film I’ve seen by Denis this year though that means very little considering the sheer quality of her work.

I’ve found myself viewing in phases this year based variously on directors, actors and countries.  Largely, my viewing has leaned towards British film, in particular the films of the 60s and 70s.  It’s become my favourite era for just about any genre because of viewing classic after classic; British cinema in the era of the counter-culture seemed to have no boundaries whatsoever.  Other phases have included the work of Charles Laughton (probably my favourite actor now), Cary Grant, Lindsay Anderson, Chantal Akerman, Ken Russell, Peter Greenaway and Claire Denis.

Most exciting of all was finally diving full on into the work of Robert Altman whose The Long Goodbye is the best film I’ve watched this year.  I’ve also adored discovering Nashville, Images, 3 Women, MASH, Fool For Love and several other as well.  If I had a “director of the year” spot, he’d very easily get it.

2014 has been a great year for home releases but also a frustrating one personally.  This list would very probably be completely different if not for the fact that several labels seem to insist on putting the films I’m most interested in on Blu-Ray only (If…. (MOC), and all of Arrow’s Vincent Price releases spring to mind).  I’ll no doubt upgrade to using them next year as it’s becoming a norm.  Caligari was the runaway best release simply for its awe-inspiring restoration.  Never before has a film changed so much when having been properly and lovingly restored.  Elsewhere there was plenty to discover in Arrow’s Walerian Borowczyk set and the BFI’s Alain Robbe-Grillet set.  To discover the work of someone completely off the radar and find it to be so brilliant was a total pleasure so here’s hoping to more box sets of obscurities in 2015.