In contrast to other cineastes that I follow online, I really don’t get out that much. While so many excellent film writers seem to be able to see every relevant new release as it comes (even before if they’re lucky enough to have time and money to get thoroughly into the festival circuit), it’s actually a rarity for me to be able to get into the cinema and make the most of modern fare.  The massive chasm of cinema from the beginning of time that I’ve still yet to see often sets off paranoid delusions; how on earth can I make the time to air my view on Gravity when there’s so much I haven’t seen before it?

This troublesome question aside, I have actually managed to vaguely keep up with current releases thanks mainly to Sight & Sound; forever the message in a bottle from the outside world that enters into my self-imposed hermit existence when I’m busy writing, filming and doing other silly things.   Thank heavens for screeners.  The following list of my best of the year may seem skewed to some (especially considering the lack of some the big cultural hitters from Cannes and the like) but it’s an unbiased and honest view of a cinematic landscape from a cave.  Make of it what you will.

Best Films Of The Year.

Films that deal with sound and philosophy are always going to receive a lot of attention from this website.  There appears to have been at least one successful film a year to address issues around these criteria but Silence is the most beautiful of them so far.  Easily the best film of the year. (Full review + Interview)

Under the Skin – Jonathan Glazer

The lovely Kate Muir at The Times got me into a screening of this a few weeks ago and I adored every second of it.  Its score is the best I’ve heard on a modern film for a long time (so good in fact, I’ve desperately emailed Mica Levi begging for an interview) and its mixture of Jodorowsky strangeness and Loachian grit is refreshing beyond belief.  Expect a full analysis of it closer to its release.

This year is the first time I’ve become aware of the impact that grumpy critics can have on the reception of a film.  Refn’s film is a modern masterpiece but its early morning screening at Cannes seems to have blinded so many. Luckily Refn isn’t as docile as critics and has created a beautiful, violent sonata (literally when looking in detail at its form and structure). (Full review)

Beyond the Hills – Cristian Mungiu.

This was one of the most affecting piece of cinema I’d watched in a while.  The temptation to label it “slow cinema” is there but it would seem unfair considering Mungiu is really starting to carve out his own brand of cold, unnerving dramas.  The mental break-down and the fallout from the isolated belief system of a small religious sect made for both harrowing and gripping viewing though I felt numb as the snow hit windshield and the credits rolled. Beautiful but in a very icy way.

Having only watched it recently, Bujalski’s Computer Chess is still lingering on my thoughts.  Weird little projects with older cameras are far more interesting than big budget nonsense but there seemed to be something more going on than just geeky nostalgia.  Trying to figure out exactly what is something of a puzzle. (Full review)

I was lucky enough to see this film at a special one off screening at Darkness into Light; an independent film night that makes up for my home city’s relative neglect of most challenging cinema.  Brutal, pure cinema and very Bressonion.

Kiarostami was someone I, embarrassingly, only became fully aware of this year.  As a lead in to his work, this perhaps wasn’t the best choice (I’ve watched a lot of his Iranian films and other stuff since) but it was still a cool, calm destruction of relationships. (Full review)

A Field in England – Ben Wheatley

Folk Horror is something I go on about to the point where people just want me to shut up so I had high expectations for Wheatley’s film.  While these were perhaps too high (the first half an hour needs a seriously good edit), it was still the best Folk Horror out for a long time.  Probably since the 1970s actually.  His adaptation of Ballad’s High Rise is also something I’m also greatly looking forward to in 2014.

In the House – Francois Ozon

In the Fog – Sergei Loznitsa.

Me and You – Bernardo Bertolucci

Films I Have Ready To Watch That Would Probably Have Made The List.

There are some notable exceptions from my list of loveliness of 2013, especially in contrast to other people’s top films.  The following are films that are all high on my to-see list, most of them waiting in a pile of screeners to be watched.  From reading up about them (especially the Grierson-esque Leviathan), I’d be willing to bet that most would appear in the above list if I’d watched them before writing this article.

The Act of Killing – Joshua Oppenheimer

The temptation to add Abel Gance’s Napoleon to the list is overwhelming as I still haven’t got over missing its screening at the Royal Festival Hall.  Maybe one day.

Home releases in the UK have never been better served than by its current roster of distributors.  Eureka/Masters of Cinema, Arrow, Artificial Eye, Soda, New Wave Films/Porter and Frith and the BFI have made it arguably just as good to stay at home for cinema (cue angry, puritanical protests).  This website has largely focussed on the BFI Gothic season’s releases but there’s been a whole host of excellent releases from The Complete (almost) films of Sadao Yamanaka to the definitive cut of The Wicker Man.

On a side note, the BFI Gothic festival has meant that this Autumn/Winter has been one of my favourite times to be a film fan.  From releasing Robin Redbreast, Dead of Night and Sleepwalker on DVD to screening all sorts of classic horror, it has been almost tailor-made to my cinematic addictions.  The latter has also allowed a friendship to spring between myself and its director Saxon Logan which was a nice surprise, especially with his wonderful stories of Lindsay Anderson and Bill Douglas to share.  The season has put a spotlight on everything I adore about the medium (I’m sure you can tell from articles covering just about every local screening and every release appearing somewhere) but, most of all, the festival meant I was lucky enough to meet a hero in the form of Robin Hardy.

At the art deco Plaza in Stockport, I watched the new cut of The Wicker Man with full intro from its resident organ player, then managed to rip my coat in impatience and worry,  chasing the poor Hardy into the lobby for a quick shake of hands and picture.  I may have be worn down from getting there (I had already been up since 6) but, as the picture shows, I clearly thought it was worth it.  My cinematic highlight of the year without a doubt. 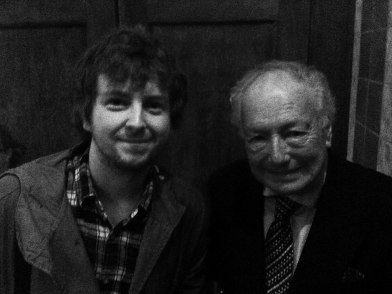