Jonathan Glazer’s Under The Skin (2013) is a film that is structured around the different landscapes and their collected norms to such an extent that it comes to resemble a strange, erotic and surreal travelogue.  While the film’s ambiguous nature is one of its defining features, its portrayal of specific locations and, vitally, their effect on the people within them, is a solid representation of the psychological affect induced by landscape.  Glazer’s film takes great care in defining these places that the alien stalks around, as if finding some realism in the fantasy will create a new dialogue between the two.  However, in this sense, Glazer moves away from the norm of this relationship and instead creates fantastical inner landscapes to contrast against the vast, rugged landscape of Scotland in both its rural and cityscape forms. 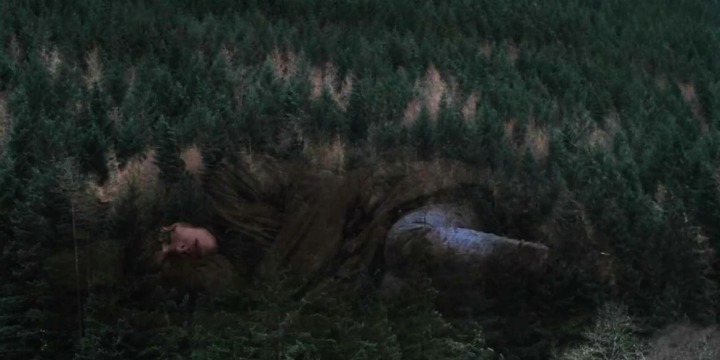 Under The Skin follows Scarlett Johansson as a vague alien life form who is luring men into some form of ship which appears to feed on their bodies.  Johansson isn’t the only figure of this alien race but is the solitary drone who takes the form of voluptuous woman in order to bait the various men.  She is joined in part by male counterparts who seem to be part of the process of feeding this ship, the main one (that gives chase later on in the film when Johansson’s alien spares someone out of guilt or perhaps empathy) is seen to provide clothes for Johansson and seems in charge in some alpha male way.

A large part of Glazer’s film is reliant on the alien’s reaction and relation to the social landscape of Scotland.  This changes dramatically throughout the film as it journeys further away from the cities (Glasgow) and suburbs until finally ending in the highland forests and mountains.  These social sects that appear throughout various points in the film are so shaped and moulded by their location that it sets up a precedent for Johansson’s actions which are gradually more and more affected by the environment until the city drives her to make a mistake.

What’s interesting about Glazer’s approach to creating a modern Scotland is that he grounds his style in the traditions of a Loachian sense of social realism.  This isn’t to say that Under The Skin is simply a Kes (1969) or Sweet Sixteen (2002), shot through the prism of a Kubrick-esque science fiction but it’s probably the closest amalgamation possible of the two genres.  For while Johansson arms herself with a trusty white transit van, Glazer arms himself as a filmmaker with an array of techniques in order to create the social landscape of the film.

Instead of simply creating all of the minor characters, often working class men, a variety of secret filming mixes and crosses the boundaries of the film’s realism, making the fake characters seem more realistic and also causing alarm in the viewer at what is potentially real in Glazer’s Scotland.  This Scotland is full of the realist textures of rundown houses, ubiquitous city-branded shops and cheap night clubs but the way it’s shot suggests that these man-made environments are more textural in their inclusions than simply a grounding of the surreal and horrific events in reality.

By also setting up this precedent of showing Glasgow in particular to be a hunting ground, it implies a strong divide between the rural and urban.  Yet this implication is all but shattered by the film’s events later on, suggesting that this location is shifting just as much in geography and safety as more obvious locales such as the snowy mountains where the film finishes or the shingle beach where one of the film’s most disturbingly cold occurrences takes place (which will be discussed in detail later on).

The urban landscape also manages to act as a sort of pipe work of travel necessary for the aliens to perform their tasks.  In many ways, Glazer and the aliens turn this particular part of Scotland into a sentient being; the ship being its heart and brain where it devises its plans and needs its food while the endless motorways and roads are the arteries where Johansson’s alien can pick up said food and where the motorcycle forms traverse along to help or to prey themselves like white blood cells.  When Johansson’s alien defects, this metaphor is heightened by a stunning visual of the her motorcycled cohort turning off at a network of junctions in a winding switch island as if in search of the lapsed cell.

While Glazer portrays a number of different landscapes and forms throughout the film, none are as breathtaking as the landscape of the alien form itself.  The film’s surreal opening scene, heightened to that of a dramatic birth by Mica Levi’s impossibly brilliant music, sketches an abstract form in such detail that it feels coldly intimate.  This is to be expected with a film that uses the form of a woman’s body to entice naive men but the opening is what sets this precedence, not simply the nakedness of its lead performer.  The strange black and white shapes take minutes to form, almost becoming video art in their apparent lack of meaning.  Gradually, these shapes are shown to be the landscape of formation; this is an intimate view of Johansson’s alien coming into existence.

Fascinatingly, Under The Skin presents two sets of life forms; those that are affected by the environment around them and those whose lack of conformity to it ultimately leads to their shortcomings.  The humans represent the former (largely) and Johansson’s alien represents the latter.  For a film that uses so many of the techniques of social realism, it is surprisingly within the non-urban environment that the cinematic grammar is at its strongest.

As Johansson’s blunder of letting a human survive the process of feeding causes problems with the lead cyclist alien, she runs away to the country, or more specifically the highlands.  As she gets further and further away from the urban jungle of Glasgow, the people of Glazer’s film change while Johansson’s rigidity as a faux city prostitute remains.  They become more inquisitive in a general sense, informed by the gradual isolation of their location until the alien eventually meets a relatively friendly human.

Earlier in the film, however, this was shown to not necessarily be as formal as is made out.  In a rare rural hunting scene, Johansson attacks a surfer and a near-by family in a shockingly cold manner.  This is later mirrored for the final few scenes but, for now, the environment allows Johansson’s alien nature to be stark and shocking.  Whether it’s her finishing off the innocent man with a rock or the leaving of a young child on the beach while its parents have been swept away by the sea, her distance from her actions cannot seem anything else but alien.

Glazer again shows the potential sentience of his location by showing its transport, especially when the motorcycle alien follows through the motorways and roads at great speed, gradually showing the blur of his surroundings to become greener as he gets further away from the hub.  This in a sense shows a stark parallel between the aliens and the humans: both have deliberately headed for supposed civilisation and city living for reasons revolving around the basics of living (money for people, food for aliens).  This is why the contrast between the rural and urban works so well in the film.  Both sets of creatures are out of their comfort zone.

As a final push to show the harshness of the beautiful landscape (almost as a contrast to the clear jaggedness of Glasgow living), Glazer ends his film with explicit use of surrounding area.  As the tables have been turned on Johansson’s alien (where she has become the hunted by an isolated predatory male lumberjack), her fate is sealed by the location’s affect; the sheer isolation of the hilly woodland on the lone man all but suggests her final fate and his reasons for descending into his primitive actions.  As she is left burning, fully alien and alone in the vast landscape, a mere elemental in the huge vista of the mountains, Under The Skin can’t help but show just how influenced beings are by the isolating beauty of the natural world.

Under The Skin is released on the 14th of March.

4 thoughts on “Under The Skin (Jonathan Glazer) – The Human Landscape.”