A palette of strange objects, muted imagery, and medieval oddness awaits the viewer of Walerian Borowczyk’s Blanche (1971); only the third feature film in one of the most surreal and haphazard cinematic careers of all European art house directors.  Though now more infamous as a purveyor of perverted worlds and eventually soft-core titillation (Emmanuelle 5 in 1987 being a complicated low point), Blanche shows the director to still be creating work at the very heart of the medium, providing enough interesting creative material to easily sit the film alongside other high calibre works of this period.

Blanche (Ligia Branice) is the title character who sets off a wave of events due to her natural beauty and sensuality.  The king (Georges Wilson) visits Blanche’s husband (Michel Simon) and uses his page, Bartolomeo (Jacques Perrin), as a stooge for getting away with an attempted seduction.  Bartolomeo is then set upon by Blanche’s stepson, Nicolas (Lawrence Trimble) who is also in love with her and secretly seeing her behind his father’s back.  Upon the king’s return, he finds chaos has fallen out and the film ends on a bitter note; a plague of jealous madness bringing a central finality of Romeo and Juliet proportions to Blanche’s drama. 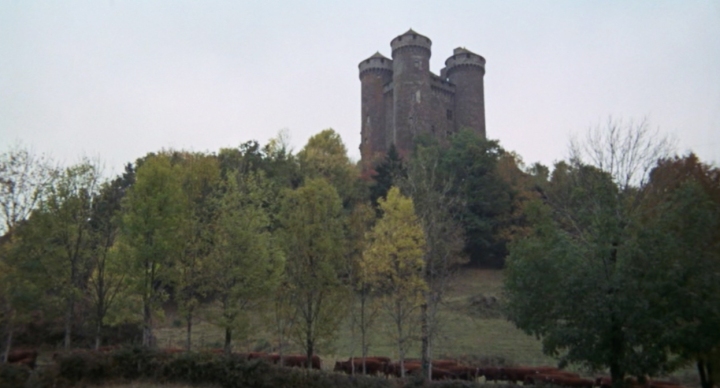 The film has a number of intriguing aspects, some intentional and some which seem more accidental.  Blanche is visually in keeping with a number of films from this era; looking back at a more primitive European history and finding much desperation in it rather than the optimistic thy-slapping of the Hollywood historical.  Blanche is still however a melodrama and one that bears the basic hallmarks that such a form could bring; the tyrannical father, the passionate lover, the delicate maiden etc.  Yet these elements do not seem quite so drenched in aspic as they do in other forms.  Borowczyk is presenting more than just a drama of emotional fallout and repercussion.

Visually it sits comfortably alongside such films as Werner Herzog’s Heart of Glass (1976) and perhaps even The Enigma of Kaspar Hauser (1974).  It’s not implausible to believe that the wine chalices in the castle are made from the finest of ruby glass.  The film has that same muted colour palette, one that suggests a contentious dualism between an attempt at realism and a subtle subversion of impressionism.  In several beautifully composed scenes in the woodland of the castle, the colours of the faded forest seem to comment on the characters who are fighting for the love of Blanche; a muted fire that eventually diminishes as the absurdity and potential risk of pursuing such feelings becomes ever more clear. 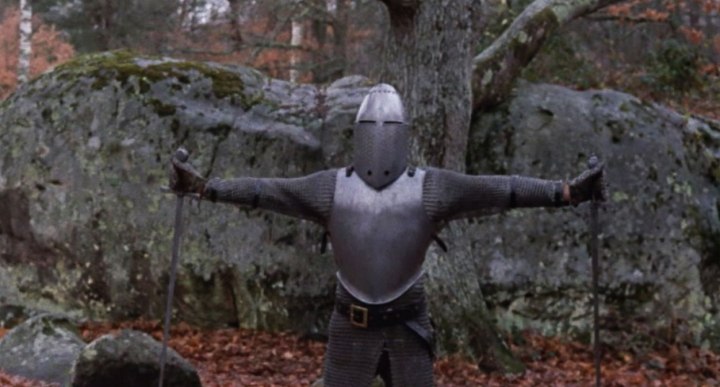 Blanche was a film plagued with problematic shoots, largely because of its cast who appear to be at odds with just about everyone and each other.  Most ironically controversial was Blanche herself played by Borowczyk’s muse and wife, Ligia Branice.  In spite of Branice being a perfect foil for Borowczyk’s loving camera, her presence caused enough frictions between performers to give the film a distinctly odd feel.  It seems even more ironic considering that she has supposed to have cast a spell of different kind over all of the male characters.  The soft-focus light that follows her around seems like some god-given gift; a technical necessity by Borowczyk who even goes against the film’s own basic continuity to achieve a perfect image for his muse.

Blanche also contains one of the last performances of a great stalwart of European art house cinema, Michel Simon.  Torturer of Joan in Dreyer’s classic as well as working for the likes of Jean Vigo, Marcel Carne, and Jean Renoir, he is a monolithic screen presence with a bloodhound face and eyes full of menace and anger.  His clear annoyance at Branice is rather easy to detect, making the eventual discovery of his wife’s promiscuity seem more like a cathartic pleasurable exercise in getting the opportunity to shock her rather than the upsetting loss of a loved one. 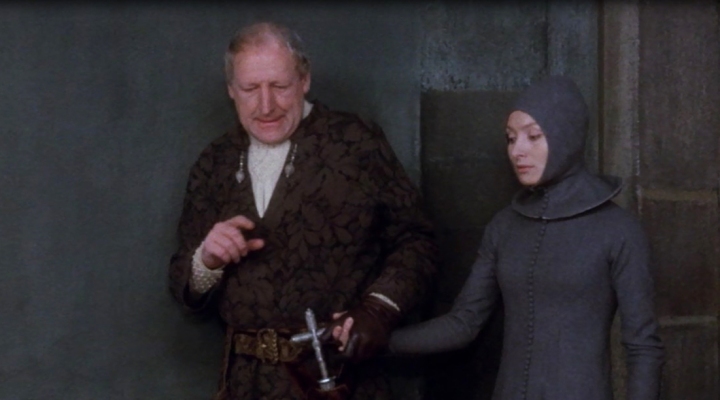 Blanche is also a strangely directed film, making it an enjoyably staged visual experience.  Many of the shots are of movements along the X axis with the characters interacting with each other almost side on.  It reminds of the earliest forms of cinema with single walled sets though Borowczyk rather cleverly breaks this rhythmic pattern whenever it begins to solidify, using a quick close-up or a movement away entirely to disrupt the repetition.  It’s the sort of subtle variation of form that still seems at the heart of creative cinema; using the camera, the cutting, the very angle of image to say something more than simply “here is a narrative.”

The final shot breaks this rhythm and as a character is dragged to their death by a horse, it feels as though Borowczyk is breaking free from the tortuous monotony of the castle style and instead is allowing an escape; one that is only possible through a painful and savage death.  Blanche may not be Borowczyk’s most daunting or overt work but it is one imbued with a subtle creative agenda. 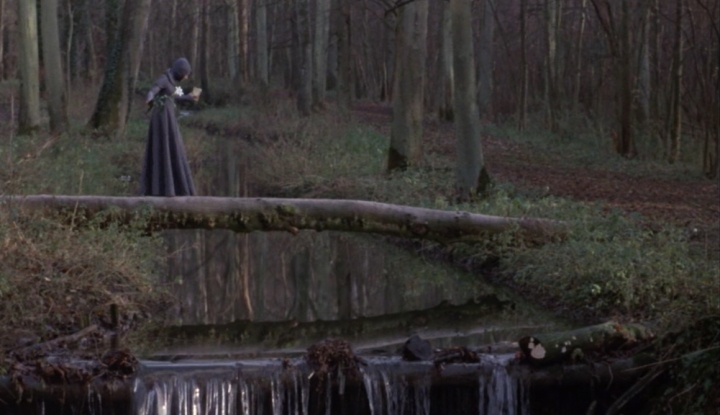 Perhaps in aid to help make Borowczyk’s name more well known, Blanche, along with the other Borowczyk releases, are stocked full with extras.  The first on this disc is an informative introduction by director Leslie Megahey, more well know for films such as Schalcken The Painter (1979) released by BFI Flipside last year.  It’s an interesting addition though pales in comparison to the main feature on the disc, Obscure Pleasures.  This 65 minute documentary, built from rare interview footage and various visuals of his work (hence why a PG film is released with an 18 certificate) is a brilliant and all encompassing introduction to the madness of the director.

As well as these, there’s a half an hour making of feature concentrating on Blanche itself – entertaining for relating much of the behind the scenes problems and history of the film – as well as a disturbing short film about a pheasant farm, Gunpoint (1972), and a documentary to explain the horrors of it.  A plump and satisfying release clearly made with adoration and a care to detail. 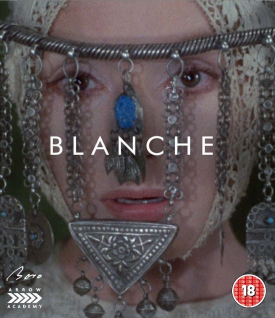