Despite living in an age of increased documentation, archive and detail, history can still be a tricky picture to paint.  For so long, the old adage of it being written by “the winning side” has been a tried and tested bias exposed in whole chapters of recounted history.  This has been a development based around prejudice whether through class, racism, sexism or other forms of marginalisation but one form rewriting history still remains more difficult to fill in; that of the history of countries and populations under the strict rule of a dictatorship.

Rithy Panh’s biographical documentary, The Missing Picture (2013), seeks to address this gap in the history of his native Cambodia (a topic which the director has addressed in other films too).  This not only seems like a difficult task because of this strict, rewritten history being so solidified in what remains of its propaganda-heavy archive but also because the events trying to be expressed are so heartbreaking, both for the viewer and the director himself.  The Missing Picture, however, manages to overcome this hurdle as if in some final form of rebellion against the Khmer Rouge and it does so in the most innovative of ways.

Panh’s film follows the narrative of his own memoirs, published earlier last year under the title L’emination, as his family are forced to move by the new communist revolution into labour camps where they are slowly forced to work and eventually starve.  The actual missing picture of the film’s title is the visual evidence of Panh’s experience which, judging by the remaining archive footage shown in the film, is one that has been all but ignored in favour of extreme communist fantasies.

While this footage is in itself an interest (perhaps in the same way that the filmmaking of Leni Riefenstahl has in its curious but uncomfortable draw), Panh’s true innovation comes in his retelling of the reality of Cambodia under Pol Pot and his demented allegiance to misread Marxist texts.  Panh does this using two very effective and affecting techniques; through the visual of clay men and through a stunning recreation of the soundscapes of the time.  This aesthetic creates a direct clash but one that surmises the whole of The Missing Picture.  While the sounds of the film hint at the work, the struggle and harshness of the physical environment, the visual shows a group of people forever trapped, unable to move within the boundaries of regime and within history.

To understand the sheer scope of Pot’s regime is to understand the dark paths that Marx’s original ideas can be twisted in to and The Missing Picture holds no bars when showing the large scale dismantling of the individual, of culture and of the freedom of thought outside of the communist gestalt. To hear Panh’s lamentation of the cinema culture that existed before the revolution hints at a childlike fascination with the bright lights of movies that are prevalent in much of western cinema.  His description and recreation of the studio could easily be discussing some lavish production from the Hollywood golden age and its eventual fate is made even more painful when learning of the eventual future of the country’s creative talent. 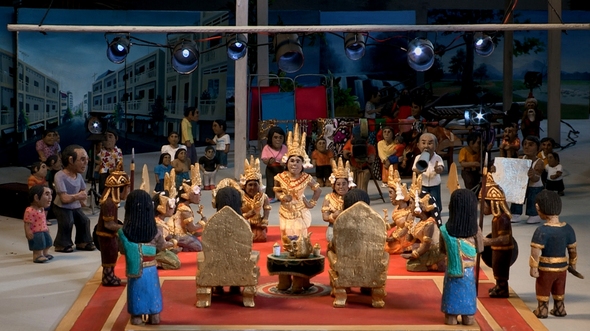 The film is very clearly a melancholic one but there’s also a sense that its existence provides some relief for the filmmaker whose own living embodiment must have been his only personal evidence that any of the horrors actually took place at all.  Along with the printing of his book, Panh states that he can now look back on his film but, more importantly, that the viewers and anyone else can too.  From his descriptions of the events and the way he recalls them, there is a great sense that this missing history had been eating away at his very being.  This becomes overt with visuals such as the constant crashing waves over the camera or the continual, necessary burial of his relatives and family whose mourning has yet to start properly having been sullied and muddled by guilt.

The Missing Picture is more than just a rebellion or even a realigning of truth in the modern history of Cambodia (of which it is a strong and powerful eye-opener).  It  is very clearly a cathartic exercise for Panh himself, as an individual scarred and still haunted by the past.  As shown in the film, the little clay men and women that are moulded with such care and attention, gradually disappear.  Their hair is shaved, their clothes are dyed black and they become numbers.  Panh’s guilt at being his family’s only survivor seems to be the crux of the film and his attempts to convey the brutal truth of Pot’s regime is his way of burial, rebellion but, most importantly, acceptance.

The Missing Picture is out on DVD on the 24th of March.