In spite of its very energetic reappraisal and various analyses, Michael Powell’s career destroying masterpiece, Peeing Tom (1960), is a film whose musical eccentricities and sound design contain hidden depths. For a film that appears on the surface to be almost excessively Freudian, this was normal yet, when looking at some of the detailed reappraisals and even some of the high-end re-evaluations of its narrative by the likes of Roger Ebert, Peeping Tom‘s musical score very rarely gets more than a fleeting mention. This, in hindsight, is highly surprising chiefly because its musical score is responsible for the film’s most disturbing and overall effects upon the audience. 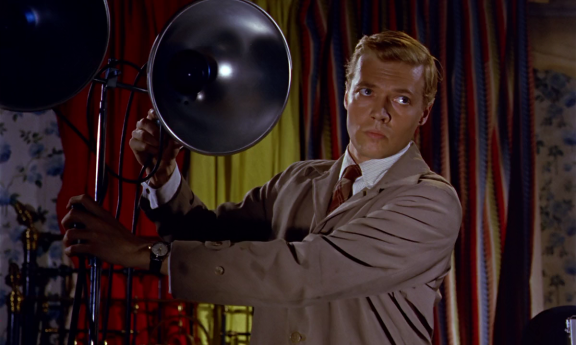 Powell’s film follows the exploits of a disturbed young man, Mark (Carl Boehm), whose troubled childhood has lead him to obsess over filming the final moments of the murder of women at his own hands. While Peeping Tom is explicitly about the visual relationships possible because of cinema, many of the arguments over its thematic content have largely stemmed from its vast uses of different methods of filmmaking. Martin Scorsese in particular is on record as naming it as one of two films (the other being Fellini’s 8 1/2) that surmise the troubles and work of being a filmmaker while Ebert is more interested in its relationship with its audience.

This reading will of course focus more on the analysis in Ebert’s vein, if only because the cinematic narrative presents a stronger reading for a leaning towards voyeurism rather than simply a satire on the horror film directors of the day. The first interesting relationship to consider is the different modes of perception that are caught on camera during Peeping Tom. By delineating the film into three separate categories, the music can then be examined and contextualised properly.

These three modes are as follows:

Because of this split within the film, the musical score becomes psychologically complicated for the viewer and the analyst. This is before even taking into account the general musical complexities of the score. Composed by Brian Easdale and performed by the technically accomplished Gordon Watson, the score seems partly like a deliberate technical challenge for the solo pianist and takes up the majority of the sound world. Describing it in this way perhaps begins to hint at where this analysis may venture; that of the logistics of silent film scoring.

For a filmmaker with such a back catalogue of lavish orchestral scoring, this aural choice screams of ulterior motives. While Mark simply must capture the moment of fear and realisation of impending death of the women he photographs, his camera never picks up their vocalisation of this moment. Their screams are lost in his memory which is instead pervaded by memories of his father’s psychological experiments on him during his childhood.

While the first mode of the film does seem to have a more baroque style of piano scoring, hinting at the melancholic tragedy of Mark’s life, when the film switches to the second or third mode of viewing, the subtle hints within the score that the piano was for a silent film come to the fore. Easdale’s music no longer scores Powell’s film but instead, vitally in understanding the horror of experiencing Peeping Tom, his music is in fact scoring Mark’s films. By doing this, the irregular mode of viewing implicates the audience in Mark’s actions and, similarly to Ebert’s analysis of the film, suggests that the viewer is the voyeur just as much as Mark is.

This may perhaps explain some of the harsh criticism of the film at the time, especially from the more stuffy end of populist film journalism who no doubt disliked being implicated in the trappings of a mere genre film. And yet, by including the third mode of viewing within the film too, Powell also gives them a get-out clause; a release and relief from the pangs of moral consciousness that the implicated in twisted murders often require. By showing the characters in various moments of viewing Mark’s films and showing the music to repeat in its silent film-esque representation of jeopardy, Powell shows the inner working of the trick. Sadly, the critics were probably too busy being outraged to notice such a subtle method of audience manipulation.

The complex piano score isn’t by any means the only musical content effecting the relationship with the viewer. Powell makes sure that even his characters are uncertain as to the effects of music upon Mark’s films. In the famous dance sequence with Moira Shearer, the music takes a completely different turn, showcasing a diegetic radio blasting out some enjoyably period tropica music. While this scene seems to suggest little more than a ruse to get Shearer’s character on her own, the sound hierarchy of the scene tells of much more going on psychologically within Mark’s world.

As he starts to enact his rather twisted plan, this diegetic music inexplicably fades out. There’s no explanation given within the visuals of the film; the sound simply zones out. It is however replaced with the piano music that has gradually become a leitmotif for an impending murder which proceeds to get louder and louder. This music’s presence begins to suggest that Mark is actually scoring his snuff films in his own head, making a number of sections within the score come under that ever complex description of meta-diegetic. With the film providing many moments of disembodied voices, this relationship isn’t too much of a stretch in the reading; if his past is haunting him with voices that the viewers can hear, surely the viewer can also hear his cinematic autuerism deciding on his own musical scoring?

Leave a Reply to Enchanted By Film Cancel reply