Strange undercurrents of sexuality pervade the films of Stanley Kubrick.  Though not always present explicitly, a raw pipeline of dark desire and physical wanting seems to pop up at random points throughout his work.  From Dr Strangelove‘s ideas of selective breeding based on the “sexual characteristics that will have to be of a highly stimulating nature” to The Shining‘s most surreal haunting of a man receiving oral sex from another man dressed in a bear suit, sexuality has always been given an unusual tint through the Kubrick prism.  This tinted undercurrent, however, comes to the forefront in Kubrick’s final film, seeming to burst onto the screen as the director makes his final, provocative hurrah.  Eyes Wide Shut (1999) is already a strange proposition even before viewing.  Its cast is of A-list Hollywood, more known for populist cinema of various genres and quality, its score is a heady mixture of experimental art music (Jocelyn Pook) and sleazy AOR (Chris Issak) and its story is based on Arthur Schnitzler’s novella, Traumnovelle.  No doubt its casting in particular subverted the expectation of less versed cinema goers at the time, expecting a straightforward thriller but instead getting a slow burning  psycho-sexual odyssey.

While Kubrick’s other films have often been analysed because of their narrative ambiguities, Eyes Wide Shut is one of the few where the moral ambiguities of the characters are actually of more interest than the overall narrative fluidity.  This emphasis on all that is happening being derived from a lax in moral adhering (i.e. infidelity or at least the potential for infidelity) drives the story forward even if it is never quite towards a solid conclusion.  Kubrick’s lens follows the relationship of a wealthy husband and wife; ever the typical set-up of morally bankrupt, bourgeois subversion since the days of Buñuel, Pasolini and Antonioni.  Though both are seemingly flirty with various people at a party, it is not until the wife, Alice (Nicole Kidman), admits to coming close to cheating on her husband, William (Tom Cruise) that things start to go awry.  This admission sets off a chain of events, provoked by jealousy, paranoia and an almost dream-like unawareness that speaks of infidelity as having a power akin to an occult ritual.  Sexual activity all of a sudden can force William into a dream-world of imagination, seeing images of his wife in bed with a sailor but equally seeing the more sexualised elements of society come out of the woodwork.

This is where Kubrick likens sexuality to an occultism; by showing it to be ever-present but only perceived when affected by it or duly aware of it.  Before the admission from his wife, the sexual encounters (or at least potential sexual encounters) at the party are shown in a different light, albeit one that is still cold and clinical.  His chaperoning of two good looking women in front of his wife while she herself flirts alarmingly passionately with a much older man seems more jovial and less ritualistic before the watershed moment of her admission.  Even the discovery of a young prostitute overdosing in a bathroom upstairs is treated as a calm consequence rather than a dark and morbid visualisation of someone’s desperation being exploited by another’s sexual wants.  Post-admission, William begins to become involved in a number of activities that force him to confront the power of sexuality.  All of a sudden, the people around him are all under its spell, either because they require it (the Japanese men in the costume store), because they can make money from it (the owner of the costume store) or both (the underage daughter of the costume store owner).  The main implication of this sexual occultism is William’s eventual journey to the ritualistic, private ceremony and orgy at the mansion house where his friend plays the music (blindfolded and unaware but happy to be paid).

The whole concept is a typical Kubrick view of sexuality, not being too far from Dr Strangelove‘s idea, only less interested in creating a new population (though there’s no doubt that this was not particularly on Strangelove’s mind at the time of his idea either).  The house is a very deliberate evocation of bourgeois excess, with very little competition in terms of lavish interiors in cinema.  In fact, the sequences within the house almost have a Buñuel feel to them, and one half expects them to become trapped within a single room à la The Exterminating Angel (1962).

As William smuggles his way into the masquerade orgy, Kubrick finally ties the knot between sexuality and occultism.  The selection of sexual partners no longer becomes a simple “car keys in a bowl” affair but a dehumanisation of everyone; removing their identity through masks and only allowing their bodies to be symbols of a group ritual performed by a gestalt like many of Alex Sanders’ rituals.  Of course, Kubrick was bound to draw detractors for the visual aspect of the scenario.  Out all of his screen portrayals of women, this is his most problematic though only if read in a very basic way.  The objectification of the female members of the group is only part of the characters’ vision and not Kubrick’s.  Kubrick himself stays his usual, distanced but detailed self, showing an array of different sexualities and rarely passing judgement or comment on the actions that he films.  In Mulvey-ian terms, the scene is rarely, if ever, viewed through the male gaze of the camera, rather a male hierarchy enforced by the faceless characters.  In other words, very few viewers should find the visuals of the ceremony and mansion arousing if Kubrick has done his job.

The final touch to this scene is added by Pook’s superbly complex scoring.  The ritualistic elements are heightened through her ceremonial music; a mixture of eastern textures and reversed Catholic verses.  Though it is impossible to tell exactly what is being chanted because of this reversal, it creates the sense of sexuality being akin to a religion, building strong ties with ideas of occultist, Aleister Crowley and his sex magick.  It implies further that this ceremony is necessary for the group’s sexual needs, as if their lack of identity allows them a free pass to fulfillment.  This in itself draws heavily on occult practice, attaining to higher powers by losing one’s identity in order to become part of a group gestalt.  The fallout from William’s discovery at the event also has strong hints of occultism; that of the unwelcome outsider discovering the ritual.  The scene bears a fleeting resemblance to more pulpy occult pleasures such as The Devil Rides Out (1968) or The Witches (1966); both of which suggest ties between sexuality and an underground occultism.  The fact that William’s inside man disappears mysteriously is typical of Kubrick’s ambiguity but also suggests a strong underground coven whose sexual ties and hierarchy do not wish to be disturbed, if only for fear of the self-realisation of identity and the guilt that would encompass it. 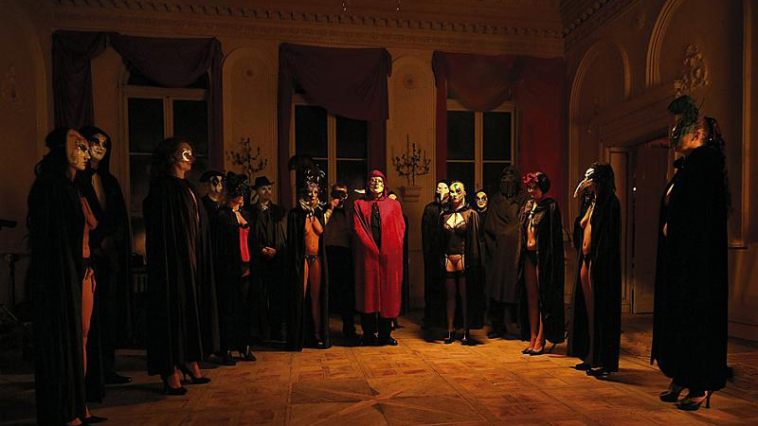