Emphasis on Acousmatic Concepts in Ross J. Fenimore’s “Voices that Lie Within”.

Like much literature around Psycho, Fenimore’s “Voices That Lie Within” begins its argument with setting the scene. “Psycho begins with a theft.”(2010, p.80) he begins as so many often do.  Very rarely is an argument about Psycho not in some way connected to its narrative structure.  While it’s difficult to comprehend the sheer madness of this narrative structure at the time of its release, it is often this eccentric structure that forms the basis for so many of the musical arguments.  This bias towards the film’s first third (the part of the film where the main character is alive) is one of the defining traits of Psycho‘s various analyses yet it is also a natural occurrence considering how much of what is of interest actually happens during that time.

Fenimore begins by using this first third to set up the psychological state of its main character Marion; this state being figured into the musical analysis throughout: “Marion, our protagonist, is in the midst of a moral quandary” (2010, p.81).  The real, overarching theme of Fenimore’s essay is to use a musically aesthetic stance to argue for a psychological one.  In this case it is the lack of cohesion between the sound world and visual world in an aesthetic sense that adds depth and legitimacy to the psychological reading; “The voices that lie within the body, imagined and realized – unheard and heard – are at the heart of what makes Psycho so thrilling.” (2010, p.81).

Fenimore goes some way into the theories of Michel Chion to discuss how the music and sound relates to the mental state of the film’s main character, Norman Bates.  After setting up the scenario of the psychological trajectory of Norman Bates, Fenimore begins to address this state with parallels in Hitchcock’s choice of sound hierarchy and Herrmann’s musical choices – “Chion recalls the fundamental tension within synchronized sound: though film attempts to hide this dualism, there always remains a tension propagated by the incision between body and voice.” (2010, p.82).  The implication of Fenimore’s argument appears to be that the voices, both out of body in the soundtrack and the musical voices of the score, are what makes Psycho so psychologically effective and “thrilling” for audiences, both then and now.  Hitchcock’s own view on the role of the composer would also go some way to backing this up: “When musicians compose a score, or orchestrate, they make sounds rather than music.” (1984, p.295).

Because of these two strands of “voices”, the analysis can be neatly split into two sections; that of the diegetic sound world voices and the score with various sub-categories of thought for each section making up separate arguments within themselves.  It seems as if Fenimore is emphatic on the reliance of the film on its use of sound and its “enveloping effect”, its success owing much to the allowing of viewer’s similar sub-conscious readings of these sound worlds: “Hitchcock’s proclamation of a viewing contract with the audience assured that they would adhere to the belief of cinema’s continuity (that you should see the whole film in one sitting, despite the unconventional narrative structure of the film.” (2010, p.82).

The analysis of the Chion-related “unheard voices” is where the essay is at its strongest, with the arguments about sound and visual synchronisation finding a perfect match to Hitchcock’s aesthetics.  This match is also constantly referred back to in regards to the film’s structure, seeming to reflect the narrative imbalance of the main character’s early on screen death and equate it to the odd relationship Marion has with her inner sound worlds in the brief time she is on screen.  He argues that “Psycho succeeds in building this tension because these fragments are not entirely reconciled.  Marion Crane’s death just before the first hour creates a fundamental imbalance in the film.”  (2010, p.82), later moving on to link this idea to the film’s score: “Bernard Herrmann slams shut the music’s subjective window and the score provides, instead, the aural kinetics of her death.” (2010, p.82).  It seems to want a “resolution” in a musical sense as well as a narrative one.

Fenimore also argues that the initial set-up of inner-world voices taking as much precedent as outer world diegesis, is a deliberate method to allow the logic of Bates’ mental state to be possible once revealed at the end of the film: “Here the elements of the sound design and score composition join.” (2010, p.84).  While Marion’s voices are impossible in a way that implies they are her imagination conjuring up the likely scenario of what is happening at the office she is fleeing, Bates’ voices remain a cinematic illusion of the presence of a second person.  This, in hindsight of a second viewing, allows Bates’ manifestations of his mother’s voice to be an “impossible embodiment” as in line with Chion’s sound theories: “Psycho explores a parallel situation of an impossible attachment of voice to a body, or what I am calling impossible embodiment.” (1999, p.140).

While Fenimore likens the mother’s voice as a ghostly presence, this seems to be a weaker way of forming argument:  “This aural sense of disembodiment conjures the figure of a ghost; without a clear indication of the voice’s source, the effect on the film colors a picture of the soul outside the body, but trapped by this sense of eternal wandering.” (2010, p.82).  He ties the sound hierarchy to the implication of the voice representing the soul in an apparent limbo of “eternal wandering” which seems far too simple as an implication and directly contradicts the more psychoanalytical methods he employs to analyse the musical score later on.  Herrmann’s score can simply not embody both this ideal and the later argued juxtapositions of the music in what Fenimore describes as the “mad house” scene’s music.  It is simply too much of a contradiction of aims.  In contrast, Chion’s relatively similar aims are achieved in a far more straightforward and cohesive manner, arguing the following- “The voice and the image can only appear as cut apart, they cannot consummate their reunion in a forever lost mythic unity.” (1999, p.151).  While Chion’s theory seems logically sound, Fenimore’s by contrast again suffers from the pitfall that Murphy fell into; that of stretching their ideas around the musical text to the point where it seems almost desperate for its inclusion.

Where Fenimore’s arguments are most cohesive are when he ties the narrative cogs to this sound world rather than when he ties the emotional implications to the characters.  Reading the film in this way, the sense of importance that Fenimore attributes to this sound world is logically correct, with the film’s narrative almost impossible to imagine without it being set into motion by Bates’  “imagined voices”, Herrmann’s music and Hitchcock’s rendering of them in the sound mix.  This is backed up when Fenimore argues that “Herrmann sharpens Norman’s knife.” (2010, p.93).

Moving on to Fenimore’s analysis of the music, his take on the score is a mixture of the previously mentioned ideas and a somewhat forced view on its sparse use within the film.  Unlike other readings of Herrmann’s music (especially in contrast to our first article), Fenimore sees a large amount of the score as creating a similar effect to the detached voices.  This suggests that the key to Herrmann’s score is when it is used rather than how (in spite of some basic musical analysis towards the end of the article implying the opposite).  “We do not hear her vocally, but the underscore signals a stark subjective shift, and Anthony Perkins accentuates his performance to reveal a second voice speaking from within.” (2010, p.91) is how Fenimore interprets it.

Herrmann’s score is said to provide the viewers themselves with their own detached voice; to be establishing “the principle imagined voice for the audience” (2010, p.85).  While some of the musical analysis does support this reading  (indeed, the musical reading of the rapid changing motifs as a parallel to Marion’s inner voices showing the “spiralling morality” of the character does seem to ring true), it seems far too all encompassing and forced to be taken as a definite: “The rapid shift through these metrically disparate motives illustrates the powerful rhythmic play at work as the first few minutes of music establish the out-of-control spiralling of Marion’s morality.” (2010, p.86).

Fenimore therefore has to cover some of his arguments, especially when music is used in scenes that do not relate to his main arguments.  When he labels the music for the “madhouse” scene as being an essential juxtaposition, he quickly has to re-assert that the music does appear in another moment in the film, albeit “only briefly” (2010, p.92).  This suggests that, while the reading does carry merit, especially in the context of the inner diegetic voice argument, it would be wrong to carry the reading through to a more all-encompassing reflection of the film’s overall use of music. 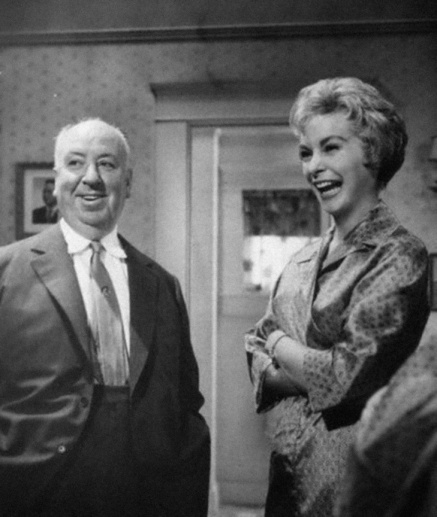