When looking into the history of film titles, there surely cannot be one more controversial and loaded than The Texas Chainsaw Massacre? It’s a vicious, daring piece of marketing that implies what’s in store is something altogether grim and deeply disturbing as well as graphically violent.  Thankfully the film in question is far more intelligent than that and is most definitely not to be confused with the recent remakes and sequels which rehash the story, adding nothing to it but more realistic and gory effects.

Along with Wes Craven’s Last House on the Left and John Carpenter’s Halloween, The Texas Chainsaw Massacre can be seen as an extremely influential piece of horror film-making from the 1970s.  It comes from a time slightly before the era of “Video Nasties” but in many ways can be seen as a direct influence on those cheap but controversial films.  Many of those films, in particular the cannibal series of films such as Cannibal Holocaust and Cannibal Feroux, are simple and raw. However, here we have a film that touches on political allegory, taught thriller ethics and manages to combine the two into something that is not only scary but also extremely watchable.

The most disturbing aspect of the film is the title itself.  The images it can conjure up are far more distressing than what is actually on show.  Tobe Hooper was a skilled director and it seems the title was more of a challenge to the established censors than anything relating directly to the film.  In the story itself we are only concerned with the fate of five teenagers who wander off the beaten tracks of out back Texas only to stumble on a family of cannibal murderers.  This in itself can seem like quite a clichéd plot when faced with today’s horror but considering this was the first film to do it with such success means that all the scenarios that unfold have a fresh and daring feel to them.  Adding to the infamy, it’s said to be based on “factual events” which further adds to the dread when waiting to watch it.  However, like Hitchcock’s Psycho, the truth has been greatly stretched for the cinematic pleasures of the audience and looking at the extras on the disc only proves this further.

The film itself still has the power to shock though and all this talk of just having a powerful title doesn’t diminish the film’s effects.  Though the family aspect is only introduced later on (connections to earlier characters are also made) the main character in the film is a debatable topic and one that adds further to the films disturbing effect.  Only one of the teenagers is left in the final segment of the film and her role is often considered to be centre stage.  However, watching the story again, the chainsaw wielding killer Leatherface is a far more interesting character who, while has little screen time compared to the teenager, is just as drawn out and characterised.  In many ways it’s just as bad a day for him as the teenagers and the genuine fear in Gunner Hansen’s eyes after he’s killed the first two teenagers is touching yet disturbing, almost asking us to feel sorry for this brutal and primitive of killers.

In the end, the film is not the gory horror fest that it’s often made out to be.  People die in the film in obvious excruciating pain and often in horrific ways such as death by chainsaw, being hung alive on meat hooks and smashed over the head with a hammer, but what we see is tame by today’s standards.  There’s little, if no blood.  Hooper cuts away from all of the potential gory entrails which latter day directors are so obsessed with lapping up and yet the film still packs a punch.  This is far more to do with the sound and the soundscape of the film in general rather than the potential for excessive onscreen slaughter.  The screams feel spine chilling and real.  These are not Hollywood screams, or straight of RADA voice control.  They feel lost, genuine and most importantly, make the danger the characters are in seem real and not something just casually set up.  Even the soundtrack itself is made up solely of metallic noises and twisting sound bites adding to the butcher’s shop ideal that the family live by.

The final shot of the film is graceful and almost beautiful and it’s something that is rather puzzling in its execution.  We feel a sense of relief at the final teenager’s outcome but the film is more interested on Leatherface who is almost dancing with his Chainsaw as the beating Texas sun begins to rise for another day in the hellish life of the best movie monsters since Karloff’s monster. 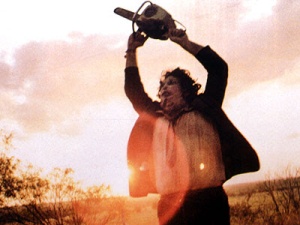 For a one-disc release, the DVD itself has some wonderful extras.  The first and most interesting of these is the 72 minute making of documentary which shows the gruelling shoot that making The Texas Chainsaw Massacre turned into as well the so called “Shocking Truth”.  In reality the film (along with Psycho and The Silence of the Lambs among others) is loosely based around the famous killer Ed Gein.  Though he really doesn’t count as a serial killer, his house was full of furniture and ornaments made from corpses dug up from the local cemetery in the same way the family’s house is.  Both of his only known about killings are shown in horrifying detail with footage and photographs of his only known crimes being far more distressing than anything a horror film could deliver.

Along with a whole host of cast and crew interviews, a full audio commentary and deleted scenes; there are some rather charming outtakes, a wonderfully cheesy trailers and also trailers for the proceeding sequels that all look brilliantly awful (including The Return of the Texas Chainsaw Massacre that hilariously stars Rene Zellweger pre Bridget Jones…).

The Daily Mail, famously said “if ever a film should be banned, this is it”.  Though of course it would take someone from a tunnel vision right-wing background to not see the artistic and creative merit on show in this timeless shocker. It’s definitely a film that is not to everyone’s tastes and even if it is sitting in the DVD of the week position, The Texas Chainsaw Massacre will always be a film of brilliant, subversive controversy as well being a horror film that may perhaps be too much for those unfamiliar to the genre itself.