Director Digby Rumsey sees his BFI DVD debut this month on the Flipside release of Leslie Megahey’s Schalcken the Painter.  Rumsey is a traditional BFI director, coming from the same ranks as Terence Davies, Bill Douglas and Peter Greenaway.  His work in Gothic short films, especially adaptations of work by Lord Dunsany, places him firmly in the British Gothic traditions of directors such as Jonathan Miller and Lawrence Gordon Clark.  With The Pledge about to find a new audience, I tracked down Rumsey to discuss his work in the Gothic.

When did you first decide to go into filmmaking?  Were there any particular moments, films or directors that gave you your initial enthusiasm?

As a boy in the 1950’s, my mother regularly took me to the cinema to watch the Pathe Newsreels. I have always loved big Biblical epics such as Ben Hur and I have the greatest respect for everything that Mêlées produced.  Jason and the Argonauts is a personal favourite.   In my teens, I wanted to act professionally, and at the end of the 60’s I was working with the Quipu Basement Theatre in London.

But I quickly realised that an actor’s life was a precarious one and managed to get a place at the London Film School.  Everybody wants to direct, but of course that is unfeasible, and I was advised after graduating, to start work as an Assistant  Film Editor in the cutting rooms of Soho.  I was making zero budget films for a few years when I became obsessed with a genre of literature, which is known today as ‘High Fantasy’. This body of work was initiated by William Morris in the 1890s and has continued through the 20th century to Tolkien’s Lord of the Rings and beyond.  By 1974, I had already travelled to Hollywood to try and sell my vision of “Fantasy films”, but as in England, the concept was ridiculed. However, I continued to produce films intermittently, financed by my freelance editing work. These were short films I adapted from stories by writers like Lord Dunsany, Ernest Bramah, Robert Louis Stevenson , Nevil Shute and James Hogg.

The Pledge, which is released by the BFI on their Flipside label next month, is drenched in the Gothic.  With it being an adaptation of a story by Lord Dunsany, did you focus more on his ideas or your own?

In my adaptations of writers I admire, I have always tried to interpret their words/stories as literally as possible. This is what the screenplay gurus tell you absolutely NOT to do when adapting books for the screen. So I would like to think that apart from a little extra dialogue, I have been very faithful to Dunsany’s original story.

The Pledge is released also alongside Schalcken the Painter; another Gothic tale.  Looking at the creative Gothic output that had gone before The Pledge, it seems to be part of a larger Gothic revival in the short form, stemming from a number of BBC adaptations by the likes of Jonathan Miller and Lawrence Gordon Clark.  Was there a sense that the Gothic was something that had endless potential at the time?  Do you feel there’s still more to explore now?

The Gothic novel is most often set in a foreign country (usually Italy or Spain) in a barbarous medieval past, with plots that characteristically involve evil, (often Catholic) ecclesiastics, beautiful heroines, handsome heroes, imprisonment in dungeons and convents, the evil (sexual) older woman, wild scenery, castles and ruins. These themes should be familiar to aficionados of Hammer films and have been heavily exploited, but what really attracts me to the genre is a book like James Hogg’s “Confessions of a Justified Sinner” in which the hypocrisy of religion and the damage it has (and continues to) cause to mankind, is malevolently explored by a man seduced by the Devil.

The Pledge is only one of a number of Lord Dunsany adaptations by yourself.  What is it about that writer’s work in particular that draws you in?

In the 70’s and 80’s, I was attracted by his anti-industrial and environmental stance and he also had a very interesting take on Death, which was a major preoccupation in many of my films of that time.

Watching The Pledge, there are a number of striking uses of landscape, especially the recurring use of the hillside location with the hanging man.  Is landscape something that you are interested in using in film?

I have always used a lot of landscape in my films and I love to position Man as dominated by it – just to remind us all how insignificant we really are against the forces of Nature. 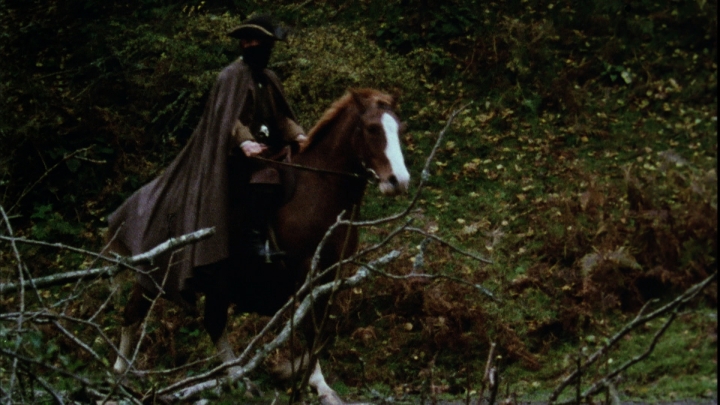 Michael Nyman provided the score for The Pledge. How did this working relationship come about?

Peter Greenaway was the picture editor on The Pledge and he suggested the Nyman score. The music had already been recorded but had not been previously used – naturally I was delighted.

You were also editor on Terence Davies first film Children.  How did this come about?  What was working with Davies (or any of the other mentioned directors) like?  Do any of them share parallels with your own creative ethos?

In the 70’s there was an unofficial agreement between the BFI Production Board and graduates from the London and National Film Schools. Many of us crewed those BFI productions and I worked both as Sound Recordist and Editor on Terence Davies’ first film, “Children”. It was an intense six weeks with Davies staying with us during the edit.  Over the next few years I recorded sound for both Bill Douglas and Peter Greenaway and all three directors influenced me with their use of Mise-en-scène.

What future or current projects are you currently working on?

I am currently working on a full-length documentary about the life and work of Lord Dunsany to be released early in 2014.

Schalcken the Painter is released by the BFI on the 18th of November.

A full review of the release can be found here.

Digby is currently filming a feature length documentary about Lord Dunsany.  More information can be found on his website.

One thought on “Interview With Digby Rumsey (BFI Flipside, The Pledge).”