A white girl lay on the grass

With her arms held out for love;

her goldbrown hair fell down her face,

And her two lips move:

See, I am the whitest cloud that strays

Through a deep sky:

I am your senses’ crossroads,

where the four seasons lie.

She rose up in the middle of the lawn

And spread her arms wide;

And the webbed earth where had lain,

Had eaten away her side.

While writing a lot about folk horror as a genre has allowed for a number of criteria to be set when deciding how to classify what can come under the term, a separate group of ideals has found a match together in different media that simply must be discussed.  In a previous article, one of the arguments for folk horror was emphasis put on the isolation of communities of people and the effect (horrific or otherwise) this had on their actions and beliefs.  In some ways, what is to be discussed here can be seen as an off shoot to that idea but whereas that idea could be applied to cinema and culture outside of Britain (such as in the films of Kaneto Shindo or Tobe Hooper), Village Green Repression is distinctly British.

The idea first came to light while watching the BBC Play for Today Robin Redbreast (1970).  James MacTaggart’s play is said to be a precursor to The Wicker Man (1973) but is more than simply a dummy run. What Robin Redbreast shows is the distinct action that repression in modern village life can lead to. (the key being on the word modern hence the exclusion of period films such as Witchfinder General (1968) and Blood on Satan’s Claw (1971))  This isn’t merely the basic absence of a more social lifestyle but a distinct repression of basic sociological avenues.  This allows the repression to release in different areas with the erotic finding its way into more twisted and violent acts.

Robin himself is being used a “bull” in a sexual and ethnographical village ritual being forced upon our main protagonist.  It’s hard to imagine this sort of action being taken by the small number of villagers involved if their vices were satisfied in a more busy, urban environment.  The same goes for Robin Hardy’s The Wicker Man (and even Penda’s Fen (1974)) even though that village in particular is cut off in complete isolation.  This isolation has created a sexual repression in its inhabitants but the film focuses on a time after this repression (shown visually by the dilapidated Christian church) when villagers are seen to be having sex public places, teaching their children about phallic symbols and jumping over fires naked.  The film is focussing on the release rather than the repression. 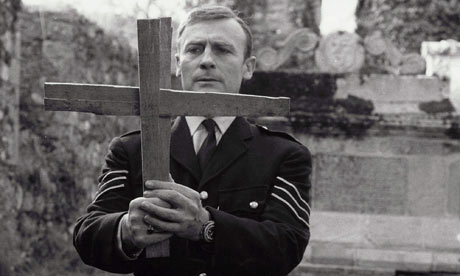 The repression can take an almost comedic turn as it does in several Amicus portmanteau’s especially in the segment from Tales That Witness Madness (1973) where Michael Jayston’s character becomes obsessed with a tree which he carves into a women that eventually comes to replace his wife (Joan Collins).  It seems almost polar to the argument with the environment appearing to allow him to express his repressed feelings but the question of how the character felt this way in the first place more than makes up for it.

This repression can find itself in other media as well.  Television is the great, modern home for this sort of reaction and has been since the 1970s.  The last BBC Ghost Story, The Ice House (1978), has undercurrents of eroticism bleeding out from its vaguely haunting tale.  Its setting in an isolated health spa seems at odds with the argument; this is surely a location for rich city dwellers?  It is also the weakest instalment in the original series but the fact that its writer John Bowen who also concocted Robin Redbreast ties it in nicely.  Outside of this though, the repression manifests in more comfortable forms for the desensitised viewer.  In Campion‘s first TV story, Look to the Lady, he is sort to help protect a fortune from a village’s apparent occult manifestations.  Though this turns out to be a ruse, it is a ruse dreamt up in isolation and only made believable by its location.

The same branch of thinking pre-dominates the villagers of Midsomer in Midsomer Murders; perhaps the most unlucky and repressed location to be discussed.  Here, these repressed feelings manifest weekly in the entertaining murders that befall its seemingly endless population.  If this is all sounding a tad vague and loose, then it’s best to turn to literature as our final port of call.  This ideal is hard to define as it bleeds so healthily into the arguments made for folk horror definitions.  The poetry of Philip Larkin however does no such thing.

Next to lines such as:

The clouds cast moving shadows on the land.

Are you prepared for what the night will bring?

The Stranger who will never show his face,

But ask admittance, will you greet your doom.

The clash of imagery is best felt in his episode of Monitor that puts the visuals of what is discussed next to the ideas of Larkin’s prose which he reads over as narration.

In his poem Sad Steps, it finishes on:

Is a reminder of the strength and pain

Of being young; that it can’t come again,

but is for others undiminished somewhere.

This somewhere is a longing for escape from British repression, found at its height in the picturesque, idyllic country village.  Larkin’s poetry sums up a number of the films and television mentioned.  In The Trees, Larkin stresses the following:

Yet still the unresting castles thresh

In fullgrown thickness every May.

Last year is dead, they seem to say,

This little verse could easily be summing up the villager’s view in Robin Redbreast or even the islanders view from The Wicker Man; that people’s sexual awakening is a yearly thing, put to use in some way when in a repressed community, especially in that of an English village.  The manifestations in David Gladwell’s Requiem for a Village (1975) show this to be a symbolic case of desire, even possible in the uncomfortable climates of the likes of Sam Peckinpah’s Straw Dogs (1971).

In the end though, Larkin sums up this intangible set of circumstance best in his endlessly stunning poetry.  It is best then to leave the last words to him from his poem May Weather:

So awkward was this May

Then training to prepare

Upon whose every day

So many ruined are

May could not make aware.

Other articles of interest:

A Brief History of Folk and Occult Horror.

The Wicker Man – Defining of the Folk Horror.

The Devil Rides Out (Hammer Horror).