The above quote from Hammacher’s work on Hepworth is an interesting one. To break it down requires some context within the parameters that it sets up for Hepworth’s working relationship with the landscape.  What could be the difference between a “feeling for landscape” which is apparently inconsequential to her work and “the relation of the creative individual to nature”?   The latter is more abstract and though similar to the “feeling for landscape” can be thought of as something more reactive to the ineffable senses that are sparked when immersed in such places.  It is this ineffable quality – that same quality in Hepworth’s sculptures that naturally imply a greater surrounding through their design (moulded by faux natural forces) – that can connect her work to more esoteric examples that use natural and unnatural monuments found in the landscape.

Yet, Children of the Stones is not necessarily the first that springs to mind.  In Alan Garner’s story The Owl Service, a single standing stone known as The Stone of Gronw, plays a key role in the visual perception of the narrative and invokes an almost opposite to Hepworth’s sculptures in a useful control role: instead of implying a landscape (perhaps because it is always deep within one), the stone’s Hepworth-like design implies the detailed narrative of people, specifically the folkloric tale of The Mabinogion.  In the book’s subsequent television adaptation, the hole carved in the stone plays two key roles.  The first is to tie in to the folklore, having been supposedly created by the spear thrown by a spurned lover.  The second is much more key in discussions of Hepworth’s work. 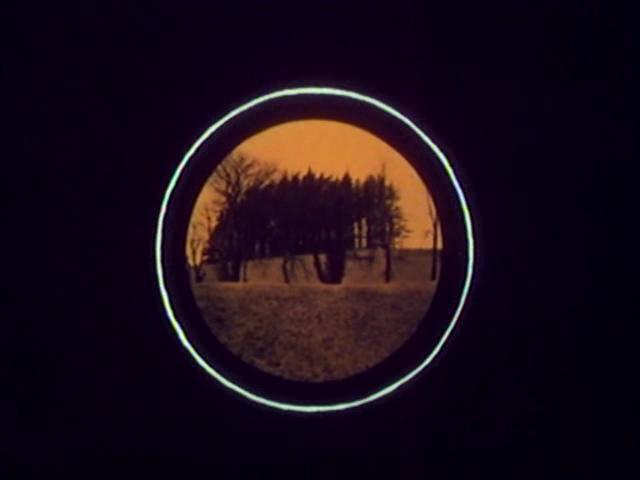 Within the narrative, the vision through the stone’s single, carved hole has plays a key role (which is more readily obvious through the television adaptation).  Roger (Francis Wallis), who is step-brother to Alison (Gillian Hills) and stuck oddly in the middle of a spiritual love-triangle manifesting itself through the spirits of Blodeuwedd, is keen to photograph the vision through the stone.  Its hole alters the perception of the view, framing a near-by forest within its circle and providing Roger with an interesting composition for his photography hobby (which is shown to be a clear passion of his).  When he develops the photos, however, he notices what looks to be a man throwing a spear; the character from history and folklore somehow manifesting on his film.

Essentially the stone provides what appears to be a visual gateway back to this past dimension, though oddly only alighted as such when captured through analogue technology (a common occurrence in fantasy television of this era in particular).  Roger’s relationship with this natural stone sculpture could very simply be read as similar to Hepworth’s in showcasing “the relation of the creative individual to nature.”  Perhaps The Stone Of Gronw is the ultimate in examples of Hepworth-like design, where its ridges and passages are not only reactions to the landscape but provide aesthetic gateways to visually alter it as well.

Moving back to Children Of The Stones, there at first seems little in the way of aesthetic ties to Hepworth’s work.  The stones featured in the narrative (which are a mixture of real and fake) are not only absent of potentially visual passageways and holes to provide such alterations to the landscape around but the said landscape is in the town of Avebury (renamed Milbury); the landscape may be rural but it is far too inhabited to capture that same initial sense of endless terrain as Hepworth’s initial landscape inspirations.  It is in the fantastical elements that Milbury’s stones channel some of Hepworth’s ideologies.

This stone circle has access to the powers of a black hole, harnessed both by the past ancient pre-Christian shamans (shown in the painting that initially brings Adam Blake and his son to investigate the physical powers of the stones) and by the modern day village leader, Hendrick, who has unwittingly stumbled upon its powers to remove free will (or at least any potential for negative thoughts and emotions).  Perhaps some basic parallel could be read into the emotional manipulation of the occupants of Milbury and the very role of sculpture but it is not the chief aspect of concern; it is the access, in this case very literally, to another, higher realm that is implied.  Hepworth’s sculptures are always tied to human hands but what those human hands were actually doing within such landscapes and stone monuments is enjoyably open to interpretation.

The link between the present and the past is always a given when dealing with such monuments.  The previously mentioned painting from the program provides the notion of tapping into the ancient, just as Hepworth does in her work albeit more unconsciously than the fictional characters of the programme.  Hammacher surmises the following:

“Sculpture”, Barbara Hepworth has said, “is a three-dimensional projection of primitive feeling: touch, texture, size and scale, hardness and warmth, evocation and compulsion to move, live and love.”  And of landscape: “Landscape is strong – it has bones and flesh and skin and hair.  It has age and history and a principle behind its evolution.” (p.97)

Both her sculptures and the stones mentioned as the basis for the fictional narratives possess the quality of “a three dimensional projection of primitive feeling…”, whether it be transporting the viewer in a gallery to a windswept vista in the landscape of Cornwall, allowing access to ancient times of pre-historical rites or as a portal, tapping into the astrophysical forces of some greater power, far away and immeasurably dynamic.

3 thoughts on “Uncanny Portals And Standing Stones (Children Of The Stones, The Owl Service and Barbara Hepworth)- Part 2.”