The building of form within the space of landscape has become a common occurrence in sculpture for a number of years now.  The moving of artistic forms out-of-doors provides so many new potential contexts that it seems almost puerile to suggest so.  One aspect of particular interest is when these new forms of Earthologistic sculpture come into contact, perhaps even competition, with older forms of cultural landscape anomalies such as ancient, theological monuments and more natural formations of stone, withered down by the wind and the sand to form something that aesthetically seems “created”.  When artists deal with such contrasts, something else appears to be tapped within the work; something that not only seems familiar but also deeply unfamiliar in the sense of irrational agitation.  It is here where links between the high-art of 20th century sculpture finds a surprising link with more pulp pleasures of fantasy, especially in television.

Barbara Hepworth is the chief example to be examined here and, though more high-minded art critics may venture towards transcendental readings of her work, many of her sculptures are to be easily aligned here with the ideas exuding from the cult television program, Children of the Stones (1977).  At first, it may seem like tawdry fit in that there is one obvious connection; that both Hepworth’s work and the series use objects in the landscape (as well as reactions to the landscape) to hint towards some ineffable occurrence beyond human capacity to fully relate.  In Hepworth’s case, this is human feeling and emotion while in Children Of The Stones it is something genuinely otherworldly (specifically, the transmutative power of a black hole to erase evil thoughts from people, harnessed through the stone circle of Milbury, standing in as a namesake for Avebury).

Through the reasoning of Freud’s uncanniness, the philosophy of inter-dimensional portals and the concept of the eerie arising from the mixed relations with objects within the landscape, the two bodies of work will be shown to have far more in common than mere root causes.  Not only will this allow a fresh perspective on the thematic launch pad of Hepworth’s creative framework, it will also highlight just how layered and interwoven the thematic ideas behind Children Of The Stones actually is as a narrative: where forms from the natural landscape express an animism that seems deeply rooted within the British isles.

Landscape has played a clearly pivotal role in Barbara Hepworth’s sculptural work but one that is perhaps often given a slightly different emphasis in hindsight as opposed to the actuality of her artistic exudation of it.  Though oft-quoted as being part of a will to express the sheer affect that the human body feels when in the vast (and almost consistently English) rural landscape, the role of such a theme in the process of her work is two-fold; the sculpture can be seen to be equally a cross-over between the land formations surrounding Hepworth and the desire to express and share these feelings.  In A.M. Hammacher’s book on Hepworth, he suggests as much stating:

Emotions have contributed to its creation and a feeling for landscape has contributed to these emotions.  But once they have become form, they cease to be nature and are of a different order. (1968, p.94).

He later goes on to argue that:

That is to say, however splendid Cornwall may be and even though the evocative names of local places form the titles of her works, in the sculptural process, it is man, not the landscape, who triumphs. (1968, p.95).

It is worth considering for a moment what this combination actually means, especially in the context of more fantastical uses of landscape.  Hammacher is somewhat incorrect in his assertion that the two aspects of man and landscape are in some sort of conflict.  On the contrary, Hepworth’s sculptures show the presence of one within the other but does so through the channelling of the ancient and the oddly familiar.  This could be tied to several places, especially in Cornwall, having an influence on the sheer designs of her later sculptures in particular.  J.D. Bernal used it as an introduction to her work, suggesting the following:

She has reduced her sculptures to the barest elements, but those elements correspond curiously enough so closely with those of neolithic art that it is in comparison to them that we can best describe them. (1937).

Yet, as Hammacher points out, this was simply not the case in Hepworth’s early years: “At the time Barbara had not yet got to know Cornwall.  No one at that juncture – at the outbreak of the war – guessed that landscape was to play so important a role.” (1968, p.64).  It can be assumed then that the resemblances between Hepworth’s sculptures and the surrounding topographical features (Men-an-tol for example), is more complex than it first appears.  What then can be the case for such reactions to the landscape?  Like Men-an-tol (as well as the circle in Children Of The Stones), Hepworth’s work is channelling some form of animism through the bodily action of creation and presence.  The work, when placed within the landscape (as in the short film, Figure In The Landscape (1957)), feels oddly familiar and is not impossible to conceive as something naturally formed out of the earth because of this.

A sense of the Freudian uncanny comes into play as, like the stone monuments (whether created by people or through geological processes such as erosion) have a sense of human hand upon them that is somehow familiar (and often in areas that are vast enough to aesthetically imply the absence of people in the first place).  Hepworth taps into this clash and its uncanny nature, whether consciously or unconsciously in order to channel this sense of unease of recognition into the viewer; her sculptures become markers for reactions of people unseen to the place in which they (occasionally) are allowed to sit.  When in the white walls of a gallery, this sense is greatly diminished, requiring the landscape to form a priori as a reaction to the work itself first before such a sense can occur.  In Children Of The Stones this unease has a just and narrative cause, that of Rafael Hendrick (Iain Cuthbertson) channelling the same powers of a black hole used by ancient man.  The stones are given the sound of an ancient chant in the program’s opening title sequence which raises the same sense of affect created through Hepworth’s work into something with such a level of uncanniess as to be potentially terrifying. 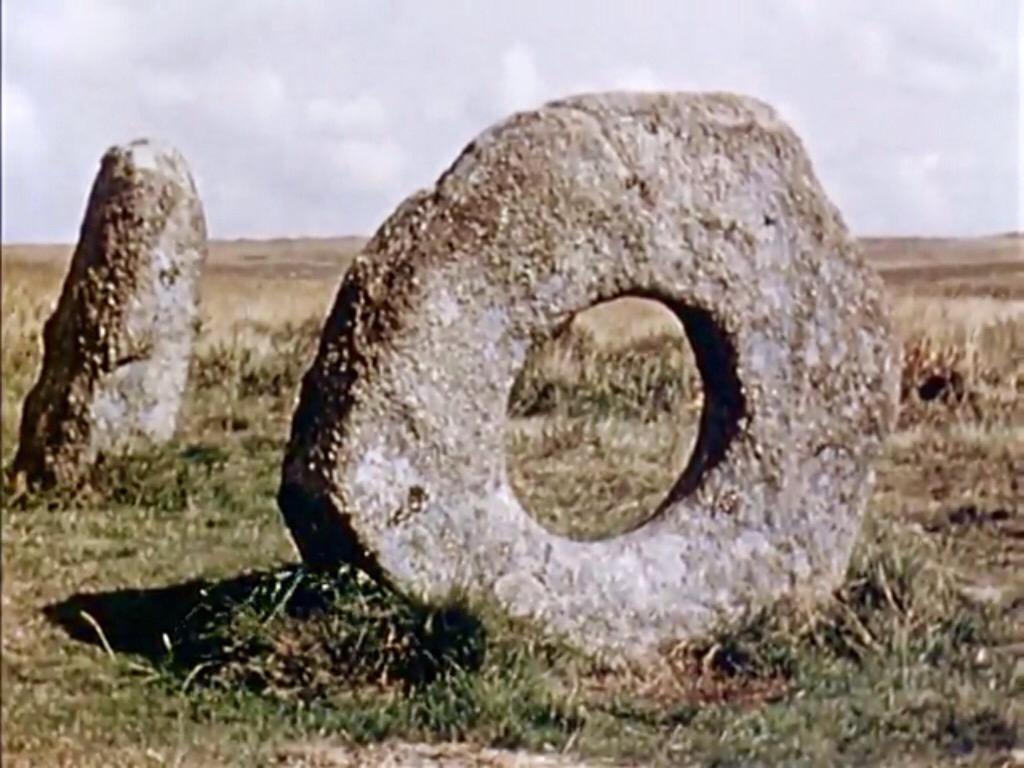 3 thoughts on “Uncanny Portals And Standing Stones (Children Of The Stones and Barbara Hepworth)- Part 1.”