The characters of Nigel Kneale’s work rarely like the “outsider.” The drama of his plays is often built around small groups of people at odds with (or at least representational nationally of being at odds with) some concept of the outsider. The oppositional group will be diametrically opposed for a variety of reasons; sometimes for more pulp tendencies such as aliens in a space invasion scenario, to the far more recognisable images of townspeople entering closed rural communities. The research group in The Stone Tape (1972), for example, seem to envisage an unseen enemy in the form of their Japanese competitors whilst a town vet in Murrain (1975) is treated with disdain for disbelieving rural, local superstitions about a supposed witch putting a curse upon the cattle. Not only do these beliefs build up tension within Kneale’s dramas but often they show strong links to the landscape in which the stories are set.

The best example of this narrative device, however, is to be found in the various adaptations of Quatermass II made by the BBC in 1955 and later into a film by Hammer studios in 1957. Kneale’s tendency for such a narrative device can be seen to be derived from a number elements but the most obvious and predominant is the political climate in which he was writing. His general themes stem from the emphasised “Island Mentality” brought about due to the Second World War; a time when the outsider was necessary to demonise if only for more general propaganda (think of Ealing’s Went The Day Well? from 1942). This type of thinking is at its strongest in times of conflict or post-conflict and is an extension of “narrow nationalism” as Anthony Giddens suggested in a column for The Guardian:

“The narrow nationalism of Thatcher and Tebbit is exactly the kind from which we on the left should be trying to break away, as well as from the “island mentality” on which it is based.” (The Guardian, 14/10/2007). 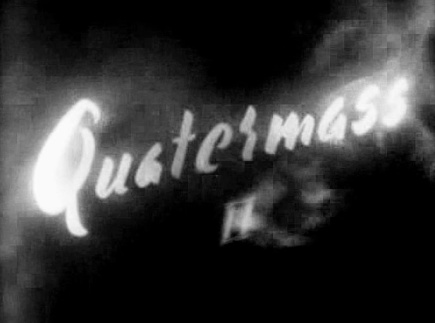 Add to this the paranoia over the increasingly volatile state of the Cold War and the Knealian formula seems to be an expression of the state mentality for the entire United Kingdom in the 1950s. Kneale himself said as much in the introduction to the script published in the 1970s:

“It was 1955, an uncomfortable time. There was much public concern about a new brand of bureaucracy, which manifested itself in the form of secret establishments: giant radars reputed to endanger human life and concealed huge plastic pods; germ warfare establishments behind barbed wire; atom-proof shelters for chosen administrators.” (1979, p.6).

Quatermass II fits into this model well as it showcases a range of different effects of the supposed “outsider” which seem to predominantly augment the state of the English landscape. It must also be remembered that Quatermass as a character (at least in the television adaptation) is himself an outsider after the scientific and moral failures of his own experiments in the previous instalment, The Quatermass Experiment (1953).  Perhaps the lack of support for the character from various officials throughout the narrative is due to this position but it does seem rather ironic: “Quatermass himself would be the lone figure, doggedly worrying his way through officialdom’s barriers and pat explanations to get to the horrifying truth.” (Kneale, 1979, p.7).

Quatermass II is concerned with the fate of Winnerden Flats, a rural community that has been virtually flattened and modernised to make way for a suspicious “food production plant” which turns out to be harbouring a special environment for an ammonid alien creature. This location presents a number of intriguing problems for Kneale in regards to the outsider and the landscape. In spite of much intrigue occurring at higher social levels such as in government and at Quatermass’ own rocket research laboratory, the real drama occurs when Kneale moves the narrative to the desolated plains of the rural community as it gives him the opportunity to use the concept of the outsider as a dramatic boost of tension (even when the outsider is the drama’s main protagonist).

In typical Kneale-esque fashion, the fear of outsiders from the city are proven to be fallible; they have the means to uncover the uncomfortable truth about the project the locals have been blindly working on. In a twist of sardonic wit from Kneale, the close-knit rural community of the village are themselves harbouring an outsider from space, a creature that intends to colonise the entire planet once it has grown from the meteorites that have been falling to the earth. In his viewing notes for the plays, Andrew Pixley highlights the problematic mindset that Kneale felt was becoming the norm society because of this blind and unquestioning nature: “At the time, Kneale was very concerned that people took too much on trust from the authorities. Grasping the sense of paranoia about new, potentially dangerous scientific establishments, he wrote of what could happen if an apparently beneficial advancement or research site was in fact in the hands of the enemies.” (2005, p.16).  The main aspect to point out from all of this is that the core belief of the isolated Knealian character is that outsiders change (or at least want to change) the environment to suit their own needs for the worst.

It’s a logical extension from seeing the “outsider” of World War Two flattening the cities of England with its bombs but fails to see the help provided by outsiders too; it is a paranoid world view but one that makes for great dramatic tension. The outsider, in both the context of people from the city and the creature from out-of-space, have destroyed the local environment and placed guards around its occupied area. It’s not hard to draw comparisons with both the evolution of the Bloc States and the increasing state of paranoia over nuclear war; the people outside your community have the power to not only adapt your environment for their own needs but also have the ability to completely destroy the landscape if they wish. It was the ultimate in national state paranoia.

Kneale would move into the complete opposite of territory for his next instalment of Quatermass. In Quatermass And The Pit, Kneale would suggest that the evil was here before humanity rather than from somewhere outside some psychologically defined realm, going so far as to suggest we were all formed from aliens: we are all outsiders.  This may perhaps have been due to the evolution of the world around him but there’s little doubt that Kneale channelled a great, national paranoia in his work, especially because the very essence of the land was under such a tangible threat of extinction.