This November sees the 50th anniversary of one of Hammer Studios’ strongest and most complex films: Roy Ward Baker’s Nigel Kneale adaptation, Quatermass And The Pit (1967).  Sometimes known under the title of Five Million Years To Earth, the film takes Kneale’s BBC script from the original broadcast serial and turns it into something far more unnerving than the other films produced by the studio in this period.  For Kneale’s script may be full of pulp imagery, typically fantastical jolts and the dramatic tension often associated with studio but, as normal for the writer, there’s an underlay of genuine nastiness; a pessimism born of the politically troubled post-war period during which the writer came to prominence.  The film has aged fantastically, not least for Kneale’s Ballard-like ability to address consistent social problems and ills, but also for its transposition of more typically rural ideas (the old ways, buried objects, superstition etc.), into the most urban of realms. 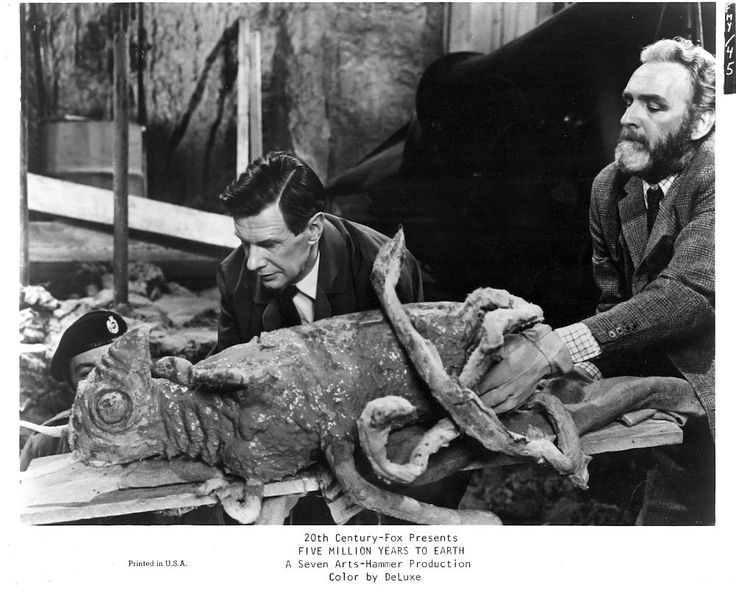 Kneale’s work is often discussed in light of the movement of Folk Horror and there’s little doubt that a huge body of his work sits in relation to the genre.  However, Quatermass And The Pit seemed, at least when I was trying to account for it, a problem.  It had some of the folkloric elements typical of the genre – old memories leaving traces through word-of-mouth and places names – but its setting went directly against any ideas previously conceived ideas concerning the genre.  In this sense, Baker’s film can be seen as one of the first fully-fledged examples of the Urban Wyrd; the closest equivalent to Folk Horror that deals in an equally folkloric sense of the eerie but within urban settings.  As with Folk Horror, the Urban Wyrd plays upon the excretions of the urban landscape, acknowledging that cities have been built out of more than bricks and mortar but out of belief, superstition and an equally prevalent violence.

Very much like later Urban Wyrd films such as Theatre Of Blood (1973) and Death Line (1974), Quatermass knows that there is more under the surface of London in particular than its clean, territorial rewrites of today belie.  Alongside the seeming innocuousness of the tube station (something again played upon in Death Line as well as Creep (2004) and the Doctor Who episode, The Web of Fear (1968)), something inherently evil lies within.  It is not simply a dramatic device of Kneale’s to have the Martian spaceship exhumed from an urban setting; it is an essential placement to begin the film’s commenting upon the true nature and character of humanity.  Kneale could easily have set this story in some rural territory (and effectively did in his episode of Beasts, Baby (1976)) but the questioning, raised here through the Urban Wyrd, would not have been the same.  Cities are collecting jars of traumas, memories and ghosts.  Kneale knows this and takes full advantage of it in his script.

Fear is an essential part of Quatermass And The Pit, not so much because it is a horror film but because the trace of fear within the narrative is what first alerts Professor Quatermass (Andrew Keir) to something awry in Hobb’s End.  The folklore of this cramped and confined space – perhaps the most claustrophobic presentation of London from this period of cinema aside from Roman Polanski’s Repulsion (1965) – is one built almost entirely upon fear.  The stories that have been passed down regarding Hobb’s End are entirely narratives of people’s unspeakable fear of supposed ghosts and demons.  The fear is a key factor because of what it later signifies; the reuniting with an inescapable strain of hatred, a race memory itself derived from a violent fear.

The first reaction when coming to terms with this realisation for the characters is to be fearful.  When the drilling expert unexpectedly awakens the psychic energy of the Martian ship, his possession of fear literally carries him through London until he finds sanctuary in a Kensington church.  He is rendered virtually useless by his encounter as this is a fear of realisation as much about ourselves as about the unknown.  Or, perhaps in that typical way of Kneale’s, the unknown is at its strongest when we consider our very beings, our place in the world.  Fear has left a stain at Hob’s Lane tube station but it isn’t simply a straightforward fear of ghostly projections, demons or devils.  It is a fear of what we really are, the vapidity of our purpose on the planet and the disintegration of all previous suggestions for our role as civilisation.  It is the ultimate fear: that we as a species are pointless without our masters to farm us.

Inevitably, Kneale’s placement of us as a culled race leads to our natural leaning towards fascism.  I’ve questioned this more specifically in an article here but the way hatred is questioned in the film is multifaceted.  Professor Quatermass’ experiments were already on the rocks due to the presence of the military being a draw on the funds and resources.  In many ways, hatred haunts the film as the arrogance that comes with a hatred of outsiders leads to the overall drama.  Colonel Breen (Julian Glover) is the key architect in the destruction of London in the film because of this.  His quiet hatred, his aggressive placement in the world, testifies to Kneale’s overall thesis; that we are driven – when left unchecked of power – by a strain of hatred.  Kneale could be said to make light of this by linking such ideas with the pulp aspect of alien race memories but it still works brilliantly.  It could let us as a violent species off the hook but that would be too easy a criticism, especially for a film that ends with the capital in literal ruins after only a brief moment of this power of hatred gaining corporeality in the physical world.

Essentially, however, Kneale’s argument is poignant one in that it logically suggests that hatred will always be there; that it will fester whenever it is left unchecked.  With a fascist in the White House and all forms of xenophobia on the rise, Quatermass And The Pit has a unique ability to discuss our unchanging political maladies whilst still maintaining enough distance as to not quite fall into a tempting spiral of unhelpful self-pity. 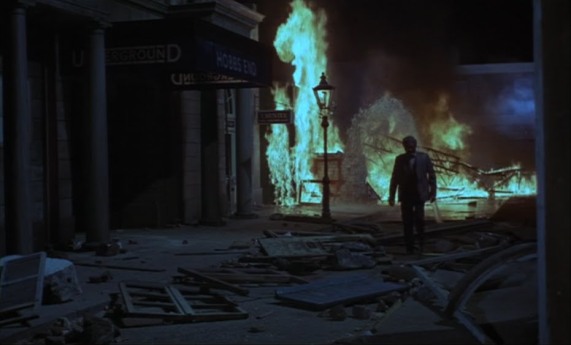