Above is Greenteeth, my film adaptation of the short story by Gary Budden which can be read in his upcoming volume of short stories.  It is currently up for a fantasy award and follows the pressures on a young woman in a struggling part of north London whose social worries begin manifest in more folkloric ways through the legend of Jenny Greenteeth.  The film came about, partly because Gary’s story is being published in his first volume, Hollow Shores by Dead Ink, but also because of a number of walks we’ve been going on throughout the various edgeland territories of London, especially in north London.  Both of us find much purchase in stranger things once embedded and journeying through these landscapes, especially around the canal works which we’ve both explored regularly and variously in recent months.

In the end, rather than choosing the canal-ways around Hackney, I opted to shoot the film around Kensal Green canal instead.  It has all of the requirements of gas towers, graffiti, mounds of rubbish and canal boats, the latter essential as the character of the film lives on such a boat and arguably succumbs to her own mental pressures because of that choice.  Yet, essentially, the film is about the general pressure of London life and its reduction of choice, shot through the lens of a wyrd-edgeland drama; folklore gaining sentience and power through the exhaustion of modern London life.  Kensal Green is doubly appropriate in this sense, especially in the aftermath of Grenfell which happened only a week after the final filming.  Before getting the footage back, I was incredibly worried that I had, by sheer chance, filmed Grenfell’s final days before the fire but was somewhat relieved to find I had filmed the flats opposite from the Circle Line; some elements can be too close to reality.  These flats are, on a side note, the flats seen from the window of Withnail’s flat in Withnail & I (1987).

Lisa, the character of the film, is played by Hayley Wareham, who was perfectly suited to the role from being both politically engaged in the issues of the film and already in the middle of dealing with them in the recent modern stage adaptation of Cathy Come Home, in which she plays Danielle.  Channelling another English realist, the film was arguably cast in the shadow of recent Alan Clarke viewings, especially Christine (1987), which gets a visual homage with Lisa’s constant carrying of a plastic bag.  Other elements in the mix are the obvious Shirley Jackson-isms brought over from Gary’s story; a distinctly feminine paranoia with a refreshing sense of perspectives on the eerie.  Perhaps most enjoyable is the quite accidental sense of Bill Morrison which came about simply because the film stock was entirely out-of-date.  The degradation of the stock has led to some of the images I’m most happy with, especially the fourth wall breaks which, for some reason, came back the most unstable and close to complete destruction; even the film stock couldn’t fully look Lisa in the eye.  Though there was talk of musical collaboration with Leyland (The Caretaker) Kirby with this project, it simply didn’t cross over in time to finalise it.  Hopefully future projects will see such a collaboration but, for now, I worked hard on the soundscape which is a mixture of live sounds and edited effects in the Radiophonic tradition.

Overall, I hope the film is of interest and provides an interesting, and perhaps unnerving, addition to the Halloween proceedings that will undoubtedly be unfolding by the time this is published.  As I collapse under my own workload, I find much solace in the message of my own film which is an incredibly odd feeling.  As Lisa suggests in the voice-over, “There’s one choice in this city: submersion.” 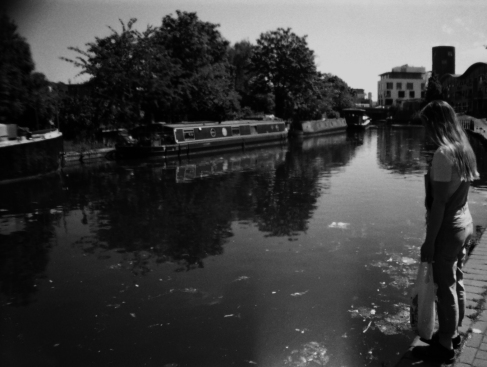 One thought on “Short Film – Greenteeth”