As a companion piece to John Gilling’s other big Hammer success The Plague of Zombies, 1966’s other Cornish based horror is an entirely different film even though shot relatively back to back.  The Reptile focuses far more on the individual effects of a creature on the loose rather than a general view on the chaos, though obviously the villages where both events take place are undoubtedly affected.

The Reptile finds us once again in a land stuck in a time almost backwards when compared to the cities.  An apparent plague (though not of zombies) is taking out people from a rural community and Harry Spalding’s (Ray Barrett) brother is one of the unlucky victims to befall this Black Death.  Harry and his wife Valerie (Jennifer Daniel) have inherited his cottage and move in to find the house a mess and a mystery is to be solved at the heart of this small community in the mansion of Dr. Franklyn (Noel William) and his unusual daughter Anna (Jacqueline Pearce).

The Reptile isn’t as horrific or as exciting as Plague of Zombies but its interests lie elsewhere.  This isn’t a film simply about the gothic horror of the situation presented but is instead an interesting look at the dark and evil nature brought about by the unperturbed paternal love.  The mystery and the goings on to do indeed surround the Franklyn’s but there’s really no doubt that all the action that ensues is down to the Doctor protecting his daughter.

This is a relatively deep and quite modern theme for Hammer, perhaps explaining why the film has aged well, at least thematically.  It’s a story that has found itself in many different hands including the recent vampire films Let the Right One In (2008) and also Let Me In (2010), the latter being a modern Hammer film itself.

Where the film does fall down are its visuals which boast neither the usual attention to colour palette of earlier Hammer or general, strong design work which at times seems very rough around the edges.  The reptile itself is an interesting design but Gilling is right to film it mostly in shadows or partially covered.  With its obvious wonky eye and other telling details, the creature only loses its power to frighten when fully revealed as the house burns in the films finale.  It may also explain why pictures of the creature are often in black and white or at least just a single colour tint as this hides much of the masks short comings and makes it a truly effecting beast. 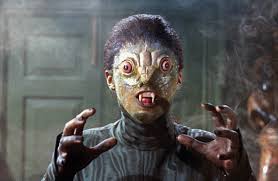 As stated, the finale is a deliciously chaotic scene of burning mansions, creatures and locked doors but there’s something very final about the ending that leaves a few loose ends hanging.  This is further added to by the fact that no attempt is made to save Anna even after letters her pleading the couple for help and Valerie instead decides to save a crying kitten from the flames rather the clearly ill and in need of help Anna.

The Reptile is still an enjoyable horror though and one of the few of Hammer’s canon where it’s actually worth turning the colour down to view it.  Ignoring a handful of faults it’s yet another enjoyable film from one of Hammer’s most productive years. 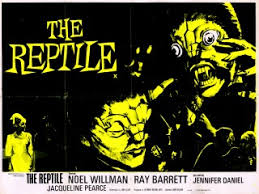