A few years back, whilst on holiday in Norfolk, I began exploring some of locations used for the BBC’s famous M.R. James adaptations, specifically for Lawrence Gordon Clark’s adaptation of A Warning To The Curious (1972).  Though I had been far from thorough in this escapade (I completely missed the film’s most iconic structure in the church at Happisburgh), on finding myself in Suffolk, I thought it best to try and rectify my mistake by walking the genuine “Seaburgh” from James’ story and taking some 35mm photos.  Of course, this meant a wander around the arts-infused town of Aldeburgh on the coast, the town which James maps out in his usual staggering detail as the backdrop for his narrative.

Yet the coastline as a whole is perhaps the most Jamesian of all locales, the country after all being the place of his birth and early childhood (in the small town of Great Livermere on the boarder towards Norfolk near Thetford).  Seeing the opportunity, I thought (like many) to walk the locations of A Warning To The Curious and to see what light it would throw on what is no doubt my favourite of his ghost stories.  Interestingly, the connection was only made at the last minute of the trip; the reason for being down there resulting from a film project in the neighbouring town of Orford of which I am, as yet, not allowed to talk about. 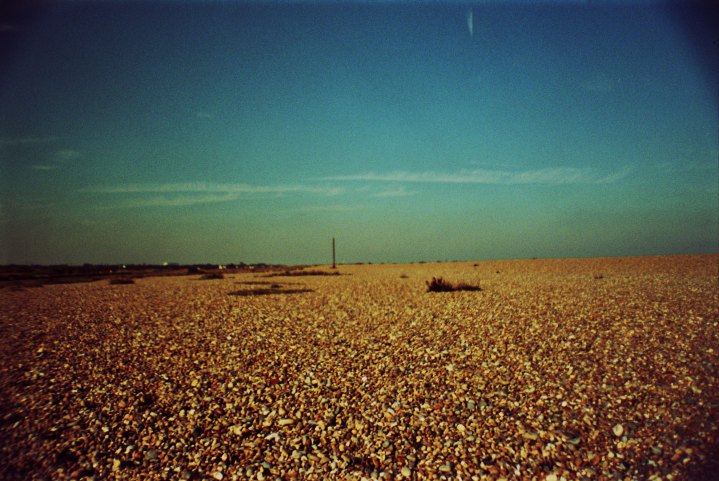 Before filming, a trip to Aldeburgh ensued, and some quick research lead to three very specific locations from the story as well as various other smaller and more indefinite places from both the narrative and from James’ life (most of the locations were checked with this excellent video by the M.R. James podcast, A Podcast To The Curious).  The story, for those unfamiliar, follows the poor figure of Paxton who, on discovering a priceless and unique Saxon crown buried deep under the wooded sands, awakens its ghostly and unforgiving protector in the form of William Ager who seeks far more than just the crown’s return.  Having had the story filtered through my own head in the guise of Clark’s Norfolk locations (especially Holkham which is a place I’m oddly familiar with), it was refreshing to readjust to James’ text and the original location (though my photos have, in terms of colour, tried to be kept within Clark’s original tones for my own personal preference).

A Warning opens thusly with an incredibly detailed description of Aldeburgh/Seaburgh:

“Marshes intersected by dykes to the south, recalling the early chapters of Great Expectations; flat fields to the north, merging into heath; heath, fir woods, and, above all, gorse, inland.  A long sea-front and a street: behind that a spacious church of flint, with a broad, solid western tower and a peal of six bells.”

This middling ground is where our walk started and it instantly opened up questions about why James chose such a location.  The answer could be two-fold.  The first is owing to a deeply ingrained childhood fondness for the place, brought about from trips to visit James’ grandparents who lived in Aldeburgh (one of whom has a plaque in the town’s church). Robert LLoyd Parry also sees this in James’ descriptive enthusiasm for the place suggesting that “The opening lines of the story, in which the narrator describes the fictional Seaburgh through the prism of childhood memory, betrays a deep-seated affection for the real Aldeburgh.” (2012).  Of course, this is typical of James’ work; where absolute detail of place is key in portraying a context of normalness that is to be shattered by the time his varied demons have appeared (see his first story, Canon Alberic’s Scrapbook, for another example of this locus picturae).

James’ descriptions are accurate, having started in the middle where the walker is immediately between the marshy pathways that eventually lead to an RSPB reserve, and the beautiful shingle that the town is famous for.  Having started some way out of the town, it felt right to move towards this marsh and to Sluice Cottage, the supposed home of William Ager.  Behind the cottage and further along is a patch of trees that could be the potential crown site but it is too transitional a landscape to be quite sure.  Ager’s house was, though, a particular delight being eerily empty and distant from even the furthest of the town’s housing as well as being in the shadow of wyrd spherical architecture of Sizewell B Nuclear Power Station. 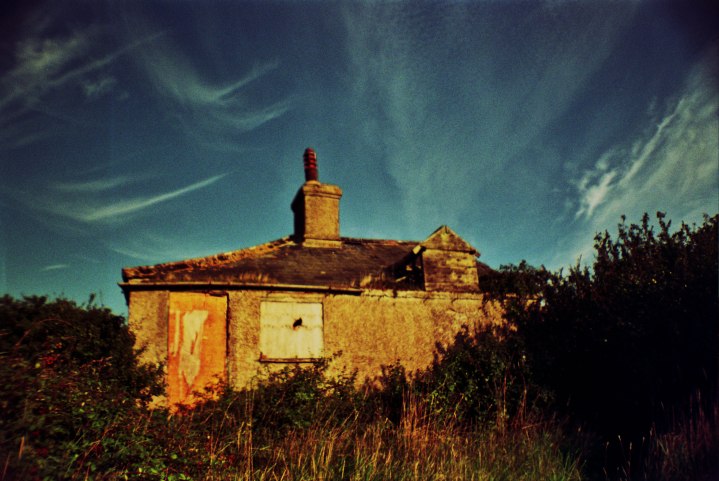 In the story, James has Paxton find out this information third hand from the church rector:

” ‘…these Agers say, or said, that their branch of the family were the guardians of the last crown.  A certain Nathanial Ager was the first one I knew – I was born and brought up quite near here – and he, I believe, camped out at the place during the whole of the war of 1870.  William, his son, did the same, I know, during the South African War.  And young William, his son, who has only died fairly recently, took lodgings at the cottage nearest the spot.’ “

Even though the weather was gloriously warm, the place did have an odd chill to it, a contrast perhaps aided further by the busy nature of the town thanks to the High Tide Theatre Festival that was currently in full swing.  I even managed to attempt my own Ager impression (the digital photo) much to the bemusement, not to say puzzlement of my father.  I’m sure I did the Ager name proud.

On walking into town, we came to The White Lion; famous for its duel James connection acting as both a genuine place where he holidayed throughout his life and a quasi reference point for The Bear in A Warning where all three characters are staying.  The liveliness of the place defied my own willing of it to be barren and mysterious, being far from the visual I associated with it of the small town house in Wells-Next-The-Sea that Clark uses for his film version.  There were men playing bowls outside, young theatre lovers eagerly awaiting a performance outside of the tent situated opposite the hotel as well as the general buzz of an unusually creative town.  It wasn’t until walking far down towards our final stop did the place’s eeriness begin to rise again.

At the opposite end of the town, lies the martello tower.  Famous for being next to the place of Paxton’s tragic demise, this end of town feels similarly to Sluice Cottage; tucked away from the main causeway and oddly at the end of everything.  In the distance, the towers of Cobra Mist, the abandoned airbase at Orford,  could be seen while below, the spots of beach between the sea defences had been worn down quite a way.  In the story, James sets up the tower as follows:

“But just before that, just by the martello tower, you remember there is the old battery, close to the sea.  I believe there are only a few blocks of concrete left now: the rest has been washed away, but at this time there was a lot more, though the place was a ruin.”

This was the location that had really not changed in tone and, aptly, there was even a sculpture on top of the tower evoking a Jamesian silhouetted figure straight out of Whistle And I’ll Come To You.  There was little life around the tower which was also interesting as it is the guard at the tower who saves the other two characters from being suspected of Paxton’s murder.  If we were in the same scenario, we may not have been so lucky…

The trip also allowed for a brief visit to Dunwich, a place with another Jamesian aesthetic connection thanks to Jonathan Miller’s adaption of Whistle.  Dunwich’s transient nature was startling to witness though several small moments that connected with Miller’s version in particular were extremely exciting to the Jamesian geek (the photos below sadly had to be taken digitally).  The first was finding “the last grave” at the priory.  No doubt this was, at the least, the inspiration for Miller’s cliff-top graveyard, most probably filmed in one of the neighbouring fields and partly in studio with some fake graves (or perhaps even in the actual graveyard when it had more than one deceased resident and more land).  The majority of the film was shot at Waxham in Norfolk ironically. The forest next to this was also very clearly the forest which Parkins traverses on his way to the beach though how much of it is so is impossible to tell.  Then of course there was the beach itself, the shingly cliff of which playing various roles in Parkins’ trudge.  I failed to walk to its sandy parts, having already walked some way to Dunwich Heath for Sebaldian reasons but it’s safe to say that the trip, in spite of being for a very specific, non-Jamesian purpose, was still cast in the shadow of the great man and his many eerie confluences. 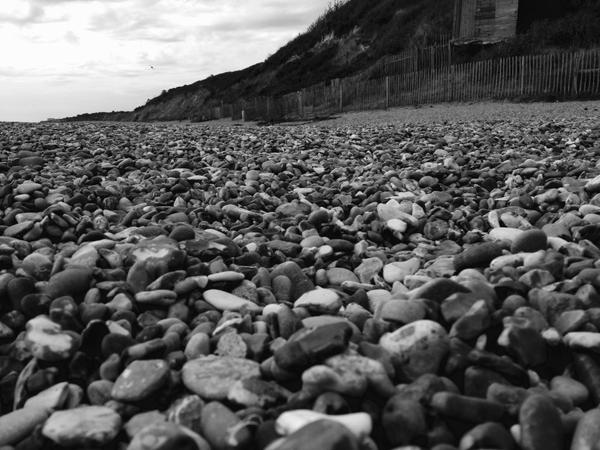 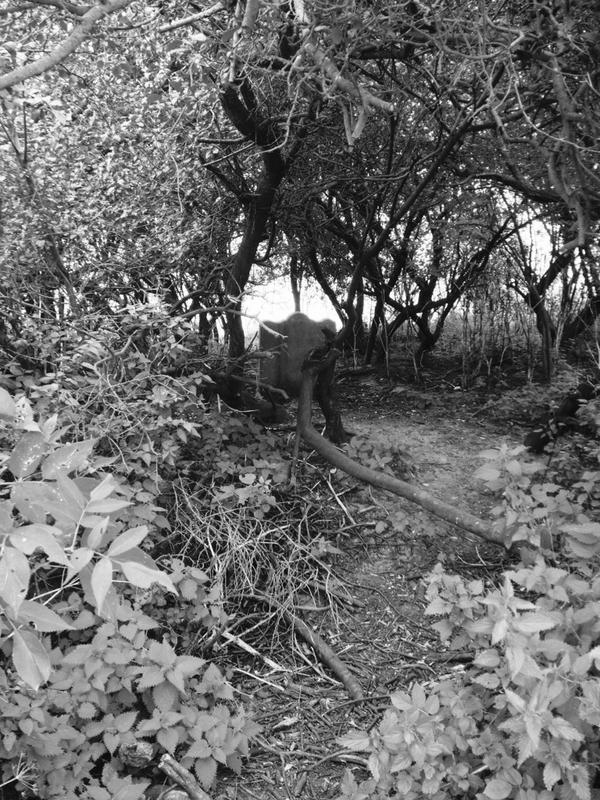 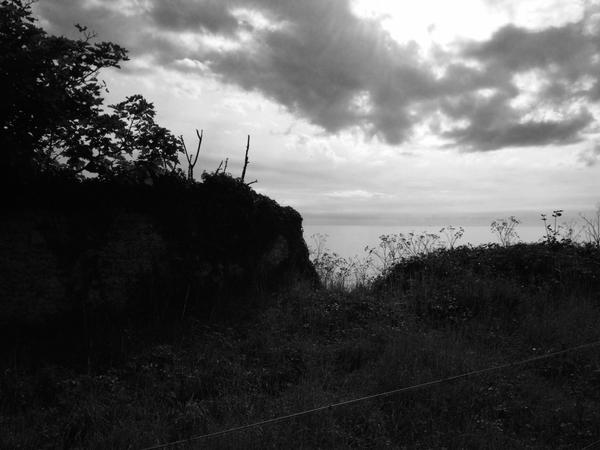