“Whilst homosexuals die, many heterosexuals reach for the remote control and simply turn up the volume.  Does it come in stereo?” (Jarman, 1993, p.138)

The screening of Blue in cinemas during its 1993 release date is its most typical form though screenings were rare and often film festival based rather than through a general distribution.  Unlike the earlier sprouting ideals, the cinema has a set of restrictions and is born about from a tried and tested formalism.  The audience is sat in darkness and almost subjected to whatever the filmmaker intends.  For Jarman, this had often consisted of extremely stylised visuals, highlighting political areas of interest but, for Blue, he opted for an extreme but calm form of final rebellion.  “Jarman’s consistent anti-realism is a mark of his continued refusal of the ready image, the facile realism he believed deceived us.” argues O’Pray and it appears that Blue is indeed the bastion of this ideology (1996, p.203).

As the opening titles of Blue appear on the screen, it could almost be for the screening of a typical film though even then it is clear that a film by this director is not going to completely traditional.  Lawrence describes the film’s opening at the Venice Biennale thus; “Derek Jarman’s Blue did not explode onto the cinematic world in the full glory of Hollywood hype.  When the film was premiered at the Venice Biennale in June 1993, McDonalds’s didn’t organize a special promotion of blue hamburgers, and Coco-Cola stuck to its red-coloured cans and brown-coloured drink.” (1997, p.52).  This was already an art-house based venture even before a single frame of the film is seen by the viewing public.

The credits start to appear, all in blue of course, and they don’t appear to be too different to Jarman’s previous films.  The first tell-tale sign that this isn’t going to be an everyday cinematic experience, aurally and visually, comes in the order of the credits.  The funding bodies of course appear on screen but the space often occupied by producers, directors and actors is used for the composer’s credit.  Simon Fisher-Turner is the first name the viewer sees, ahead of Jarman’s who is credited with being writer and director.  This instantly tells of the relationship about to be viewed and the ratio between creative sound and creative visuals.  For a viewer that had even experienced Blue in its previous forms, their reception in the context of cinematic formalism could not have possibly prepared them for this; to sit in the dark with a blank screen, quite literally listening to a film.  It almost seems odd to even call it a film; certainly it can’t be denoted as a movie in an obtuse sense as nothing visually moves.  Jarman describes it thus:

“It has roots in painting, like Yves Klein and whatever.  It is very much about painting, on the other hand it is a film.  Which is quite interesting because technically speaking it shouldn’t be, it should be some experiment.  It’s not an experiment and it’s not an experimental film of any sort whatsoever.  And for some reason or other actually the best solution for the subject was that there should be no images on it. I can’t imagine it with images on it.” (Jarman, 1994).

Whether the viewers in the cinema will consider their experience a visual one or an audio one will differ greatly compared to their past experience with the avant-garde.  That’s not to say that Blue is rigidly avant-garde but there’s no getting away from its experimental nature even if it is immersed in populist intentions.  When Arnheim argues for film to be discussed as a serious art, the context of Blue makes the arguments stated for the against seem highly ironic: “There are still many educated people who stoutly deny the possibility that film might be art.  They say, in effect: “Film cannot be art, for it does nothing but reproduce reality mechanically.”  Those who defend this point of view are reasoning from the analogy of painting.” (1933, p.279).  Blue comes from a place where reality is created in the mind of the viewer rather than “mechanically” and is also very much from the same painterly ideas. 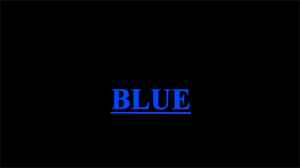 Blue tells of a man’s everyday life as he receives treatment for HIV.  Because of its lack of visuals and narrative built entirely of sound, it allows the viewer to enter into the character’s mind more so than a film that is defined by what is shown on screen.  The viewers hear his opinions on what’s going on around him as well as the sounds of the cafe where he drinks and the hospital where he receives his treatment.  Blue also gives a musical soundtrack to the mind of the character (who is definitely meant to be Jarman as we hear his name called on an airport tannoy system) and while Fisher-Turner’s music plays a largely ambient, nondiegetic role in the film, the distinction is hard to make with no visual stimulus to confirm the diegesis.

This emphasis on sound creates a powerful effect which Chion explains: “But listening, for its part, explores in a field of audition that is given or even imposed on the ear; this aural field is much less limited or confined, its contours uncertain and changing.”  (1990, p.33).  The audio track signals different scenes and chapters by the ringing of a bell.  It becomes increasingly ominous, especially if the viewer is aware of Jarman’s history and of his impending death.  Other musical interludes occur as well, often as satire, addressing the issues of gay rights during the era with some musical numbers meant to evoke the anger of Jarman against the media portrayal of AIDS sufferers as well as an Erik Satie piece which plays aptly while describing a member of the public who “looks like Jean Cocteau.”

For a film with no visuals, there is an awful lot going on so a reading of its more ambiguous parts is essential but the first and most obvious issue to address is its lack of visuals.  When Freud analysed dreams he stated the following:

“If we should seek to trace the relation between the dream-content and the dream-thoughts a little father, we shall do this best by making the dream itself our point of departure, and asking ourselves: What do certain formal characteristics of the dream-presentation signify in relation to the dream-thoughts?” (1952/1980, p.272)

This works perfectly as an analogy to understanding Blue and its reception; the form dictates the film’s meaning and its readings.  This is the main element that makes its reception problematic in that it is debatable whether audiences watch the film or simply listen to it.  For an artist whose main medium was in visual forms such as film, painting and set design, why has Jarman done this?  The earlier presentations of Blue’s characteristics didn’t try to so why is there a lack of visual content?  One argument seems to stem from the director’s increasing blindness.  The film is highly biographical and this seems to be a particularly strong reading behind the lack of visuals.

However, the reading of it simply being a recreation of blindness doesn’t quite add up.  Of course, being in a cinema with nothing to watch is going to be initially uncomfortable, perhaps ultimately so depending on the viewer.  O’Pray states that “It amused him enormously to imagine detractors faced with a film comprising a blank blue screen.  There was little doubt that he was playing with the double meaning of the word “blue” as he was also enthusiastic at the time to make Edward II a “blue” film with explicit sex in almost pantomime rendering of the tragedy.” (1996, p.201).  Whether Jarman wanted to show the horror of his illness by replicating it is feasible but flawed, especially considering the main focus of the poetry recitals in the piece’s previous form being the colour blue and not blindness.  O’Pray’s other, innuendo inspired, explanation also questions the “blindness” argument; was it a beautiful joke on his critics?

Blue does work in some ways to re-create his blindness but this undersells its potential for other readings which are far more complex.  Chion believes that Blue does indeed rely on the function of the screen:

“In another work generally considered radical, Derek Jarman’s Blue (1993), the screen is filled with nothing but blue, an unchanging blue, while we hear the director’s monologue, interspersed with sounds and music.  But here the screen continues to function as an image (that of a blue frame that we observe), and sounds are positioned variously in relation to it.  We can imagine, for example, that the invisible voice of the author sees what we see, since it’s the voice of a character, while the other sounds might be participating in a specific physical universe in common with the blue screen.  In other words, a relation of figure and ground continues to prevail and to divide the sound.” (2003, p.229)

If Jarman’s main aim was simulation of his illness, surely it would have been simpler to blindfold the audience?  Even when the viewers are “watching” Blue, they can still see the silhouettes of the people in front or the safety lights on the stairways.  Even as a piece of film, Blue has several signs that it is not “blind”. Unlike Cousins, O’Pray believes it is metaphorically self-reflexive: “But Jarman is not using the colour field in a modernist way, or at least there are other ways in which it has meaning.  For Jarman, the blue is primarily a metaphor.  It is also a self-reflexive statement about the medium of cinema.”  (1996, p.206).  There are cracks and natural pieces of distortion in the celluloid which oddly mirror the “floaters” that Jarman speaks of later on in the film but overall, if it is a recreation, it is only fleetingly so.  In an effective screening, a sense of pressure and claustrophobia is created.  Flinn argues that “…since utopia stems from our own subjective hopes and fantasies, we have more than mere signs to work with, but the actual desire to materialize them.” (1992, p.157).  The utopia for the audience is the possibility of materializing any reality away from the void and this results in increased attention to the music and sound.

This means that there are more readings for its reliance on sound than simply imitating blindness.  One such view is that it is metaphorical for the apparent “invisibility” of gay men at the time, especially those who were HIV positive as O’Pray believes; “A theme of “seeing” pervades the film.  The “invisibility” of gay men, which has contributed to the number of gay casualties of AIDS, is touched on by Jarman, as is his own refusal of what he calls “the pandemonium of images” in favour of the” universal blue”” (1996, p.202).  This is an issue that seems to be the crux of Blue in its first forms; it is present in Jarman’s writing and in the audio elements of the film.  It is perhaps telling then of how important this issue was to Jarman that he was willing to go against the fundamental principle of cinema in order to achieve it.  This seems more plausible as a means to the method than the “blindness” argument as the viewers will have more than likely some awareness of the issue.  Of course, it wouldn’t have seemed obvious until the lines in the audio presented the idea but it is something far more attainable to than inducing blindness in the viewer.