Not long before I had my VIVA exam for my PhD, I went for a wander around Deptford, making the most of my time in the area since I was rarely there for things besides supervisor meetings. I’ve walked around Deptford quite a bit in spite of this, not least because its market is still one of the best I’ve found in London and which, contrary to the many others I’ve been to, is still filled with tables covered by chaotic bric-a-brac. Deptford Market and the high-street beyond feels very much like the London I wanted to find when I first moved down and so, learning about the area’s connection to playwright and poet, Christopher Marlowe, a venture in search of his commemorative plaque was not to be turned down. 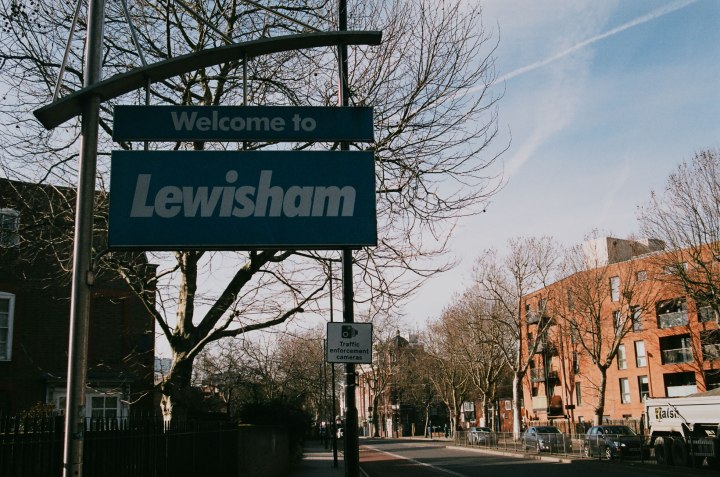 I had heard brief mutterings of Marlowe’s connection to the place before, not least because they were dramatised in the, as yet unread, final novel by Anthony Burgess, A Dead Man In Deptford (1993), which portrays the writer’s role in the spy-circles of Elizabeth I. Marlowe’s death in the depths of Deptford is itself subject to much mystery and debate surrounding it. Though once considered the result of some random brawl, it is now largely accepted that a political meeting connected with the Babington Plot – the plot by Mary, Queen of Scots to kill Elizabeth – resulted in a fight over payment in which Marlowe was stabbed through the eye. It is telling that, in spite of having somewhere tangible to visit today, there is still no specific site or grave where his body rests, just a vague memory of where it possibly lay.

St. Nicholas’ Church, where the man’s death is marked, was not as easy to find as planned. It took several wrong turns around the escalating new builds in the area before it was clear that I was in the right place. The church is incredibly old and, most interestingly, its gates are adorned with three dimensional sculptures of skull and crossbones, said to represent the charnel house that once stood here creaking under the weight of the bones. The church itself is surrounded by relatively new looking buildings so the sight of stone skulls cackling away whilst overlooking the tarmac of the road feels decidedly odd; as if the past is laughing at the present. 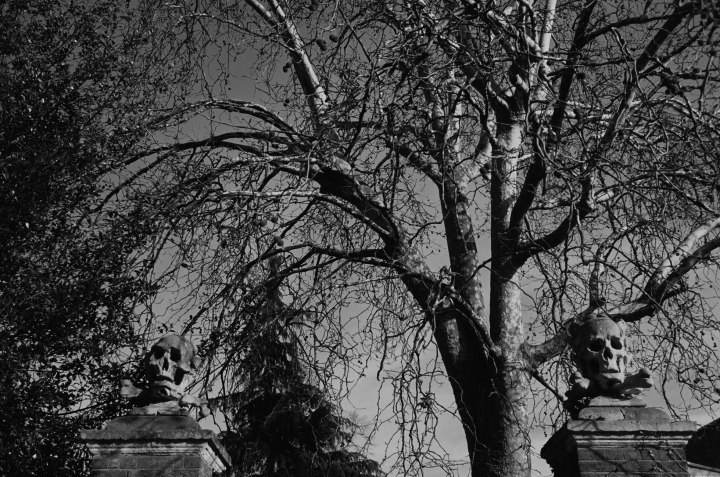 With the churchyard deserted, I followed its wall to the back where Marlowe’s plaque is situated. The plaque has a quote from Doctor Faustus that reads “Cut is the branch that might have grown full straight.” Fearing the worst for my upcoming VIVA, and blessed with a new found sense of superstition, I buried a coin in the soil underneath the plaque as if taking part in some appropriately alchemical offering or pact. Planes were flying over but the greenery of the church and its assortment of songbirds meant it felt surprisingly rural. The few graves there glowed moss-green in the bright sunlight and, though still a very cold day, I spent a great deal of time sat on one of the benches in the churchyard enjoying the peace (similar to my visit to M.R. James’ grave in fact). Occaisionally someone would wander through, the pathway linking two roads otherwise blocked by buildings, but it was a lonely stretch.

I tore myself away from the St. Nicholas’ eventually, heading back to Deptford high-street where I found a coffee shop housed under one of the railway station arches. It was a strange place with an almost constant rumbling caused by the trains above, heightening the impression that this had been a heavily industrial place in years long since passed. Crows were sat in a row on the new flats above and sometimes soared down onto the old brickwork of the bridge before swooping back up to sit on the steel and caw the afternoon away. 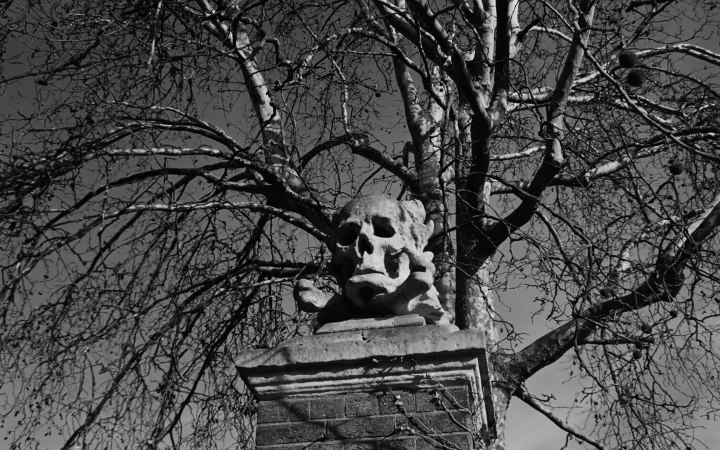 4 thoughts on “Wanders: Marlowe in Deptford”