In 1946, Jorge Luis Borges published the micro-short story, On Exactitude In Science. The piece is a fictionalised fragment, supposedly taken from Viajes de varones prudentes, Libro IV, Cap. XLV, Lérida, (1658) written by the equally fictional Suárez Miranda. The piece addresses the role of perception in cartography, relying on the irony of mapmakers attempting to make a 1:1 scale map of a place; the impression now actually referring back to the original with such precise meaning that it sits like a second skin over the very place it is designed to map. It’s a typical Borgesian impossibility. Yet it was when reading this short that I started to think about cinematic mapping, about the time-image and cinema as a temporal medium as a whole. In other words how certain possibilities deemed impossible in the plastic art of mapmaking, found some guise in the cinematic medium. With this, the first film that instantly sprung to mind was Jacques Rivette’s Le Pont Du Nord (1981).

Rivette’s film follows two women (played by mother/daughter pair, Bulle and Pascale Ogier) as they attempt to solve a mystery that takes them all over Paris. The city is in flux; being gradually redeveloped with buildings crumbling, land being left to grow over and with even central Paris itself being given the feeling of fluctuation. The city becomes a game, quite literally, with the film’s narrative being structured around the Game of the Goose. A map of the city appears throughout, modified to account for this game with some centre being the heart of the mysterious packages of Max (Jean-François Stévenin). Tying the film into Borges is a relatively reasonable proposition considering that the pathways, all leading to some centre, resembles a labyrinth; and with its shifting walls, further ties to some sense of the infinite trapping.

But the film takes on more of Borges’ ideas from On Exactitude in that the mapping of the city, 1:1, feels tangibly possible in the film; the process of filming itself seems to measure place through time. Rivette is one of the directors who I think personally embodies totally Gilles Deleuze’s concept of the time-image and its basis in cinema. Time is no longer subordinate to movement in the images that are captured, and it now becomes directly present rather than merely represented. Yet, with this change in movement-time relations, a sense of space can also be mapped in some way, even with the cuts typical of film (albeit in a lesser form as is typical in Rivette’s cinema) cutting off the total accuracy of the cinematic cartography. When Rivette films Pascale Ogier riding her moped repeatedly around a roundabout adorned with lions (around Le Triomphe De La République in particular) the space is mapped by the literal time it takes to explore it. In fact, the two are interconnected with one explicitly leading to the other. 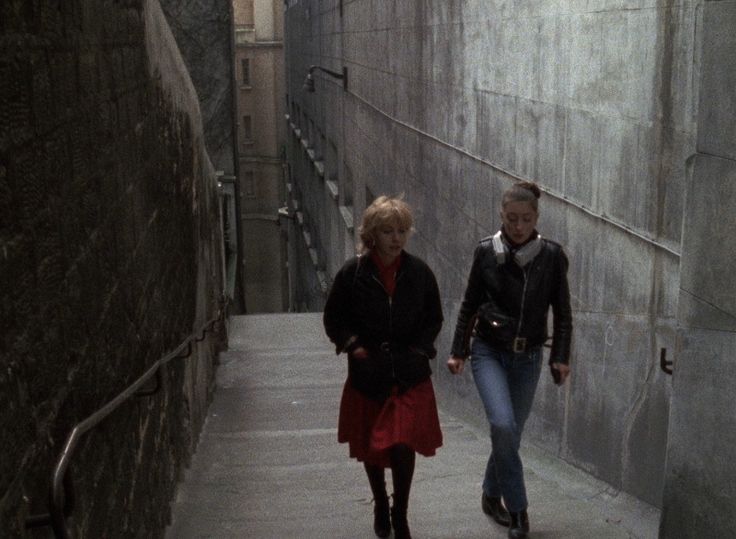 What then is the connection to Borges? If the gap can be reduced between the plastic art and the temporal art (or it can at least be accounted for) then the 1:1 mapping that Borges used with a sense of impossibility finds some feeling of tangibility, as far as tangibility can go within a temporal medium. Rivette maps the streets very often in real-time, or as close to real-time as is possible before cutting between segments. It’s not an exact or perfect fit (he still cuts even within segments), but the drive is there, as is the potential to extend it. We forget sometimes, when looking at maps, that they are a measure of time as much as they are of space. That the lines represent – even if not exact with certain maps augmenting the space for a neat and logical representation (the Metro or Tube maps for example) – equally some as yet unmeasured time that exploring them physically would take (and perhaps did take depending on how early the map is). It’s a palpable element in Rivette’s film.

When the characters are examining the maps, in particular when comparing a variety of maps that they have comes across – using one to decode the meaning of the other – I thought of what Borges said in his short story. “In time, those Unconscionable Maps no longer satisfied, and the Cartographers Guilds struck a Map of the Empire whose size was that of the Empire, and which coincided point for point with it” wrote Borges. I can’t quite make the link to what this says about Rivette’s scenes in question, when really the maps were arguably unfathomable in the film, at least for the viewer. Yet the best way to describe it is that these smaller maps heighten the sense of place in the film, that Paris was tangibly constructed even if still in the process of changing and shifting. In other words, the two characters were themselves in a map of sorts created by their own movements; where certain roads and places were mapped in the scale of 1:1, drawn with the cartographic randomness that can only be achieved via physically wandering and drifting through streets and through time.