I first encountered the work of Tessa Farmer during a rainy daydream in Saatchi Gallery a few years back.  It was a strange experience as, staring at her Swarm (2004) piece, it took a while to pinpoint exactly what was unnerving about the work.  The discovery of a micro-agency controlling the taxidermic happenings in the form of Arthur Machen-like faeries is key to the enjoyment of her work and is especially pleasing when considering that Farmer herself is the great granddaughter of Machen himself.  The detail can be breathtaking and a literal excursion into a secret underworld filled with malevolence and macabre beauty.  Hearing that some of her work was the mainstay at a new exhibition at Griffin Gallery, I headed off north of the river to Latimer Road to once again delve under the furrows and into the land of dark spirits and the reincarnation of visceral entomology.

When entering the gallery, Farmer’s work instantly jumps out with it being adjacent to the entrance.  Unusually for her work, there is no glass containment but instead a full installation with her usual creatures and faeries involved in some dramatic interplay.  Farmer’s work here is part of the “Perfectionism” exhibition, this part being known under the title of The Alchemy of Making.  I was intrigued as to how this piece, named La Chasse (2016) – which is French for The Chase – engaged with the themes of process found in the rest of the exhibition (along with a second piece by Farmer).  I asked gallery member and artist, Mathew Gibson, for his take and he suggested that the mixture of the real – the dead animals and insects that made up the bulk of the display – and the unreal – the miniature faeries controlling the action – created some sort of questioning regarding process.  I like this idea, for La Chasse‘s affect is arguably brokered by this blurring of the diegesis of the work.  There is an obvious narrative to the piece which shows multiple events happening in stasis – the flying of strange contraptions built from dead animals, the attacking of a blackbird by controlled ants and many other forms of captured kinetic action – but the process in the piece comes from the very aligning of these two worlds.  Effectively, Farmer’s presence is more through the faeries than the taxidermy, their addition highlighting a process both within the diorama and the viewing experience, even if the piece is effectively physically finished as it stands.

The way that La Chasse captures the rhythm and movement of a natural swarming is staggering.  Though often a regular occurrence in her work with many busy acts of violence taking place, La Chasse feels at the heart of a swarming that’s easy to relate to having witnessed such an occurrence when I was younger.  The piece took me back to a trip to an island on The Wirral peninsula, called Hillbre Island, with my father.  We had gone to see some sort of a wildlife, most likely a bird.  The day was incredibly hot but my memory is dominated by the highly unusual occasion of a swarming of ladybirds.  It is not an exaggeration to say that the stony outcrop of the island was turned into a seething mass of living red as thousands upon thousands of ladybirds clustered, the air turned into a flickerbook of red flashes.  I remember their surprisingly sharp, constant bites as we tried to make our way around the island, flittering around our faces and eyes with a chaotic but strangely reasoned intent.  Perhaps if we had looked closer, we may have been able to observe the presence of “little people” driving them here, herding them into a formation of attack.

Farmer’s piece reminded me of this day distinctly; the movement of the many different insects both fighting off further attack and being used by the faeries to aid their cause.  A light breeze wafted in from another viewer coming into the gallery doors, moving the models gently and slightly on their fishing line hanging.  A brief moment of movement gave rise to a strange poignancy as the dead found a slight respite from their stasis of constant turmoil to become simply objects once again before returning to the affray.  Leaving the gallery and the work behind, the day gave way again to a familiar grey gloom of the business park where the gallery resides.  Rather aptly, something flew into my eye as I was about to cross the road heading towards Ladbroke Grove.  It was as if La Chasse was ready to follow, out of the gallery and swarm into the street.  As Machen himself suggests “we must expect to encounter strange adventures, strange perils.”

Chasing through the air on dead invertebrate,

Hastening its locking of the ant’s antennae.

Dressage for the rotting dead and their feasting,

A battle-ground cadaver for an unseen war.

The dusty scales of Lepidoptera,

And the broken spines of the porcupine,

Turned to shield and sword,

Stabbing at the writhing, the life clawing on.

Chirruping turns to a death cry,

For a blackbird, eaten alive by ants and worse,

Its feathers toiling over air, plucked out one-by-one,

Downy barbs torn as it downs into barbed thorns;

The little people have won. 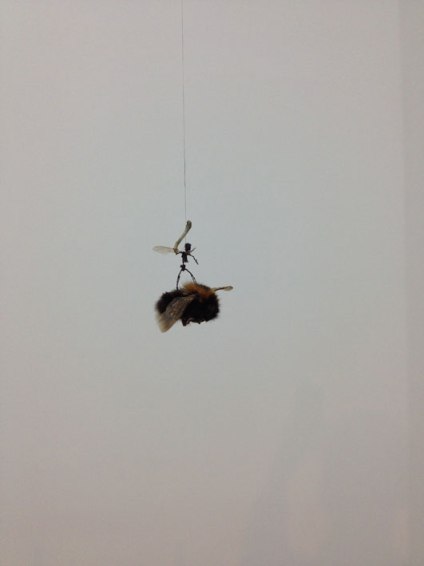 Perfectionism (part III): The Alchemy of Making is on at Griffin Gallery until the 18th of November.