I have been lucky enough to have this year’s Halloween film, No Diggin’ Here – a film about M.R. James, Aldeburgh and A Warning To The Curious – premiered on the BFI’s website.  It was a Halloween treat that, until I saw it happen in full, I didn’t quite believe, but I count myself incredibly lucky for such an opportunity.  A few weeks back, the film was shown at the Folk Horror Revival’s wonderful event at the British Museum too and so, in spite of being a grainy little film about landscape and ghosts, it has probably been the most abnormally widely received film I’ve made so far.  This is actually over the backdrop of a number of months that have seen nothing but rejections from short film nights, competitions and the like; events that, judging by seeing the films that have done well, there’s little point in even bothering to further explore.

No Diggin’ Here explores the landscape disparity between the original Suffolk locations of James’ story and the subsequent Norfolk landscape of Lawrence Gordon Clark’s 1972 adaptation it for the BBC; the latter manifesting in the descriptive narrative of the film’s voiceover, the former taking up the visual of a surprisingly sunny day in Aldeburgh.  The age of stock, which is well passed its sell-by-date, creates the sort of misty, spooky murk of James’ original story and moody Seaburgh – his shadow formulation of Aldeburgh.  Essentially though, I wanted to show how strange Clark’s narrative take really is when transplanted back onto the original landscape.  Such is the linearity of Aldeburgh in the context of James’ locations that it can be quite a shock when trying to find the equivalents used in the film version, a journey which I undertook a few years back.  The BFI article was also a great way to finally get the photos I’d taken of the locations out there, which had been languishing on a hard drive for some time.

Most excitingly of all is to get work with one my of my favourite current musicians, Laura Cannell.  She has recreated the atmosphere evoked in the music of Clark’s film, the motifs and melodies bearing shadowy resemblances to the Maderna and Ligeti music used but also further cemented in Cannell’s own channelling of East Anglia.  The region has no better creative conveyance than in her music.  This is hopefully the first of a number of collaborations which will be explored further in 2017.  For now though, happy Halloween, and remember, the lost crown of Anglia is well guarded. Monitum. 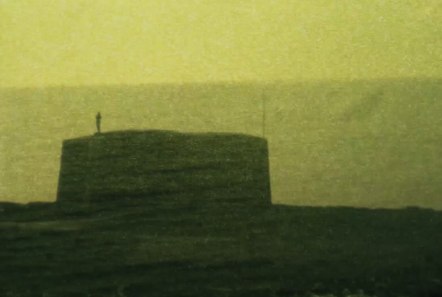