One of M.R. James’ most recognisable writing traits is his emphasis on rural settings.  From his own personal experience, of both exploring the churches of France on holiday bike-rides and living and holidaying in Suffolk and Norfolk, the rural landscape became almost as much of a story trope as the fusty, antiquarian scholars that inhabited them.  James builds up the landscapes of his various stories using recurring techniques; highlighting their beauty but only in order to distract from the fact that they actually explicitly isolate their main protagonists from general society.

Both directors that tackled James in the visual form took this aspect and heightened it, often for the visual difference that location filming could add to television; this was in an era where studio-based recording was often the norm and location filming was an expensive luxury for smaller budget productions.  Being granted this luxury, however, meant that each film could attain a visual and an aural quality far higher than the more typical studio-based dramas.   When reinterpreting this aspect for television, there was clear scope for aural innovation.  This did not just mean simply creating a realistic or even atmospheric backdrop to the drama of the stories but meant actually showing the potential to add and develop extra layers to already innovative rewrites of the original stories.  This section aims to show how these natural soundscapes were built up but, more importantly, how they create a sense of potential for a supernatural occurrence by recreating the original stories’ distinct sense of isolation and landscape.

The Natural Sounds Of Whistle And I’ll Come To You.

“Quickly as it had risen, the wind did not fall at once.  On it went, moaning and rushing past the house, at times rising to a cry so desolate that, as Parkins disinterestedly said, it might have made fanciful people feel quite uncomfortable; even the unimaginative, he thought after a quarter of an hour, might be happier without it.” – James (p.133, 1931).

In many forms of horror in new media, nondiegetic music is essential in creating the genre’s most desired effect; that of scaring the audience.  It is rare to encounter a film in the genre that doesn’t, in some way, rely on a musical gesture to emphasise its, often fear-inducing, points.  Miller’s Whistle And I’ll Come To You, in spite of being very earnestly an attempt to terrify the viewer, does not have any nondiegetic score or even diegetic music.  The film at first seems aurally sparse, especially in comparison to later James adaptations which do use nondiegetic music to convey a sense of dread due to the presence of a malevolent ghost.

In Miller’s film, the aural world is one subtly but firmly rooted in the natural landscape that surrounds the main character.  This is a direct link to James’ original story though Miller’s adaptation removes its more social aspects in order to symbolically isolate its main character, Professor Parkins[i].  This isolation is an essential element in finding and creating a reading of the psychology of the film’s landscape and soundscape but also a reason why some James purists disliked the work as Oliver suggests: “The Jonathan Miller version is one of the finest ghost story adaptations ever created.  Accusations by purists have been made against it on the grounds that it is too ‘psychological’, but Miller is only accentuating strands that are there in James’ narrative, albeit in muted form.” (p.8, 2012).  Parkins is in the resort to go on holiday, getting away from the toil of academic work.

The place of his holiday is a grey and decrepit sea-side resort, of which the viewer is only shown a train station and a hotel as hints of civilisation.  The rest of the film is explicitly set in the surrounding rural area, with particular emphasis on the sand-dunes of the nearby beach and the cliff-top paths where Parkins discovers the ominous whistle of the story’s title.  Fisher reads into this an academic potential as well as an aesthetically aural realisation, stating:

“The contrast between the urban world which Parkins has left behind and the empty heathland over which he wanders is also a contrast between enlightenment knowledge and ancient lore, and Parkins’ estrangement consists, in large part, in his finding the modes of scholarly explanation which work so well in university libraries suddenly having no purchase on what he encounters in the Suffolk landscape.” (p.1, 2012).

Because of this emphasis, Miller’s soundscape (created by sound editors, Ron Hooper and John Ramsey) is filled with an aural interpretation of a wild place immune to this “enlightenment knowledge”.  Some of it is clearly recorded on location, obviously in some cases because the sound requires Parkins’ voice to be heard naturally mixed within the rural audio, but other moments seem more earnestly odd and uncanny.  After the film’s opening nondiegetic monologue, the title credits appear.  Rigby discusses these opening titles and its nondiegetic voiceover as a foreshadowing of the mental disintegration of the character and a sly misdirection of Miller’s adaptation, with its move towards more psychological and psychogeographical elements:

“Concocted by Jonathan Miller (a product, like James, of Cambridge University), the laconically titled Whistle and I’ll Come To You (1968) opens with a no nonsense announcement that ‘This is a tale of the supernatural’.  Yet it quickly reveals itself to be nothing of the sort; instead it’s a study of a disintegrating academic mind, and functions as a disguised satire of MR James himself.” (p.1, 2012).

The titles are stark and minimal, relating only the film’s name and its leading performer, Michael Hordern.  The voiceover, which is also used in a similar fashion in one of Clark’s adaptations, also recalls a logical ideal of Kozloff’s:

“…voice-over narration recreates first experiences of narrative: being told a story, or being read aloud to.  Not only does this technique hark back to the childhood of narrative art, it refers back to our own childhoods as well.  The voice turns the moviegoing experience into Storytime.” (p.129, 1988).

This again refers back to the literary tradition of the stories; that of the fireside story-telling tradition and recitation.  The television is clearly just an extension of this practice, building on a desire for childlike fear.  However, these titles have no mood-setting music but are instead accompanied by the sound of wind.  The wind is nonspecific and not tied to other potential soundscapes (the previous visual of a man walking along an empty beach already had a specific aural beachscape) and so can only be construed as having some thematic tie to the story itself.  As the story is about a musical instrument that requires the passing of air to create its music, wind has a very clear link to the narrative.

Its sound does not strictly represent a haunting but instead acts as a precursor to it by isolating the character, almost urging him on to blow into the whistle and summon the demon.  Parkins is presented as a solitary figure and the film’s visuals are defined by his image against a backdrop of the previously mentioned rural areas.  It is only when this sense of loneliness is broken that the film begins to present the viewer with a haunting.  Up until this point, Parkins is shown to be isolated through an absence of man-made sound (with the only sound being that of him talking to himself and his interaction with the environment which is discussed in the next section).  Interestingly, Fisher attributes this with the description of “ambient music” as if the absence aptly but ironically signifies the presence of something else : “With his lingering concentration on the East Anglian landscape, and its brooding silences, it was as if Miller invented something like the television equivalent of ambient music.” (p.2, 2012).

By having the opening (and the closing) titles soundtracked by such an aural ambience, the film is confidently suggesting that what happens to Parkins is due to his isolation.  This is not only a theme of several of the other BBC Ghost Stories but a theme of James’ work as a whole.  With Parkins, like so many of James’ protagonists, being a solitary academic male, the isolating rural soundscape is the perfect symbol of his character’s encroaching mental disintegration (i.e. the haunting) as well as an audio-visual layer for the film’s setting.

The wind later torments Parkins when he is back at his hotel, as if bringing the whistle he has found has also brought the harsher weather of the coastline.  Fisher suggests that “At one level, the empty dunes and solitary heathland become an objective correlation for Parkins’ increasingly solipsistic mental state.  But the beach is also the zone where Parkins encounters the outside, the alien forces that fatally disrupt his interiority.” (p.3, 2012).  Aurally, Miller reflects this disruption by showing the soundscape of outside to be ubiquitous, almost following the character in the same way that a ghost would to areas where he should, at least by his own logic, be safe (in doors).  It is at this point where the role of the rural soundscape begins to change and instead becomes one of a number of signifiers of something otherworldly and odd.

The wind isn’t simply an abstract idea now but is haunting the character in the most typical of Jamesian fashions[ii].  The sound is alerting him that his own academic arrogance and dismissal has brought about something that is going to completely misshape his own comprehension.  There is a strong parallel perceivable where, as the sound level and intensity of the wind increases, Parkins’ own blasé attitude towards ghosts and the supernatural diminishes, to the point where he actually decides to stay in his hotel and read a book about the subject rather than venture out again into rural wild. 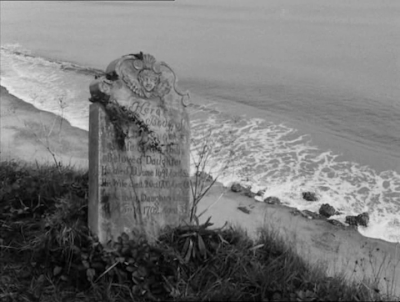 It is fitting then that, with Parkins’ final change in belief that the film cuts to the credits, again sound-tracked by wind.  Parkins’ final encounter with the ghostly phenomena seems to push him over the edge, his hair literally standing up as he vehemently tries to convince himself that he hasn’t just seen the sheets of the other bed form into a being.  As he utters a final “no…”, his crumbling denial as to the existence of the supernatural, the wind is the last thing that the viewer hears.  It perhaps represents a final, symbolic evolution of Parkins himself as well as the evolution of the sound as whole.  For, when the sound of the wind opened the film, Parkins was seen moments before, strolling confidently along the beach.  By the end, Parkins has been violently questioned on his own beliefs, his academic isolation shown to have come full circle by the sound of the wind; now an ominous warning for those who dare to be isolated by it.

[i]In James’ original story, Parkins is quite specifically in the rural resort for a golfing holiday.  In Miller’s film, Parkins is there simply to go for walks or “a good trudge” as he states and seems ambivalent to sharing company with his fellow hoteliers outside of one character.

[ii] In his journey, the sound of the wind changed depending on whether he was by the reeds of the dunes, the forest of the graveyard or simply the empty beach.

4 thoughts on “The Aural Aesthetics of Ghosts in BBC Ghost Stories – Part 5 (Landscape).”