The narrative ambiguity of Berberian begins to kick in during the last quarter of the film.  The sound within the narrative gradually eases over the line and starts to become part of the narrative affecting a number of the characters and not simply Gilderoy.  The first hint that the sound is entering reality comes when the previously abused actress is recording her screaming.  The film has presented a number of recording sessions, some humorous, others more disturbing.  This element of disturbia comes from the sound within the narrative context of the Giallo, moving explicitly into commenting on the sound of Berberian; effectively becoming the narrative itself.

As the actress screams, this isn’t simply an aesthetic scream for the recording but an angry cry out at the situation within the studio.  Strickland tells this visually by showing the sound booth gradually disappearing into isolation as it zooms away into a black abyss.  This simply would not have been possible if the sound relationship had stayed solely within the diegesis of the characters (or even in an absurd sense a double dose diegetic/diegetic).

Where the sound really begins to take control is in Gilderoy’s paranoid breakdown when he believes someone is in his room.  Before this, the sound has increasingly become more and more like the sound of the Giallo.  This breakdown is what results in the film shifting focus, changing the language of Gilderoy to Italian and the total immersion of Gilderoy’s world with the world of the film he is working on.

While trying to find the intruder, he stumbles upon a film of his life that is staggered by a few minutes.  He rewatches his actions which are also now dubbed into Italian; his life is now becoming a film of its own which breaks down into celluloid and sound effect blips before burning out completely and turning into the film Gilderoy previously worked on; a gentle and nostalgic public information film about the countryside.  The music and sounds he brought with him have now dictated an entire reality to collapse: perhaps through a desire to “escape” the studio world, perhaps through an increasing sense of nostalgia for the natural calm of Box Hill.

This nostalgia is of course rose-tinted, happy in the unquestioning Vaughan Williams world of the last film.  This is also seen as a reaction to the news of the chicks in the garden back home being needlessly killed in a letter from his mother.  It could be equated that the news allowed the sound worlds created by Gilderoy to completely overlap with his current reality which, under the strain of the nostalgic desire, completely collapsed and disintegrated.

This new world becomes contained within the letter which explains the collapse, though Gilderoy never recovers from it.  He is later found in the same scenario as he was earlier in the film.  Earlier scenes are repeated but dubbed into Italian.  Like taking the grape from Santini, taking the melon from the suspicious sound roadie implies the ultimate in cooperation.  The tragedy and guilt haunts him in snippets of the abused actress screaming.  However there is no longer any sound.  Her scream has been silenced by Gilderoy’s acceptance.  He simply wants to escape. 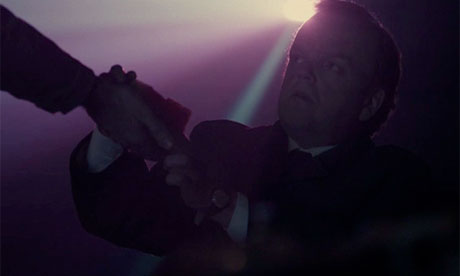 When sound is put back into its place within the narrative context of Berberian, it is only used to torture the replacement actress due to the producer’s impatience.  He wants Gilderoy to make her cry but is in torment with himself over doing it.  Instead he does the only thing left open to him which is to use sound to affect the actress.  The line has been overstepped; the sound is now affecting the characters in Berberian and not simply highlighting the actions of the fictional film.  Diegesis is being explicitly used to mismatch the two worlds presented and in doing so, Berberian breaks down its central character and his ideals more so than any film about torture or violence could possibly achieve.

It is not unusual for modern films to embrace a questioning stance through sound, though it is rare to find one that does so as earnestly and effectively as Berberian Sound Studio.  While paying an obvious homage to a popular era of cult film, it has also shown the viewer the power of sound in a beautifully metaphysical way.  When Gilderoy fades away at the end of the film, it is completely fitting for him to disappear to white noise being literally cut off.

The role of the projectionist seems to have been paramount in the film, the click suggesting that this character has had more say than is perhaps given credit for.  However, Gilderoy is ultimately the main cause of the film’s avant-garde approach to sound.  Not only has he created the ideas that lend equally to the Santini’s film but he has also has plotted his own mental escape leading the film’s most interesting and stunning audible breakdowns.

The film avoids pandering to a simple cliché and instead presents a labyrinth of ideas that all carry equal merit within readings.  It could be very easy to get lost but even with all of this experimentation with sound, there is still always a linear narrative path to follow if the questioning simply gets too much, even if it does lead to final revelation that reality is dependent on far more than the visual stimulus around us.

One thought on “Berberian Sound Studio – Part 3 (Sound as Narrative and Conclusions).”