One of my favourite moments from Alfred Hitchcock’s Psycho (1960) is not a typical choice considering the film’s many infamous scenes. Rather than showers, murders and other more memorable images, I particularly love a relatively bland scene later on in the film. It has narrative development in its eerie punch line but has little else on screen in terms of Hitchcock generally: it is perfunctory really in comparison to most other things in the film. But the scene captures something I’ve found in a range of horror media that is difficult to describe; a pleasurable sense of distance from a place of horror already mentioned. Whether this be distance in terms of the characters and the space they inhabit at that moment, or in the viewer’s sharing in that warmth away from some place where horror is seeping out into everyday life, this distance is something I cherish when I eventually come across it.

The scene in Psycho is late on into the story when the narrative is now following Lila Crane (Vera Miles) and Sam Loomis (John Gavin) as they go in search of the missing Marion (Janet Leigh). Marion was on the run after stealing a great deal of money but made the unwise move to spend a night in the Bates Motel where she is murdered by the schizophrenic, Norman Bates (Anthony Perkins). In the scene, Lila and Sam are in the house of the local Sheriff Chambers (John McIntire) after paying an unsuccessful visit to the Bates Motel where Norman was unhelpful. The punch line is that, having seen a figure of Norman’s mother in the window of the house overlooking the hotel and Norman having spoken as if his mother was alive, the Sheriff suggests that Norman’s mother has in fact been dead for some time. “Well, if the woman up there is Mrs. Bates… who’s that woman buried out in Greenlawn Cemetery?” he asks.

At this moment, I am glad to be in the Sheriff’s house. The viewer has some pathos as to what is going on though not the full picture of Norman’s illness just yet. Either way, there is a distance, thematic and aesthetic, between the two spaces. The Gothic horror that is growing in the motel and mansion is very deliberately mentioned whilst in this small-town, cosy space with a figure of authority there with us. The moment is eerie but it is a pleasurable distance, a sense of far away that, though we know we will be lost (in a mere moment in fact), is to be savoured. It heightens the feeling of leaving safety and comfort once more but this in turn heightens the tension of returning back to discover the gruesome reality of the Bates Motel and its morbid history.

I often think of the ghost stories of M.R. James working in a similar way though not quite the same manner. On a podcast a few years back, one of the points I raised in regards to why James’ readings of his ghost stories at Christmas worked so well was because of a contrast. This contrast, in his strongest stories to me, often involved a wintery, desolate landscape in which spectres and the unnameable were coming to seek violent retribution upon the curious. From a warm, Cambridge fireside to an empty Norfolk beach in winter, the sense of distance is the same. I am grateful to the teller, always James as a singular voice to my eyes and ear when reading, that he conjures these images when we are at a pleasing enough distance to enjoy them. They are gifted a quality that implies the reader is some way away where such horrors occurred or, worse, are occurring in that moment. A Warning To The Curious does this especially well though equally, I imagine the feeling being similar when watching any number of BBC adaptations of his work.

I think of the moment in Jonathan Miller’s Whistle And I’ll Come To You (1968) where the image of the protagonist, Parkins (Michael Hordern), is over-layered with the beach where he found the whistle. It is not a pleasant realisation for the character as the landscape and its menaces are returning slowly towards the indoors. For the viewer, we are given a brief moment of distance and feel the cosiness of the hotel; glad to not be out there in the cold, Norfolk night.

Perhaps the most alarming and effective example I have encountered of this feeling is in H.P. Lovecraft, and, even more specifically, in the story The Case Of Charles Dexter Ward. In Lovecraft’s stories, this distance is part of the general mechanism for his menaces as the creatures at the centre of his stories are often beyond language or are at least supposed to be so horrific as to be impossible to fully convey. In his case, he relies on testimony from characters within his stories as to the horrors going on elsewhere, cries in the distance of unspeakable terror befalling some poor soul rather than showing what is happening. In The Case Of Charles Dexter Ward, I have never felt such an acute sense of pleasurable distance, though it was, on first reading, to the point where it was unnerving enough to almost slide from pleasure into a case of genuine anxiety. In one segment, characters in a cottage have recounted what is happening on a coastline near the farm where the intrigue of the story swirls like sulphur vapours. Some sailors and military are sent to investigate (and end up fending off) something. The reader is never taken with the sailors on their errand and is not witness to what happens to them. Instead Lovecraft gives us evidence of people either returned from whatever it was that happened or people in a nearby cottage who heard and glimpsed fragments of what was going on (there are several distances are here). 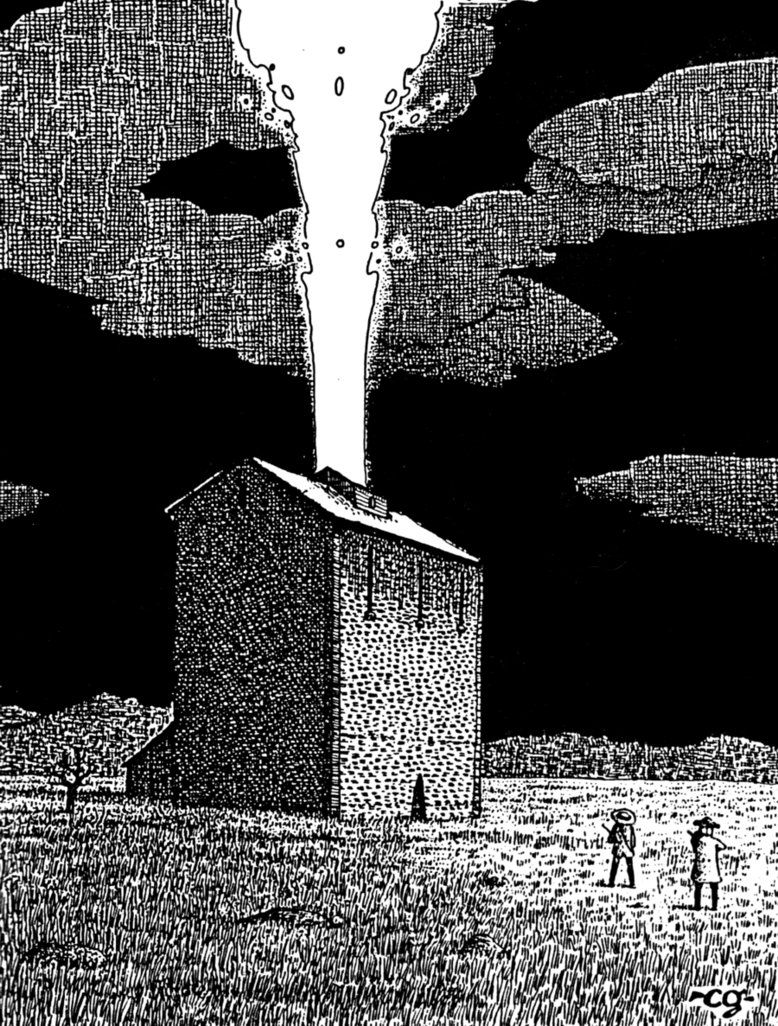 Lovecraft writes that “It was just before dawn that a single, haggard messenger carried a conviction which his mere words could never have conveyed: for though he was a seaman well known to many of them, there was something obscurely lost or gained in his soul, which set him for evermore apart.” He then describes the scenario that put him this way through “muffled” sounds before screams from the actual farm itself are heard and followed then swiftly by silence. All of this is second hand, implied, judged or related. It is never in the moment just like how finding out about Norman’s mother gains a greater effect when placed away from the murky horror quickly becoming apparent at the Bates Motel, or in how much more pleasing it is to learn of cursed Saxon crowns when sat by a Cambridge fireside. “A wailing distinctly different from the scream now burst out…” wrote Lovecraft in his unnerving short story. My first and still consistent reaction to this is: what a pleasure it is that it is related from afar.

One thought on “Horror’s Pleasure of Distance”