I was sat on a couch in Strasbourg reading essays by Teju Cole, the volume Known And Strange Things published quite recently by Faber and Faber. It was night and I was alone, glancing up occasionally, as I often do when in my partner’s flat, to stare at the city’s famous cathedral lit up at night. I was at the point of the book when Cole begins to explore the work of W.G. Sebald – a major influence upon his own writing – when something stuck out. The essay, titled Poetry Of The Disregarded and published in the New Yorker a few years previous, was about Sebald’s often neglected poetry, an essay marking the publication of the selected works Across The Land And The Water. Cole had quoted part of a poem included in the volume, from a long, meandering text appropriately titled, Remembered Triptych of a Journey from Brussels. Taking the words totally out of context to make the point that Sebald’s poems can be almost baffling in their allusions, the quoted segment was as follows:

“Strasbourg Cathedral
bien éclairée.—Between thresholds
lines from Gregorius, the guote sündaere,
from Au near Freiburg, rechtsrheinisch,
not visible from Colmar—Haut Rhin.
Early morning in Basel, printed on
hand-made Rhine-washed lumpy paper
under the supervision of Erasmus of Rotterdam”

I remember looking up from this poem and staring at the very cathedral it had just mentioned, noting also that, due to the current flight routes, I had followed the journey itself mere days before; travelling from Basel through Colmar to get to the city due to direct flights being available only in the warmer months. Sebald’s work has always had an uncanny aspect when read, not least because he has the ability to draw upon things that, though seemingly inconsequential, gain meaning at the strangest of times and on a deeply personal level. I used to call this the writer’s Phantom Coincidence because, unlike most other writers I have come across, he seems to have laid subtle hints, especially in regards to places and buildings, that always eventually manage to find their way underneath my own footsteps in reality. What Cole rightly labels as Sebald’s “opacity” is really an element that is always in some stage of process rather than a forever hidden enigma.

This sense of Phantom Coincidence has happened to me before with Sebald’s writing; finding something uncanny in certain elements of The Rings Of Saturn especially where I only later found out that several places – of which are visited in the book and which lingered in my thoughts after first reading – were visited in childhood and held similar aspects to what the writer described. Vague memories of getting lost on Dunwich Heath in particular come to mind. But there was something else that came with reading this fragment of poem, not least the coincidence that Cole had chosen this specific part. It’s rendered even more odd considering that the line he begins his quote on doesn’t even start with mentioning the cathedral but with “Banhof von Metz,” and a further four lines detailing earlier parts of the trip before this segment of the stanza.

Cole picks up on the shift of languages and uses this as further proof of the poem’s indecipherable qualities. Even in the small quoted section, beside a number of place names from differing countries, the language switches between English, French and German. This is more obvious and, at first, puzzling with the stanza given its full context as follows:

I recognized Luxembourg by the leaves on its trees

then came industrie chimique near Thionville,

light above the heavenly vaults,

One of the great pleasures I find in Sebald’s writing is this change of language, something that always seems to survive the translation process. It’s difficult to describe but it’s in these place names and words that the Phantom Coincidence is lying most in wait. Of course, Strasbourg being as it is, languages and culture is incredibly permeable there in the first place. It’s the theme of the current book I’m working on and its in-betweeness  (the “L” word is banned from my writing this year) within its history is incredibly Sebaldian. Passing over between France and Germany through various wars, the city has that same air as Sebald’s process, lapsing on an aesthetic level (especially in its buildings) between the two cultures, making this same change in language highly appropriate for poetry about this small part of Europe. This is even before highlighting the original journey I took that was ghosted by Sebald; from the north west of Switzerland, another element into the mix and itself a place of amalgamated languages. 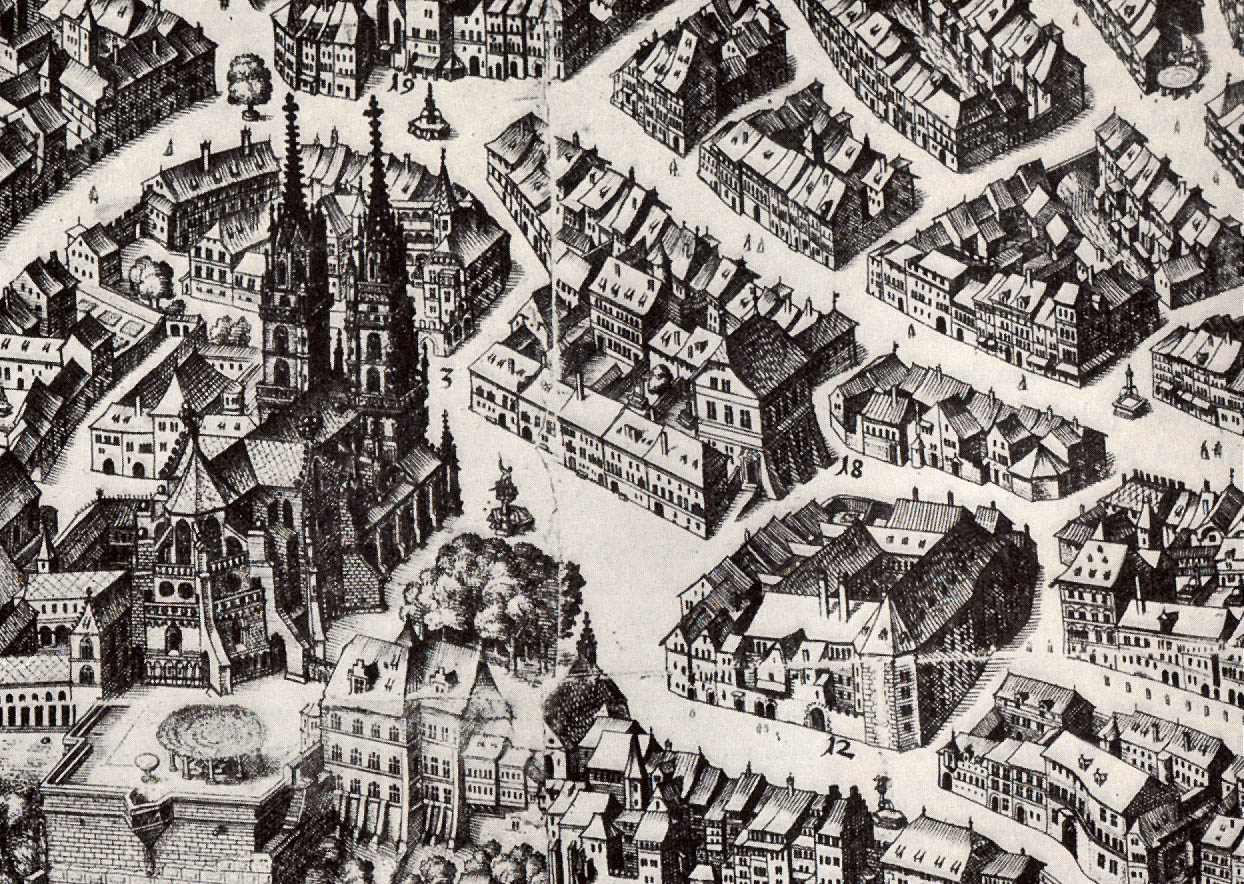 Sat on the couch that night, I re-read the fragment over and over again, trying to understand why it had had such a great impact, as if the floor had dropped from beneath me. I had been so deep within research regarding the city that to see it in a writer’s work I thought I was familiar with was surprisingly affecting. Was it Sebald’s Phantom Coincidence, Cole’s coincidence in the choice of poem or simply nothing at all, the product of an overtired mind? Putting it into words now, it seems rather inane and probably something to do with being in that specific period and place; in other words impossible to fully describe. But, in that moment, the words jumped out from the essay, the cathedral’s lights seemed more aglow than I had ever seen them, and the city and the page, in that brief instance, seemed to become one.