Like last year, I have tried to keep up with enough new releases to eventually have something say at the end of the year.  And exactly like last year, I have virtually failed to see ten new releases that I’ve actually enjoyed.  I quietly accepted once again that, with some notable exceptions, new digital films are not especially for me and require a huge crossover with other interests of mine to be on my radar. After the recent fallout from the Sight & Sound poll, I’m admittedly rather glad to be largely removed from the world of new film criticism, which manifests online as “Film Twitter.” The poll this year caused some of the worst takes online I had seen of any medium, from the snobbery directed towards television to even the very method with which a film was viewed.

I’ve still managed to see some good new releases, however, and it goes without saying that this has come with a wealth of older films which I’ve tried to watch at least one a day.  With the new releases, however, I’ve not felt particularly strong enough about any of them to warrant putting them into an order (and, as a side note, all of the fiction films at least were greatly let down by questionable musical scores).  But there has been plenty of innovation, investigations of interesting subjects and films that I still want to see.  Perhaps they’ll make the secondary list of first time viewings next year.

Also worth noting are the many films that I didn’t get the chance to see this year but may have made this list judging by subject, director and other factors:

As can be ascertained from the list below, I’ve been interested in filling in the gaps in my French cinema watching this year.  This has been partly because I have wanted to actually improve my French but also because the more I researched the directors whose work I thought that I knew, the more I found films that I had not seen.  Therefore, I’ve worked to dive deep into the filmographies in particular of Truffaut, Varda, Chabrol, Rohmer and various other new wave directors that, for quite a while, I’d been denoting by the most popular of their films rather than the entirety of their work.  Without a doubt, the best film I watched this year was Varda’s beautiful recreation of the life of her partner and director, Jacques Demy, in Jacquot De Nantes.  It may even be the most moving film about cinema that I’ve ever seen.

Elsewhere, I found much to praise in discovering the work of Marguerite Duras whose features and shorts have been a revelation.  The only film I could put in my top 10 here was her mesmerising India Song; a sort of colonial, gendered vision of Resnais and Robbe-Grillet’s Last Year In Marienbad.  All of her films (of which I’ve mostly now watched bar 3 or 4) are worth exploring and are just as daring as anyone in the new wave (however, they have virtually nothing released on UK DVD labels).  Unlike the last few years, there has been little in the way British cinema that has impressed, perhaps because I’ve already watched so much from the eras when it was really on form.  Though there is a sense of sadness to this, especially in regards to horror which I’ve barely watched any of this year of good quality, it’s an understandable evolution, especially considering my own general dissatisfaction with the UK (and my increasing desire to jump the Channel).

I’ve read far more this year than my eyes could cope with, mostly as a reaction to the tedium of PhD reading which has almost always been a chore.  To counter it, I’ve explored a great deal of European writers in particular (again a reaction to the UK’s prevalent trends in both politics and atmosphere).  I’ve read more by Thomas Bernhard this year than anyone else and I held back putting more than one of his books in my top 10 (Concrete, Wittgenstein’s Nephew, The Woodcutters and The Loser have all had profound effects upon my own writing).  Unlike with Bernhard, I could not resist putting two books in my top ten by Rebecca Solnit, both of which have been revelatory and a great comfort as the world has turned into darker orbits.  I think this year has defined for me personally what I’m looking for in the books; experimentation, openness, post-modernist ideas and, probably, a western European slant.  When my fiction writing eventually becomes public in full, this influence will be clear. 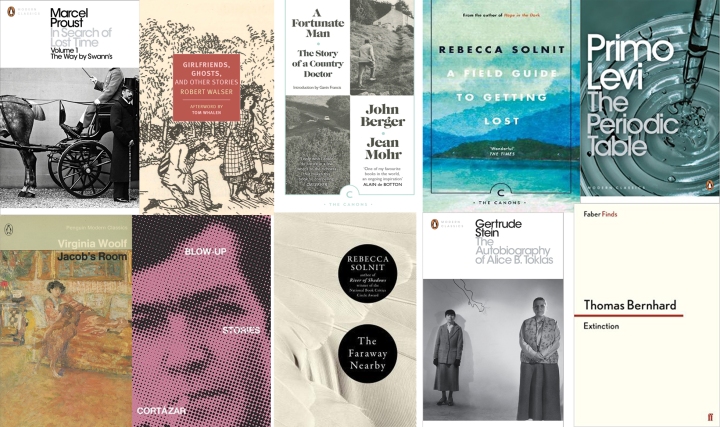 On a personal note, my work has become far more wide-reaching this year.  Aside from finishing writing my thesis, I have published my first book, Folk Horror: Hours Dreadful and Things Strange, finished writing my first fiction book, A Hauntography, finished four films whilst shooting one other, and greatly expanded my writing to publications from the BFI to Little White Lies, Sight & Sound and others.  Hopefully I can continue this streak of work into the new year but, for the time being, some work I have been particularly happy with is linked below.