Note – Since the publication of this article, a publisher of Aickman’s has been in touch with more details surrounding the photographs.  They were taken by his friend Jean Richardson on a number trips taking place in the mid 1970s and not on one singular trip (as Aickman’s limited wardrobe falsely suggests).  The stone is King Doniert’s Stone in Cornwall whilst the coastline with the pentagram shadow is in fact in Yorkshire.  Other details were given but, as the point of this article is a response to tone, atmosphere and aesthetics rather than a bland fact check, the piece will remain unedited as that was not its goal. (Adam)

Robert Aickman had a number of interests.  Aside from writing some of the strangest and macabre pieces of weird fiction produced in Britain, he also co-founded the Inland Waterways Association and spent just as much time working on the conservation of Britain’s canals as he did crafting dreamlike horrors.  There’s a natural linking between the two, both finding interest and expression in revitalising the old; Aickman redefined and reconstituted the short form horror as much as the waterways whose restoration he oversaw.  But when I first came across a handful of the man’s holiday photographs online, there was something more to them than other photographs usually used to represent the author.  I merely treated them as interesting on a first glance; as a personal curio gifted to the public of a relatively private man.  But something else was embedded in these photos, a sense that Aickman, like M.R. James and Arthur Machen before him, had walked and explored the places of his stories.  What was more, the photos captured Aickman’s underrated sense of dark humour; that presence that, even in his strangest stories, gives a sense of the writer’s grimacing smile overseeing the unfolding horrors.

Though there are certain differences in the photos, I’d wager that most were taken on the same trip.  Aickman is seen wearing some of the same items of clothing across photographs and even carrying the same thermo flask in two of them.  Yet there’s scant information about them.  Their date, locations, the route he took on this trip and who took the photographs are a relative mystery.  They’re as anomalous as the threats of his stories, never quite forming or solidifying; a possibility rather than a probability.  The only definitive photo is of Aickman standing next to the grave of Copenhagen, the horse that the Duke of Wellington rode into the Battle of Waterloo.  The grave sits in the grounds of Stratfield House in Hampshire, Aickman leaning on it whilst holding a book, clearly posing.  The oak tree behind him stands tall, the bare wood where a branch has been cut staring out like an all-seeing eye, dampened dark by exposure to air and rain.  Both Aickman and the tree are unblinking.

This very specific place renders the locations of the other photographs interesting.  Many of the others are clearly by the coast so it’s debatable as to whether Aickman made the journey simply to see the estate and the grave of the horse.  Even writing the phrase “the grave of the horse” seems impossibly Aickman-esque.  At any rate, Aickman spent most of this trip on the coast, probably somewhere near the coastline.  The writer is seen looking out to sea, the shadow of a strange object to his right looking like the beginnings of a pentagram.

Aickman visits what seems to be a stone circle, relaxing on one of the stones that I would wager to be also near the coast; there are, after all, many such stones that spring up around such places.  It is the old country in many ways and perfectly encapsulates the writer and his casual standing within the eerie.  There’s a yellowish, almost sickly haze to this photograph.  Before I had seen it, I had struggled to describe the effect of his fiction.  The haze of this photo produces the same effect as his stories; blurred, dizzying, sickly.

There are other photos of the man, standing in unknown buildings, picnicking on Jamesian coastlines, the marram grass spiky around him as he sits in an equally heady yellow jumper or standing in a stone archway.  Aickman is relaxing away his days, probably around the time he’s editing the Fontana horror anthologies.  The surroundings may seem inane but the mind is full of terrors, considerations of the horrific.  It’s undoubtedly a projection on my part but one that also works with the obvious aesthetic likenesses between the photos and the stories; Aickman’s stories are very much faded, unnerving Polaroid’s, snapped in the darkness of a paranoid England. 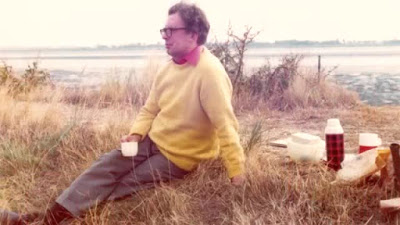 But the last picture to speak of is the most atmospheric, perhaps because it is in black and white and the clearest of the writer who looks out onto the view with a sense of knowingness, aware of himself and the photographer.  Aickman is sat on a bench, enjoying yet another picnic by what looks to be a lake.  I believe it to be a different trip entirely, later in the year and far from the sunny places of the previous trip.  The trees are bare from the frost of winter and Aickman is wearing a much thicker coat though his trusty thermo is still a constant companion, impossibly kitsch in its design.  I wonder what could be hidden in the lake, what could happen to this location seen through Aickman’s eyes. All manner of horror is possible when seen through his eyes.

A dead stone to lean on,

A grave or a standing rock,

Used for some ritual,

Unseen by the eyes of the locals.

The grave is that of a horse,

With a skin of moss and lichen,

The oak tree behind staring,

Through its wounded pupil,

There is a lake and a bench,

To drink and wonder besides,

With hot tea on a winter’s day,

As a spirit floating above water.