On a rock, there sits a man lost in thought.  Or perhaps he is not thinking at all and is instead letting the landscape around him fill his thoughts unconsciously.  Werner Herzog’s 1976 film, Heart of Glass (Herz aus Glas), has one of the director’s strongest opening set of images as the main character of the film sits in a foggy Bavarian landscape with life passing him by.  There’s something in this sequence that defines Herzog’s practice as a filmmaker but also his state of mind; that destruction is inevitable but so is the continuation of the world around after it has occurred.  Through these images of landscape and contentment, even as the character describes the social disintegration that Herzog is about to dramatise, Heart of Glass cannot help but remain optimistic, even when the society at the heart of the film is essentially foretold as doomed.  It is in this sequence that Herzog’s particularly unusual brand of optimism can be seen; the optimism of our eventual absence.

Jörg Schmidt-Reitwein is Herzog’s cameraman and together they create a collage of landscape images unlike anything else in the director’s filmography (perhaps further heightened by the fact that it is shot on film).  Rather like Kasper Hauser, Hias (Josef Bierbichler) is first seen within the landscape.  As the titles progress he is given further perspective; he is with a herd of cattle, grazing in the early morning light.  This is important and not just to show that the prophet is outside of the society of the film.  For the potential of life after the community of the film (and systems that govern it) is shown, even in a simplistic sense with no thesis as to how Hias actually survives.  Using an early use of time-lapse photography, Herzog then shows the view down the Bavarian mountains, the clouds seeming to race over the landscape like a wave that never recedes; even more fitting considering the sea-based ending of the overall narrative (far and away from Bavaria).

Everyday life washes over the valley, uncaring as to the calamity that is befalling the community that lives there.  Their desperate search for the secret of making ruby glass – both desired as a financial benefit and as something more esoteric – is rendered more and more pointless as it seems the community almost know, even without the foreboding of Hias, that the corruption of their system has already given their village a deadline.  When Herzog puts this time-lapse near the beginning of the film, it frames the rest of the drama as almost inconsequential, largely as we are seeing it through Hias’ eyes.  This is the absolute clear perspective from which the film is shot, especially as Herzog then cuts from this time-lapse to show that a similar view is being watched by Hias, now lying in the grass on the mountain side.  Even more telling is oft-quoted trivia about the film that the rest of cast, Bierbichler aside, were hypnotised by Herzog and were acting in unconscious, unpredictable ways.  Like the land around him, Hias has freedom, even if it is solitary in nature.

He channels a sense of both Casper David Friedrich and Mary Shelley’s “last man” as he begins the narration looking down onto this view.  “I look into distance to the end of the world,” he says, “before the day is over, the end will come.  First time will tumble, and then the earth.”  In some ways this has already happened in the time-lapse shot before this monologue; time being intertwined with the land through experimenting with the two.  The contrast between the shots in this sequence is staggering: the frozen, static shots of Hias sitting between the rocks or lying on the grass and the time-lapse of the clouds racing over the valley.  As Hias’ speech progresses, Herzog frames the destruction of which he is talking through natural landforms and this is clearly to emphasise the violence of the land.  The secret lost to the community is alchemical, of the land, a skill or craft clearly (on a small scale) harnessing the natural processes that created the dramatic topographies all around them.  Hias’ prediction is given weight in these images as it shows how easily reversed these processes of landscape can be; the violence of a waterfall eroding the rock, “I begin to fall… a vertigo seizes upon me.” 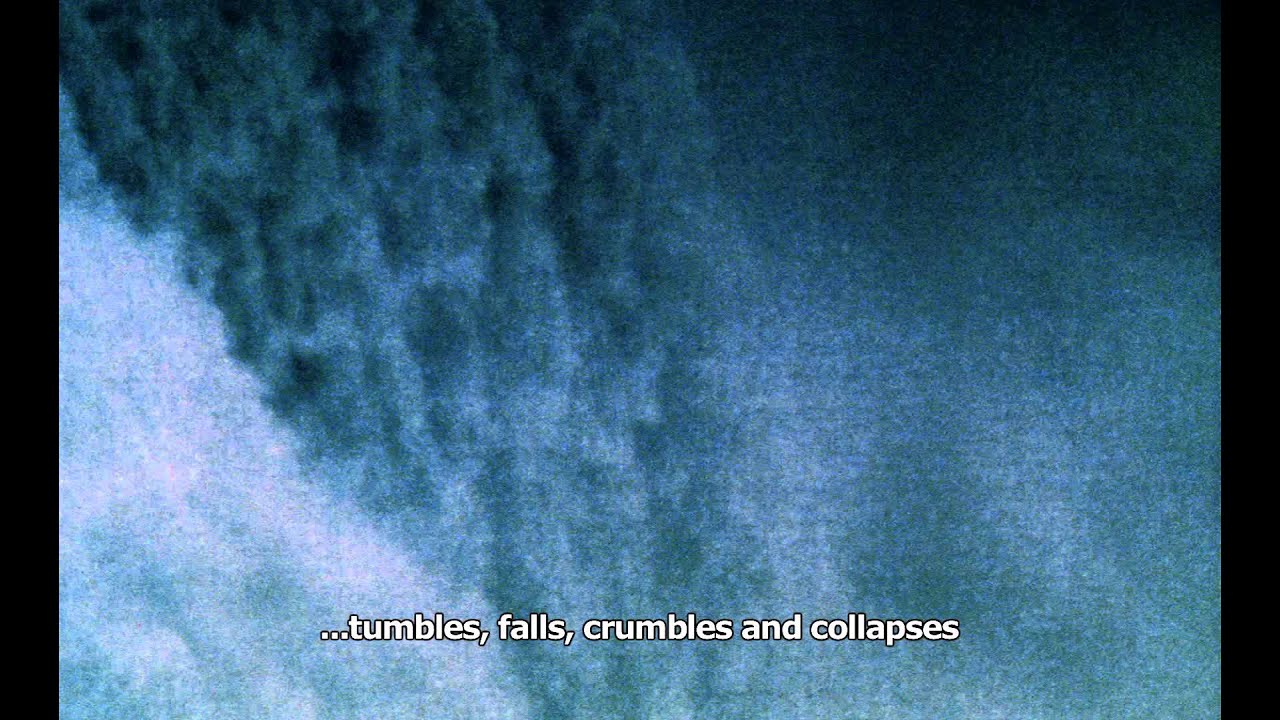 With all of this talk of destruction, it’s surprising to find optimism within its teleology.  Hias concludes his speech as the music of Popol Vuh becomes more major and positive, suggesting that “Everything becomes light, I fly upwards.  Out of the falling and the flying, a new land arises.”  This is Heart of Glass in a microcosm and not simply because of its obvious potential symbolic application to the process of glassblowing.  Even with the next seventy minutes now portraying the downfall of a community, through greed, ignorance and superstition, it still remains framed in an optimism derived from the strange brutality of the land; one that rejuvenates, destroys and moves on, with or without people making their way in the world; “… the earth rises out of the waters” as Hias suggests.