When Jeremy Deller took control of the UK’s pavilion in the 2013 Venice Biennale, the press coverage caught hold of one specific aspect that the artist discussed; its “aggressiveness”.  With environmental concern sat at the heart of the exhibition, alongside the general political upheaval caused by the coalition government during its third year of power, it’s unsurprising to find Deller’s work channelling some form of reaction.  This was the year that saw Storm Jude decimate communities, especially in Wales, leaving five people dead; severe floods around various coastal retreats, most alarmingly around the Devon and Dorset coasts, wiped away the land; the proposed and pointless badger cull, created as a political gesture to appease farmers, was tested in two areas with 1000 badgers killed; the governmental frameworks for fracking were coined resulting in the powerful position that the dangerous and unstable practice now has today.  In other words, 2013 was a definite year when the environment was targeted by bureaucracy and yet itself reacted violently back with natural disaster.

Deller’s work, along with several others during that year, captures this mood as the fight for the environment begins to spiral.  He presents an almost utopian vision of wildlife having the power to defend itself and its ecosystems fully and fight back against the causes of many such disasters and attacks.  This culminates in the pavilion’s most recognisable and important work, the wall mural, A Good Day For Cyclists (2013).  The mural depicts a hen-harrier carrying a car in its talons.  The perspective is unusual and presents an intriguing question; is the bird increased in size or is the car shrunken?  From the general politics of the pavilion, it is clear that the bird is its natural size and that the car has been miniaturised, expressing the machine’s inconsequential existence in comparison to the bird; evolved over millions of years from dinosaurs into one of the ultimate hunting machines, having the potential to far outlast any man-made technology.

The choice of bird is also politically charged.  The hen-harrier is one of the most persecuted and endangered birds in the British Isles.  Because of the practice of grouse rearing and the prescience this industry puts on the protection of its stock, the bird is regularly poisoned and shot illegally by game keepers.  It is the ultimate avarian symbol of a class-infused vision of the British (and especially Scottish) landscape; where our wildlife is deemed disposable simply for the past-time of a more affluent and powerful hunting minority.  The hen-harrier is attacking the car not simply as a code for general global warming and man-made disaster but as a code for the total human effect on the planet; a gesamtkunstwerk of careless destruction and casual extinction.  The car used to be a perfect symbol of the British class system; before its ubiquity, it summarised issues of money and class in a way that is almost inconceivable today.  Now, it is the bird itself which is the symbol of the landscape-infused class struggle, one that cannot be so easily protected from the wants and needs of a selfish and richer shooting class.

A Good Day For Cyclists also taps into that same ethos that the writer, J.A. Baker, began to access in his obsessive following of another (then) endangered bird, the peregrine falcon.  In The Peregrine (1967), Baker charts the species when the first wave of mass-industrial farming practices were coming into play.  With the various pesticides contaminating the food-chain of post-war Britain (DDT especially), the food chain was decimated, leaving the bird either without food or killing and eating already-poisoned prey.  Our presence in the landscape, as is often the case with explicit links to technology, has pushed these species to the very brink.  It wouldn’t have been out of character for the hen-harrier to be carrying the body of a gamekeeper or the mural to depict a peregrine carrying a fertiliser truck instead.  There is, however, a more general environmental message vital to 2013 and to today within Deller’s work that echoes messages about the environmental plight during that year.

Looking back at the mural, it’s surprising that it didn’t become a wider symbol for some new environmental movement.  It captures perfectly the desire to both fight back against the consumerist visions of our landscape and the treatment of its wildlife as product or produce, but also to push our environment to be impossibly self-sufficient in its defence; impossible when our population and our economic systems are so wide-spread and out of control.  Deller’s work, both concerning this individual example and the general work for the English Magic pavilion, takes on a depressing but vital new prescience in 2016 and 2017.  With the UK’s decision to leave the European Union, the potential removal of its many environmental restrictions and policies puts these once previous threats back onto the table.  With no restrictions set upon various land workers – and it is clear from the last fifty years that such strictness is absolutely necessary – who knows what species will fall by the wayside in the accelerating years of the anthropocene; species that could carry cars in their sharpened talons with just a little thought from us all.

In the talons of the harrier,

In the gut of its food and prey,

In the clutches of a keeper,

In the meadows empty  and grey,

In the rivers of the fens,

Weed chokes out the light,

In the houses of the hunters, 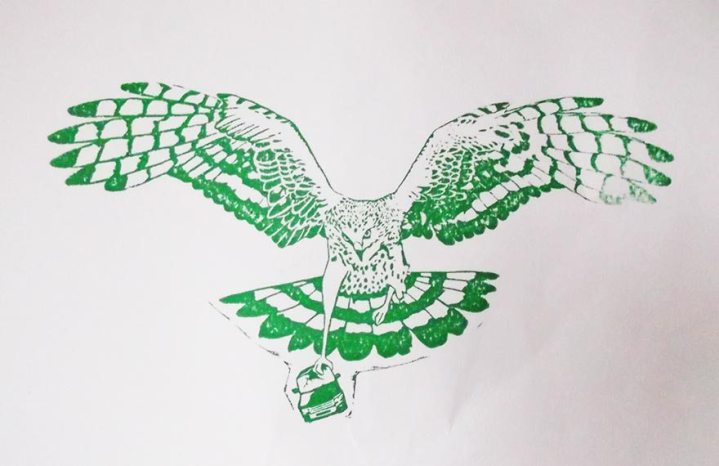 One thought on “Responses: Jeremy Deller’s A Good Day For Cyclists (2013)”