Hitchcock’s early British films tend largely to be devoid of the interesting, endlessly analysable scores his later films have, (thanks mainly to Bernard Herrmann being sat at the musical helm).  It seems to have been an almost standard practice to use a handful of musical scores or fragments in the occasional scene but to largely leave the films musically blank outside of their opening and closing titles.  The Lady Vanishes (1938) has a more interesting, perhaps even innovative, use for its music in comparison to the films around it.

The film comes in the middle of a batch of spy thrillers and mysteries with Hitchcock having made almost one a year during the 1930s; most famously The 39 Steps (1935) but also The Man Who Knew Too Much (1934), Secret Agent (1936) and Sabotage (1936).  Many of them feature visual innovations and general quality in filmmaking but few feature an emphasis on music (if at all) as The Lady Vanishes does (The 39 Steps has a brief momentary revelation when music gives the game away as to how the spies are siphoning information out of the country).  What is more startling is that this subtle feature of musical narrative use doesn’t actually reveal itself to be as such until well into the final quarter of the film, making a review of all that has gone on before it revealing of new audio-visual qualities. 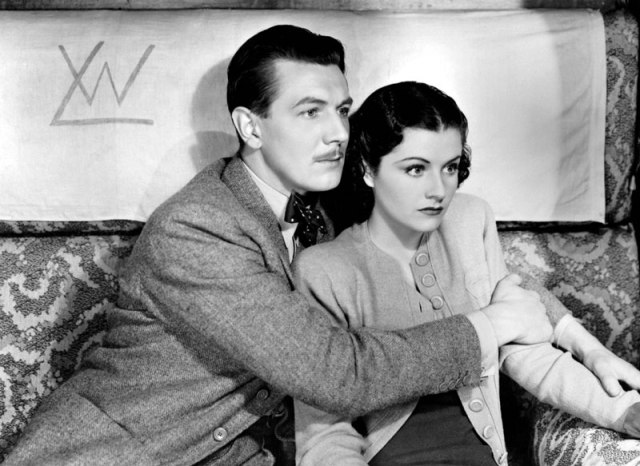 The musical elements first appear in Michael Redgrave’s character, Gilbert, who is a clarinetist researching old folk songs from Switzerland where the film initially starts (in its half an hour of seemingly comedic intent).  Within the extremely British but amusing jokes that take up the majority of the film when in the Swiss hotel, Hitchcock actually smuggles in hints of the central mystery through music.  There is seemingly an awful lot of musical connection happening, from Gilbert’s interest to the musician outside serenading the, soon to disappear, Miss Froy (May Witty).

A seemingly random attack on the musician serenading goes largely unexplained but reading the film in a musical way offers some explanation. The narrative becomes focussed around Miss Froy’s revelation that she is in fact a spy carrying secret information in code (hence the attempts to kidnap and make her “disappear”). This code takes the form of a musical melody that is given to our two main protagonists later on when they are all in grave peril.  Listening to the short melody shouldn’t be too new for the viewer for they have heard it before. Back at the hotel, away from the bustle of Gilbert’s loud recreation of folk music in his hotel room, the serenading musician was basically playing the coded theme under Miss Froy’s window.  Perhaps this musical rendition was the final exchange of information between spies, giving Miss Froy the code she and the British needed before he’s killed for being an accomplice to the allies.

Further on in the film, Gilbert’s musicianship comes in handy for remembering the vital tune.  His role as a musician was laid on quite heavily during the earlier scenes so the revelation that music would become a vital component to the film is already in its groundwork.  When Gilbert barges in to Iris Henderson’s (Margaret Lockwood) room, his identity as the man from upstairs isn’t acknowledged until he gives a quick toot on his clarinet.  The idea that music can define a handful of the characters, both as the heroes of the film and as individuals themselves (the coded melody virtually becomes a leitmotif of the character of Miss Froy) is quite a revolutionary one for Hitchcock whose use of music up to this point had been largely typical for the era.

As our heroes arrive back in London there is an air of sadness around them.  Not only does it appear that Miss Froy was killed on the border during the attack but Iris is also dreading meeting her soon-to-be husband.  However, the two must get to the foreign office in order to pass on the coded melody.  In one of Hitchcock’s strongest final moments, he uses music as a warm and welcoming happy ending.  After constantly repeating the melody to himself since he was taught it, Gilbert forgets what it is while waiting outside the office.  As they go to enter, the slow and wistful melody is heard diegetically on the piano.  The two characters are given a brief moment of surprise before a happy realisation is assured as the melody can only mean Miss Froy is alive (which she is: sat at the piano playing the melody).  The scene even harks bark earlier to Gilbert’s entrance into Iris’ room with the clarinet; acknowledging presence and narrative through a simple but emphatically important music fragment.