Chance played a huge role in the writing of Robert Walser. I can picture his slow meanderings around towns and valleys, spotting something that fires a brief need to write. I can see him getting excited by the way the sunlight reflects off a lake’s water in a certain way, by the fustiness of a suited man coming out of a bank, by a woman’s lavish attire sending him into romantic daydreams. Walser chanced upon small, beautiful details everyday and Tacita Dean did the same in her collage work inspired by him, Berlin And The Artist (2012).

To coincide with an exhibition in New York surrounding work inspired by the writer, Dean was commissioned for a piece and chose the subject of Walser’s time in Berlin as her particular angle. Walser stayed with his brother Karl in this period, a noted illustrator whose work can be seen in a number of Walser compendiums. Using a found objects such as illustrations, photographs and postcards, Berlin And The Artist seeks to replicate such chance whilst equally finding its own particular narratives in the lost and the found; in the meandering uselessness of creative daydreaming.

Dean has some set parameters for these works. Searching in markets in Berlin, the objects used were roughly from the same period that Walser was living and working in. She even came across new work by an illustrator called Martin Stekker whom she considers may have possibly met Walser through his brother’s creative circle of links and friends. In an interview for Frieze she tells of the discovery:

“Very strangely, we came upon hundreds of pencil drawings by an artist called Martin Stekker. It was a remarkable discovery: Berlin observations from a century ago… Well, they were beautiful and I knew I was working on this project for Donald, and Walser was already on my mind. I later researched Stekker to find only one reference to him on the Internet and discovered he was born in the same year as Walser. Just after that I bought another newly translated collection of Walser’s writing, Berlin Stories (2012) where I read Berlin and the Artist. Immediately I saw a connection between Stekker’s drawings and Walser’s stories, both observations of Berlin life from the same time.” (Frieze)

A Walserian coincidence if ever there was one, this layering of history and chance perfectly embodies the writer’s work. On an aesthetic level, such themes are expressed with equal effectiveness. In one of the collages, a sketch of a man kneeling (perhaps even praying) has his arms complete a circle from another drawing. These objects are both self-contained and within communication with each other, aiding the effect of rummaging around within someone’s memories. In another of the collages, two separate photographs show a man writing at a desk. It is a different man in each photo and a different desk but the pair work together. Through difference there is likeness, rather like the cuts in a film; different angles and times creating one whole. 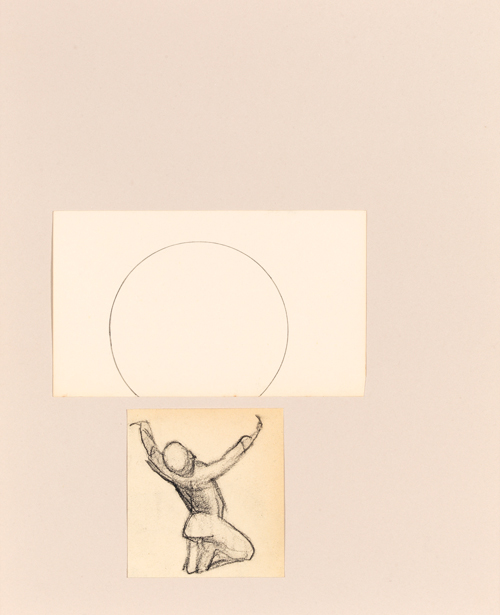 Even if such a form automatically contains some askance of meaning, it is not necessary the point of the work. The objects are connected by a blank, aged looking card as their background, but separated into a number of different frames just so that the context of each little collection can remain unmuddied. But even if such pictures had found their way onto one large canvas, the chaos of the endless connections between the images would still have been fitting. For Walser’s own satire of bureaucratic order simultaneously bowed its head to it and quietly whispered curses upon it when its back was turned. Dean highlights her own potential codes in this work, finding and providing some order in what was orderless. I imagine it was rather like the process of finding Walser’s infamous microscripts and turning them into cognisable books for people to read. These are equally images to be read though it is not strictly required.

Walser once wrote that “We don’t need to see anything out of the ordinary. We already see so much.” His writing was the rebellion found in taking notice of things, acknowledging the forgotten and the taken-for-granted things that slip by us every day in our rushing to be behind the desk. In Berlin And The Artist, Dean harnesses that same curiosity in finding ephemera, assumed to be lost (or given no thought at all) and lifting it out of the white noise of history. In doing so, she not only creates a work that is in the spirit of Walser but also a work that revels in that same, always unique sense of accident.

Of that particular aged colour,

That sepia tinted desk and sleeve, which words poured from,

There can be much to say,

Or nothing at all.

I crossed the mountain with black ink, as a marker for loss.

I cannot recall this loss, only its aged colour;

That faded moment which smelt of books, ripe with dust and dry-rot.

A heart was scratched in graphite on the back of a lost postcard,

And delivered by poplar hawks.

I wondered if the cross on the mountain,

Was a teacher’s mistake or the markings of the spot,

Buried within which there lay a family album,

Where we all soon ended our time.

I walked away all the same.