It came with a great sense of relief that, on the 29th of March, I had a plane to catch.  This plane that I was to catch on the afternoon of the 29th was heading to Strasbourg; a visit to ma chérie and an escape from the 29th of March or what the 29th of March now represented which was everything contrary to reason.  Exactly a week before, it was the anniversary of Johann Wolfgang von Goethe’s death, dying 185 years ago to the day of apparent heart failure, the disputed last words of Goethe just before he died being a simple request for more light.  Visiting Strasbourg was my request for more light or, perhaps more accurately, an escape from the darkness of stupidity and delusion that I now increasingly associate with my homeland.  Upon arriving to Strasbourg, my shame – for it was a shame, a shame with such immense power as to annihilate all sense of comfort with even speaking my own language – turned to excitement.  Mehr licht, plus de lumière, more light.  It was sunny; ma chérie and her many friends told of my luck with the weather which, for the 29th of March, was incredibly bright.  There was more light.  It was while exploring in this beautiful, open, happy place, seemingly occupied almost uniquely by beautiful, open, happy people, that I learnt of several facts about Strasbourg that bred a strong desire to walk its streets; Goethe had lived here for a handful of years in a much celebrated stay, the city was intentionally international in feel and spirit, and, most importantly, it is home to the European Parliament, the Council of Europe and European Court of Human Rights.  Being a European with a desire to keep this status, walking in search of mehr licht seemed appropriately cathartic.

The walk began in Place du Cygne near the Barrage Vauban; a seventeenth-century bridge and weir filled with stone sculptures and a roof overlooking Square des Moulins.  The streets of this city are so decorated with immensely old buildings that to simply see official sights would be an empty gesture.  I had forgotten about the United Kingdom by this point.  Following the river along the terraces and Quai Finkwiller, it was crossed at Rue Martin Luther where the Église Saint-Thomas sits.  Every step was a step away from the 29th of March, further aided by time making the 29th of March darker in my mind’s eye.

Walking down Rue des Serruriers, passing the many cheese and nougat shops, a statue appeared in a large square.  I first learned that the statue was in fact Johannes Gutenberg when, in fact, seeing that the underground car park there was named after him.  The statue gave the conclusive detail as Gutenberg held his large book and displayed a fetching beard.  I thought of printed media, the achievement pioneered by the man, the medium that Goethe would later take advantage of; the printed media that also meant that I was soon to officially no longer be a part of this.  Gutenberg created a way for the world to reflect back upon itself but he could not have foreseen the depraved level with which his form would eventually shine back, his mass media bastardised to mere lies; mehr licht was needed.  As Goethe writes in Faust, “A man sees in the world what he carries in his heart.”  What must we be carrying today in England to see such a place as Strasbourg as anything other than a high watermark of cities? 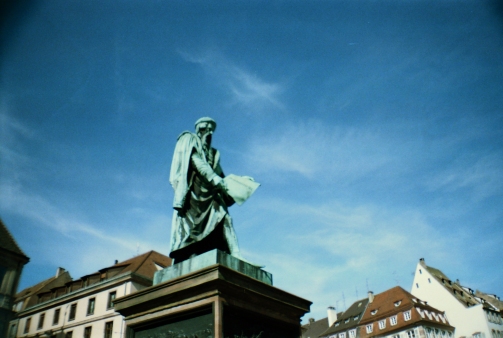 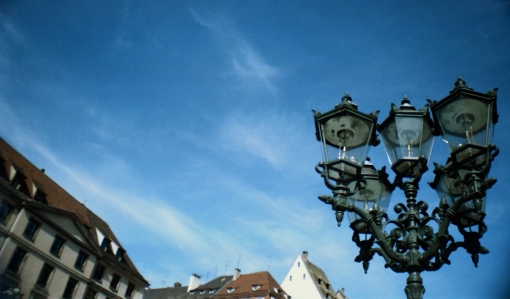 Spying Strasbourg Cathedral, a detour was called for passed buildings which seemed to creak with age as each footstep pressured the adjacent ground and cobbles.  Goethe adored the cathedral, writing that “The more I contemplate the façade of the cathedral, the more I am convinced of my first impression that its loftiness is linked to beauty” before going on to describe it as a “wide-spreading tree of God.”  Its organic structure explains this description but be could equally applied to several buildings in Place de la Cathédrale; especially the Maison Kammerzell which, according to ma chérie, is the oldest building in Strasbourg city. 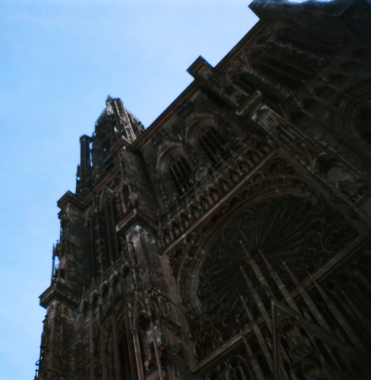 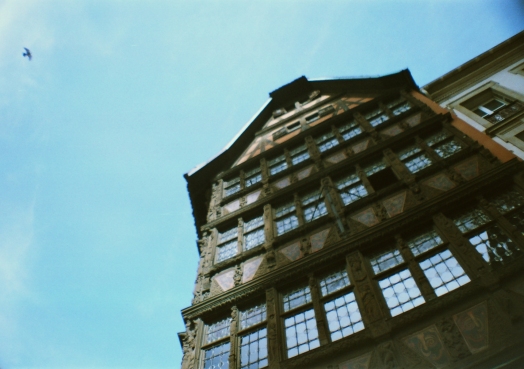 We folded the walk back upon itself to visit the house where Goethe stayed during his few years here.  Appropriately it is further down Place Gutenberg above a shop, and is commemorated by a small plaque.  The flowers blossoming from the trees added a dreamlike quality to the roads and squares, especially around this part of the town.  Finding the river again, we ventured much further out of the centre, finding the university where one of several Goethe Institutes resides on the continent.  There, on the juncture of Place de L’Université, Goethe looks on at the passing traffic with an appropriately blank expression:

“If the whole world I once could see
On free soil stand, with the people free
Then to the moment might I say,
Linger awhile. . .so fair thou art.” 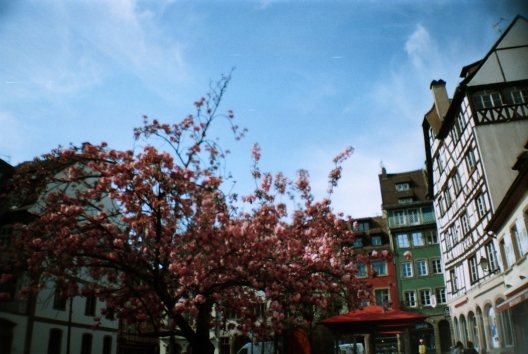 The banks of the river became even more luscious and green, bustling with birdlife as the water curved towards the European Parliament.  The building seemed modern but again organic as if grown quite naturally from the area and the ideals around.  A sense of quiet dread pervaded, the 29th of March plaguing the memory yet again.  The European Court of Human Rights and the European Council were further on.  One building in particular was fronted by an interesting stone man which rather seemed to represent how Britain now stands; outside, alone, growing moss and lichen in the damp evenings.  I spied a Union Flag, waving at the end of the long row of flags outside another building; it was already the odd one out, ready to be folded and thrown into the river tied to an almighty rock.  Goethe once wrote that “We do not have to visit a madhouse to find disordered minds; our planet is the mental institution of the universe.”  One particular place is acting like the padded room of this madhouse currently and, as I walked hand in hand with ma chérie back through the beautiful Parc de L’Orangerie, I thought of Goethe on his death bed, far and away from the wide spreading tree of God, and the smaller blossoming trees nestled around it; the shadow of our own misfortune and virulent stupidity shutting out the light no matter how much we pleaded.  “There is nothing worse than aggressive stupidity” wrote Goethe.  Strasbourg provided the light I needed that week but Britain felt far away on the 29th of March; in some other time, alone in the dark. 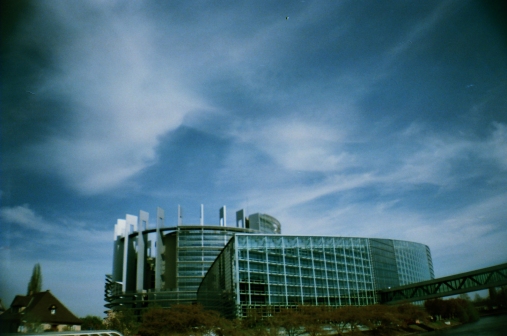