Interest in Robert Smithson’s landwork, Spiral Jetty (1970), peaked for me recently when reading Geoff Dyer’s interesting collection of travel works, White Sands (2016).   Dyer described in his chapter, entitled Time in Space, his journey to the artwork and the delayed reaction in appreciating it; in fact most of White Sands deals with the delayed and perhaps even nonexistent reaction to the finale of a themed journey, whether to the house where Theodor Adorno lived or to see the Northern Lights.  I think this theme – that of the cascading effect of expectation, journey and experience – is one inherent in most landworks and land art in general, and presents an interesting way of discussing Smithson’s work especially.  Like creations by others who work in such delicate and finite landworks such as Richard Long and Andy Goldsworthy, Spiral Jetty could be argued as being a moment of capture but, unlike the work of those artists, its finitude is much slower; the perception of which is part of the work itself.  This shows in the very construction of the work which required numerous additions of a great deal of raw material in order to stabilise it even in its most original and earliest version; Smithson’s adhering to the word “entropy” being poignant and at the heart of the work.

In this sense, Spiral Jetty is very much designed to be uncanny in its form – built into and around the natural landscape of the Great Salt Lake, giving the impression that it has always been there – but also that its disintegration is part of the work (as is the perception and the journey to the Spiral Jetty after it has disintegrated and has been hidden by water).  I sometimes wonder what the effect and feeling is like to walk upon the Spiral Jetty.  In my head, I imagine it to feeling like walking over someone’s grave; both Smithson’s and some symbolic representation of the health of planet which, as it worsens, also accelerates the hiding and entropy of Spiral Jetty itself.  Dyer discusses this as a quietly pivotal aspect of the work:

“Was it worthwhile travelling all of this way to see something we might not be able to see?  Well, pilgrims continued to turn up even during the long years when there was definitely nothing to see, so it seemed feeble not to give it a chance.” (2016. p.87).

The idea of the work being at the mercy of the natural landscape is also an interesting facet.  This makes the sense of journey required to see it incredibly unusual, almost asking the viewer to take a gamble.  But perhaps it could be argued that the journey is actually part of the work; that, as well as a mental journey or thought that a work is usually required to conjure, a priori or otherwise, works such as Spiral Jetty automatically embed some new experience and journey into its viewing before the viewer has even experienced it.  This makes readings of it potentially infinite as each viewer will be forced into and experience a different journey in order to get to the work.  Unlike in a gallery which, in spite of naturally containing a multitude of individual and unique journeys, the work is guaranteed to be there at the end, Spiral Jetty is a gamble, a risk; the journey possibly being the only thing to take away from the experience if unlucky with the rising and falling waters of the Great Salt Lake.  In this sense, Spiral Jetty resembles a rebellion against the interpretative power often forced upon works in a gallery through architecture and curation with other works.

I began considering recently how such a contrast works and kept coming back Michel Foucault whose idea of an epoch-based episteme seemed to speak, at least symbolically, if not literally, about such a relationship.  Foucault’s episteme hints at parameters set upon knowledge through a priori relationships to what is already grounded.  If work in a gallery is trapped through such historical a priori relations then Spiral Jetty breaks apart such assumed content by both removing the historical potential through its situating within the landscape and through using its location to add a forced destabilisation of journey to each individual viewing; in other words Smithson’s work reignites the individual experience of art which, for so long, has been subject to heavy parameters of reading and interpretation through the proliferation of the gallery system.  The individual has no choice when confronted by this work but to bring their own reception to the experience because that experience is so enshrined through the different urges which lead to viewing the Spiral Jetty in the first place.  The fact that the object itself  hints towards this very spiralling  form of reception shows Smithson to be totally aware of the placement of land and perception within a work of art; something that marks him out as a true visionary.

There is a jetty;

Journey to its centre.

At this centre, there may, or may not, be the jetty,

The jetty and its centre,

But the spiral brought my eyes and body here.

To the centre, spiralling away from meaning,

Meaning, that is, of the jetty as its spiral curves,

Was my journey to the jetty like this spiral?

Or was it even there when I arrived?

I remember only the journey,

The journey brought on by the jetty:

The meaning is yours. 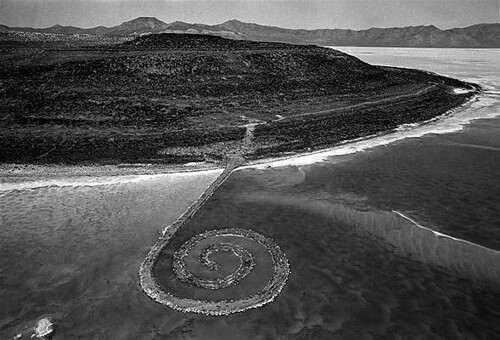