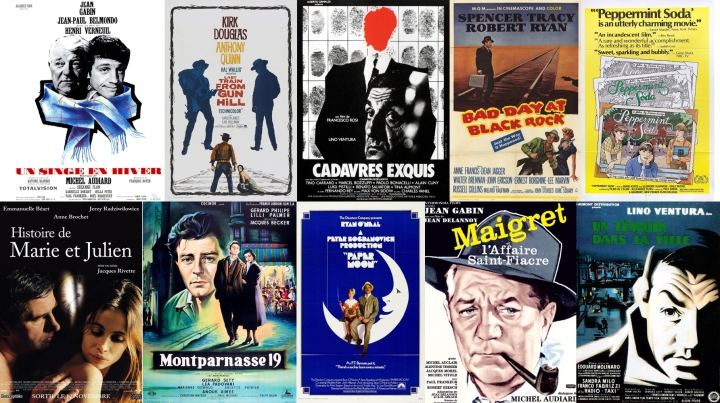 Several things have been different for me this year regarding film. The first is that, with the emphasis of my own work being mostly on cinema from the 1930s to the 1970s, I have (perhaps to my shame) seen only one new release of 2019. That new release was the excellent Ray & Liz by Richard Billingham. I will, at some point watch Joanna Hogg’s The Souvenir, Agnès Varda’s Varda Par Agnès, Robert Eggers’ The Lighthouse and Mark Jenkins’ Bait, just when viewing them is possible without opinions and hot-takes echoing as I watch.

I have found pleasure instead in properly trying to get to grips with certain cinemas of the past, and not simply relying on the keynotes of particular years, national cinemas and genres to understand them, but trying instead to be more encompassing (something that I think is not only lacking from film criticism generally but also in some quarters bizarrely celebrated).

There have been several cycles I have been drawn into this year. The most obvious in terms of what has made my top ten is the leaning towards the Tradition de qualité era of French cinema and, even more specifically, the films starring Jean Gabin and Lino Ventura. Especially when discussing the latter, there’s a sense that so much genre work from both actors (and others I’ve watched a lot of including Patrick Dewaere, Alain Delon and Jean-Paul Belmondo) has been written off, either because it lacks the credibility of work with more celebrated auteurs (the obvious example is Gabin’s work being defined by his films with Carné and Renoir) or because our relationship to national cinemas is one driven by cultural capital and, ergo, requires films to suit particular aspects of said capital.

From this a number of great films outside of my final ten have been watched too. The real surprise this year was in properly discovering the work of filmmaker Henri Verneuil who really could have occupied a number of slots in my top ten. I’ve made do with his beautiful film about addiction and the loss of youth, Un Singe En Hiver (1962). Equally, I loved Le Président (1961), Mélodie En Sous-Sol (1963), Cent Mille Dollars Au Soleil (1964), Le Clan Des Siciliens (1969), Peur Sur La Ville (1975) and Mille Milliards De Dollars (1982). Verneuil combined stunning visuals with tense narratives and used my regular favourite performers for some of their most brilliantly devious roles. If a director has bowled me over this year then it is Verneuil.

In contrast, I’ve also begun the long but enjoyable task of filling in my gaps in the canon of classic Hollywood Westerns though Hollywood itself makes its presence known in my top 10 uniquely through two classic films by John Sturges. But plenty of Westerns in particular have also stayed with me too. I’ve done my best to see as many films by Anthony Mann as possible, in particular his collaborations with James Stewart. Bend In The River (1952), The Naked Spur (1953), The Man From Laramaie (1955) and The Far Country (1957) were all perfect examples of what popular cinema can do (and I refuse point blank to even begin to consider some of the discourse surrounding Westerns and a certain other modern popular genre that has been one of many insufferable moments of “Film Twitter” this year). I’d also add Delmer Daves’ Broken Arrow (1950) and The Last Wagon (1956) to cap off an excellent year exploring the genre though I think there isn’t a genre I’ve watched and enjoyed more of this year than the Western.

At the arthouse end, I’ve seen less that has impressed but when it has, it has certainly hit the mark. I’ve enjoyed filling in the gaps I had left in Jacques Rivette’s filmography, manifesting in the top 10 in the haunting Histoire De Marie Et Julien (2003) but also including viewing in the year of Secret Défence (1998) and Haut Bas Fragile (1995). Also impressive were Bruno Dumont’s Flandres (2006), Agnés Varda’s The Young Girls Turn 25 (1993), Nadine Trintignant’s Le Voluer De Crimes (1969), Claude Sautet’s Les Choses De La Vie (1970) and Diane Kurys’ Diablo Menthe (1977). Here’s to another year of excellent viewing.

I’ve read around 80 books this year and, though reading many brilliant works, I can’t help but feel the overall quality (for the first time in as long as I can remember) has been lower than my film viewings. Admittedly, I think this has partly come from unconsciously venting my occasional frustrations with putting written work out there myself. This notwithstanding, I have still read some frankly astounding books, even outside of these ten brilliant works.

This year, I’ve finished the last three volumes of Marcel Proust’s In Search Of Lost Time (1922-1931). Having started it in 2017 the week before I began research on my upcoming novel, How Pale The Winter Has Made Us, it seems fitting that I finished it the week before my book, since written, edited, sold and formatted, was sent to the printers. It has undoubtedly had a profound effect on my own written work.

Also this year, I finished reading the work currently available in translation of Elfriede Jelinek. Aside from Wonderful, Wonderful Times, I also ploughed through Greed (2000), Lust (1989) and Women As Lovers (1975). Though Greed was arguably the most difficult book I’ve read this year, reading her work was without doubt a monumental discovery, not least in giving me confidence to break out of my own ticks and norms, as well as those currently imposed on British fiction writing via the industry. She seems a fitting follow-on to previous years’ binge reads of Thomas Bernhard.

Finally, when the work was heavy, I found myself leaning towards crime fiction (contrary to it being used as a whipping post by various attention-seeking authors of late). This is represented in fictional terms by Derek Raymond’s The Devil’s Home On Leave (and arguably Thérèse Raquin too) and in nonfiction terms in Gordon Burn’s Somebody’s Husband, Somebody’s Son. I’ve also greatly enjoyed Jean-Patrick Manchette’s Fatale (1977), Léo Malet’s 120 Rue De La Gare (1943), Georges Simenon’s Monsieur Hire’s Engagement (1933), Derek Raymond’s How The Dead Live (1986), Raymond Chandler’s The Long Goodbye (1953) and Dashiell Hammett’s The Thin Man (1933). Unusually, I’ve found the violence and macabre nature of these works to have increasing influence on my own writing so expect things to get more visceral in the coming years.

It’s been a busy year for work, not least in the continuation of working freelance. I may be relatively poor now but I can’t help but feel that the exchange for (mostly) creative freedom has been worthwhile. I’ve written around 60 articles at the time of writing this and I’ve been really happy with some of the more unusual commissions. I’ve travelled extensively around various cities, especially Paris but also Strasbourg, Vienna and Freiburg which has been incredibly rewarding. Add to this my slow break into the BBC for radio work and I’d say that it has been very positive indeed this year. Ten articles I’ve been especially happy with are below.

In terms of books, I saw my first fiction published by Influx Press in the form of Mothlight which has done surprisingly well considering it’s a weird one and garnered little attention from the more official end of the literary press. I am incredibly grateful as always to the guys at Influx in looking after me, especially as my new novel is out with them in February and a third was sold to them for 2022. Suffice to say lessons have been learned this year and I certainly know what to expect next time round. But overall, it has been a really positive experience and I’m lucky to have such a brilliant publisher to work with.

And finally, in film, my final short of the decade and probably the last for the foreseeable, was finished in the form my collaboration with Robert Macfarlane and Stanley Donwood: Ness. I’ve been incredibly lucky to work with them and be given the opportunity to make my little shorts for pretty much a full decade, so I’m endlessly grateful to all who have been involved in them over the years. Ness can be watched here.

Warm wishes for the festive season (filled with booze to wipe away the memory of the 12th…) and a Happy New Year.