On the 21st of January, over 100,000 people marched through London in solidarity with women against the hatred currently being espoused by the recently inaugurated president of the USA.  This was alongside many other marches globally, especially in America, of unprecedented numbers of people; showing their resistance against what is effectively a newly elected fascist government.  I went along on the walk, partly to support the message it sent out, but also to document and highlight an idea prominent in many kinds of activism; that of walking as effective political dissent.  The idea came about the day before when discussing the writing of Rebecca Solnit with a friend.  Solnit has covered the idea heavily, especially in her wonderful book, Wanderlust.  She shows such action to have been almost a constant throughout history, especially for women; their bodies being the very battleground with which to actually fight (and fight for) and be heard with.  As Solnit suggests:

“Women have been enthusiastic participants in pilgrimages, walking clubs, parades, processions, and revolutions, in part because in an already defined activity their presence is less likely to be read as sexual invitation, in part because companions have been women’s guarantee of public safety.  In revolutions the importance of public issues seems to set aside private matters temporarily, and women have found great freedom during them…” (2002).

I wandered early from Victoria station, heading towards Mayfair where crowds were already gathering outside the US embassy in Grosvenor Square.  The police presence was heavily felt in all forms, on the ground with armed officers, on the roads with vans and cars, and even in the air with helicopters.  They knew how many people this would draw, probably more than the inauguration of the president who had caused such an outcry.  I was armed with both my 35mm camera and my super-8 camera, darting all around the crowds trying to find the best signs and banners.  A few favourites ranged from the slogans “Trump’s not a pussy: he’s neither warm nor deep enough” to one simply adorned with a photo of Virginia Woolf.  Her Street Haunting essay came to mind throughout the day: “As we step out of the house on a fine evening between four and six, we shed the self our friends know us by and become part of that vast republican army of anonymous trampers, whose society is so agreeable after the solitude of one’s own room” (1930). 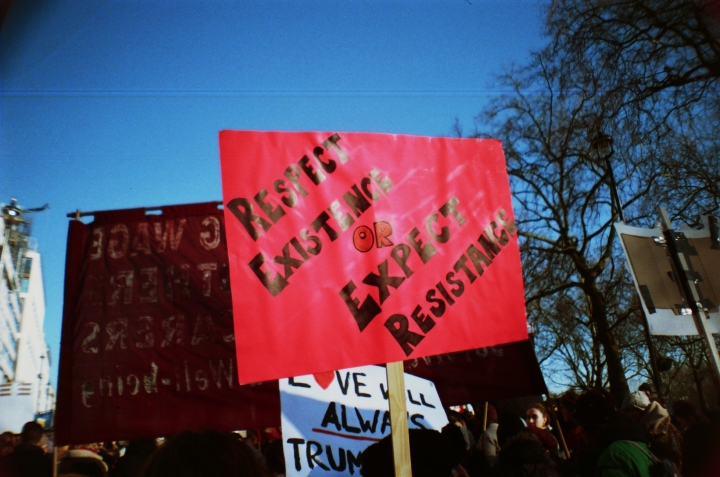 My camera raised the curiosity of everyone who saw it fire off, the sound seeming to be alien compared to the cameras of the many television crews there; there is no removal of the self from the moment with analogue technology.  I had to have help from one man with my 35mm as the day’s chilly climate meant that rewinding the reel of the harsh plastic turner was stinging to the fingers.  The chants rose as the speakers quickly got underway with several talks and readings before the walk commenced.  The air was vibrant was such a positive momentum, reacting and feeding upon the mass of people as their voices were amplified by one another’s presence, effectively bringing whole streets in central London to a halt.  The start was announced and the crowd ambled slowly passed the embassy; such was the volume of people that even the large Mayfair roads were initially jammed with bodies.  I got talking to one woman in particular who was visiting from Ireland but who had decided to use her last day here to voice her dissent at the US government.  She was intrigued that super-8 film was still being used and told me of her work on Casualty when working at the BBC before her work took her over the Irish sea as an editor. 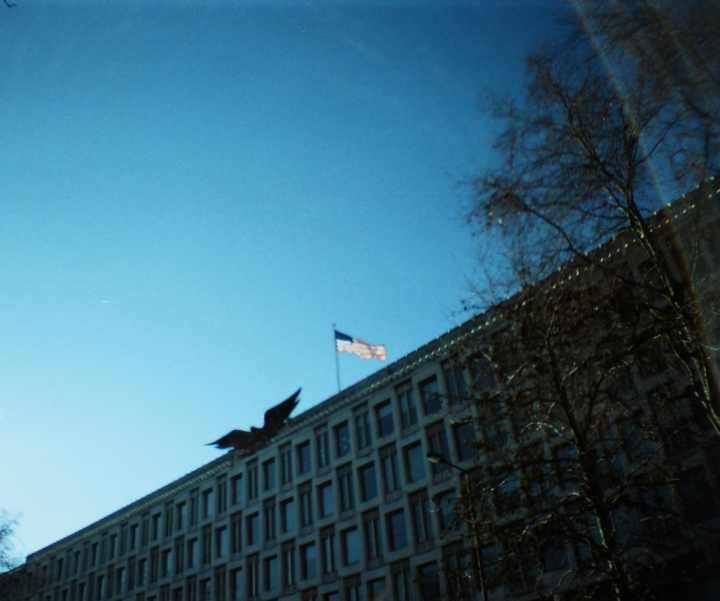 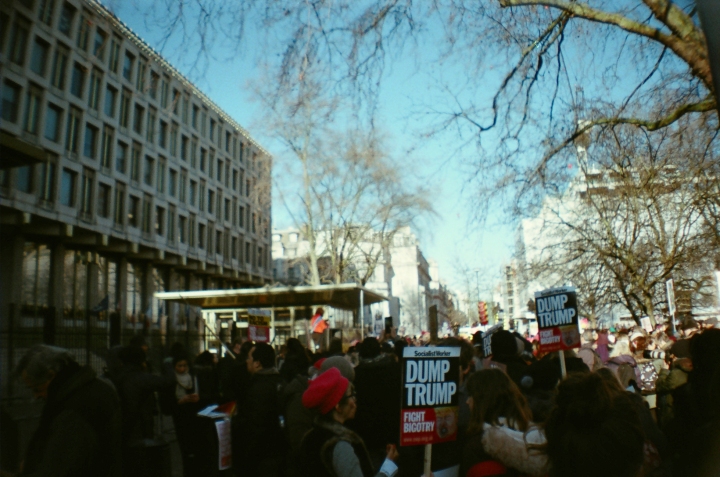 We parted company as I was needing several still shots of the crowd walking as it snaked its way parallel to Hyde Park and passed the many luxury shops and hotels that border the road.  The march wandered passed The Dorchester, some bemused onlookers doing their best to not look perturbed by people standing up for their beliefs; obviously an alien characteristic to the ultra-rich.  The road turned, the curve causing a brief congestion as the police had hemmed in the road to prevent the marchers from spreading over into Victoria and Buckingham Palace.  The edge of Green Park came into the view and Piccadilly became condensed with marchers, chanting and waving banners, feeling almost like a street party but with the added frustration of, as one banner put it, “…still having to protest this shit!”.  This was probably my favourite part of the march as the contrast between the typical zone 1 features and the heady atmosphere of the march spoke to one another in a number of interesting ways.  It’s difficult to imagine such tourist-heavy areas as Piccadilly accommodating such a huge influx of people but even the obvious tourists were joining in; cars beeping their approval from the open side of the road, tourists giving high-fives and even singing their own chants in support. 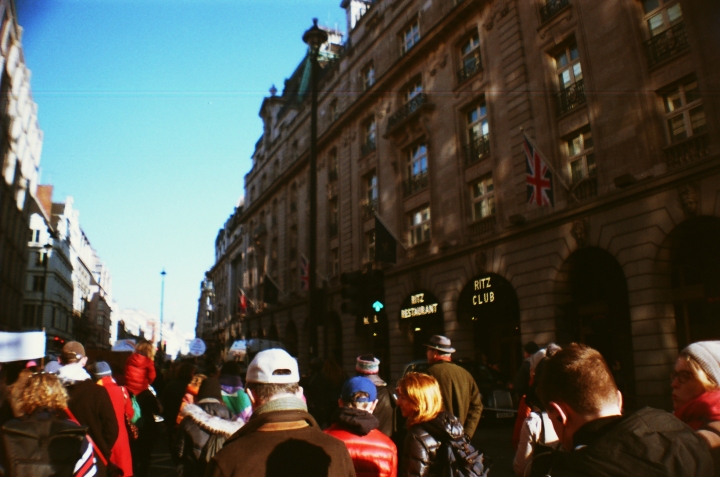 The walking halted approaching St. James’ Street, the tight corner again creating congestion.  I zipped around trying for shots with my camera; a policeman eyeing me with suspicion no doubt caused by my camera looking somewhat like a gun.  The contrasts increased as the route continued, coming to the luxury cigar shops of the area and eventually a VIP members bar on The Mall: The Oxford and Cambridge Club.  Suited men were sat in the window trying their best to ignore the thousands of women laughing at their absurdity; they became objects in a museum whose closing time is imminent.  The club provided a handy sound-wave effect as the march continued.  You could pinpoint how far away from the club you were just by judging the distance of the chanting and cheering aimed towards it.

After a final scrunch, I made it to Trafalgar Square just as Sandi Toksvig took to the stage to talk.  The square was brimming, each paving stone filled with multiple people cheering in solidarity against the new president and all of the misfortunes and horrors that sprouted in 2016.  My hands were ready to fall off due to carrying my cameras in the cold air for so long and so I meandered off back to Victoria to think and rest.  I later debated with a friend the point of the walk; he couldn’t see any effect that would be caused from it but I told him he was wrong.  We underestimate the power of a moment, similar to a chemical reaction; that moment of reaction where two elements react strongly against one another and create something new.

In reality, the metaphor doesn’t reflect the slowness of such change socially, such dissent and such voicing taking longer than a mere instant to evoke such change.  But history has proven time and time again that such voicing (and on such a global level) does provide the raw materials needed for change: that of hope, of community, of compassion, of dissent, and of pure energy.  In other words, all of the aspects that come from the very power of walking.  As Solnit, undoubtedly the most important writer currently living in the western world, writes: “Citizenship is predicated on the sense of having something in common with strangers, just as democracy is built upon trust in strangers.  And public space is the space we share with strangers, the unsegregated zone.  In these communal events, that abstraction, the public becomes real and tangible.” (2002.) 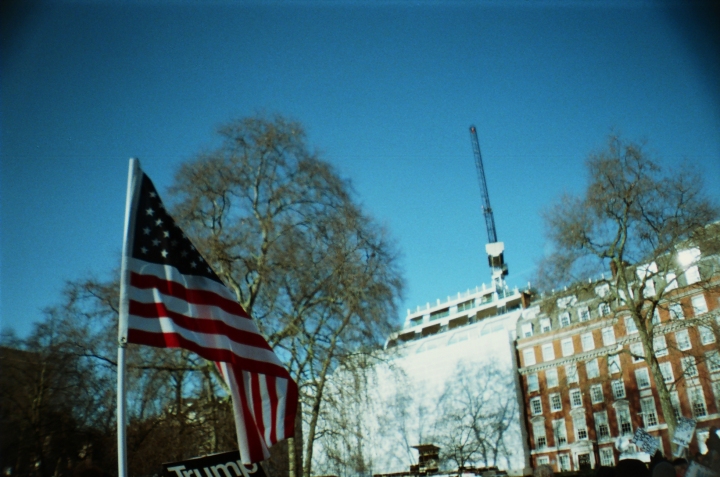 One thought on “Wanders:Women’s March London – Walking As Dissent”