Above is the trailer for the first film project of 2016, The Menhir Motorway.  The film has been slightly delayed due to missing virtually all possible deadlines in regards to getting the film developed but it is now well on its way to being finished.  Unlike virtually every other landscape short that I’ve made, this is one about an area that is personal to me, having grown up around it.  It was filmed a few days before Christmas in the chilly freeze of last December and the environment itself had its harshness amplified by the unforgiving temperature.  But more than being a personal exploration of what is a ubiquitous but under-appreciated space, it will also act in part homage to J.G. Ballard and his novel, Concrete Island.  Having the likeness of such a Ballardian space near to a home is surreal in hindsight, especially as it was a place where I often sought refuge and time, rather than attempted such an escape as Robert Maitland’s. 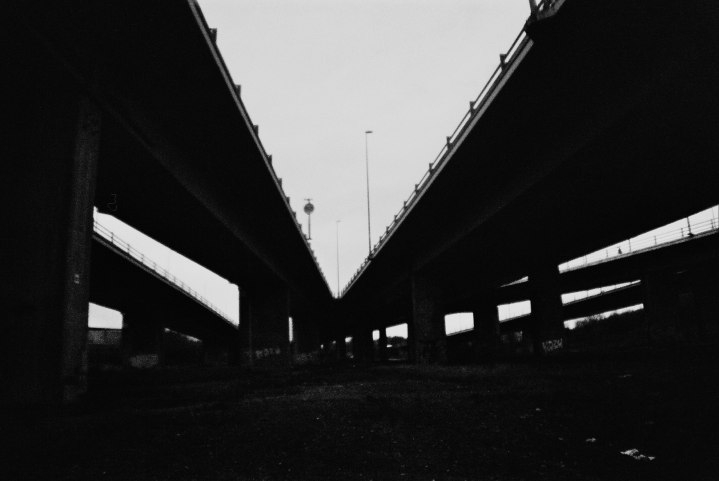 The soundtrack for the film is that typical mixture that I’d been using throughout last year with the wonderful voice of Paul Carmichael and the music of In Atoms.  It creates a heady, dreamy mix, again appropriate for the two spaces in question; the concrete labyrinth under the M53 motorway and the urban green-space and ex-quarry known as The Breck, both on The Wirral peninsula.  The music especially came about through seeing a brilliant live rendition of the piece and asking for it being in the film as it captures the natural melancholy of such an abandoned place. The journey of the film’s recording can actually be read in more detail in the following post from January but, until the film is out, more specific details about its origins and themes can wait until then.

The film will be having its preview at the beginning of April at an event happening in Liverpool called Spirits Of Place on 02/04/2016 where I’ll be giving a talk on the stranger elements present in the landscape of The Wirral. It will then be online to view a few days after on 04/04/2016.

One thought on “Trailer – The Menhir Motorway.”