More so than his relationship with painting, film, drugs or threesomes, Donald Cammell’s life and work seems to have been directly linked with mirrors.  While all of the former aspects played huge roles and allowed access to knowledge of his obsessions in the first place through his work, it is the mirror and its hidden powers that seem to haunt Cammell as an artist and as a human being.  When watching any of Cammell’s films, this obsessive tendency to in some way use the mirror to question identity becomes an easily recognisable meme but, upon learning the role that the mirror played in Cammell’s untimely suicide in 1996, the role of mirrors in his work cries out for greater investigation.

There’s another defining connection here as well, perhaps beginning to explaining Cammell’s creative need to use mirrors within his thematically induced visual paraphernalia.  So often in descriptions of Cammell, he is portrayed as well-read and bookish, littering his films with references to high literature; not as some bourgeois acknowledgement but almost as a release of repressed intellectualism brought about because of the overt populism of his chosen medium.  Of all of the writers to occupy this sense of release, few seem as more important in Cammell’s life than the Argentinean essayist and short story writer, Jorge Luis Borges.  Examining Borges’ work and ideas alongside that of Cammell’s, an interwoven network of connectivity is ascertained, leading both back to the infinite object of the mirror.

Though the history surrounding Cammell’s own suicide is disputed, some connection seems to be established between the interest in mirrors and Borges.  Having shot himself, his wife recalled that he survived for a surprising amount of time after the shot had been fired; the director having often questioned why death was approached more calmly in the western mindset when it was accidental rather than planned.  Cammell’s wife claims two particular things to have happened during this brief moment where the director, having somehow managed to overcome the pain of an eventually fatal shot to the head, remained conscious for some time afterwards.  The first is that, in his calm frame of mind, he asked “Can you see the picture of Borges?” in reference to a scene from his debut film, Performance (1970).  The other is that he asked his wife to hold up a mirror to his face in order for him to be able to watch himself die, as if some great new revelation would pass ultimately before he would.

Working backwards from this moment, it is clear that Borges and the mirrored object played a key role in Cammell’s mindset but also that the two aspects may in themselves be linked.  They seem connected not only by the narrative of his own death related by China (Kong) Cammell but within the dialect between themselves.  In other words, Borges’ thematic developments have previous ties to mirrors and their subsequent potential of expressing infinity (perhaps being the only physical object to achieve such an expression).  Many Borgesian motifs are present in Cammell’s back-catalogue, overtly so in the case of Performance, but could the use of mirrors in Cammell’s other work also be tied in some way to his passion for the writer’s ideas?

Of all four feature films that Cammell made, mirrors play varying and sometimes explicit roles in the director’s sense of expression.  Whilst in Demon Seed (1977) and Wild Side (1995), they play very little importance other than a passing gesture, in Performance and White Of The Eye (1987), it manifests in the absolute extreme.  The metallic reflections of the built creature in Demon Seed perhaps give a sense of the expression of sentience; that something on the other side is looking back from behind the reflection.  In Wild Side, the smashing of a mirror (another specific action which Cammell often repeats), signals the escape of a character with the object previously acting as a barrier that stops a gangster from entering the room; the vision of himself being perhaps the only thing that can stop the quite maniacal and powerful figure.

In Borgesian terms, the mirror has a much greater role than this minor sense of symbolism.  More than a footnote for something noumenon-like, the mirror has the potential to highlight the horrific endlessness of the void and its infiniteness is to be feared.  In Borges’ poem, Mirrors (1960), various ideas later explored by Cammell in his films occur.  For example:

I, who have felt the horror of mirrors
Not only in front of the impenetrable crystal
Where there ends and begins, uninhabitable,
An impossible space of reflections, (Borges, 1960).

The horror that the mirror can present is the horror of the self and Cammell reflected this in both his films and in his final act.  In White Of The Eye, a film about a psychopath on a murder spree, the main visual trait used within the film is the close-up, Giallo-like, of various victims’ eyes.  However, Cammell is not showing this simply to emulate the Giallo genre (of which the film has only a fleeting resemblance).  The killer, before the first murder especially, is shown to force the victim to watch their own death in a handheld mirror, the close-up of the eye actually acting as a strange, potentially disturbing point-of-view shot. 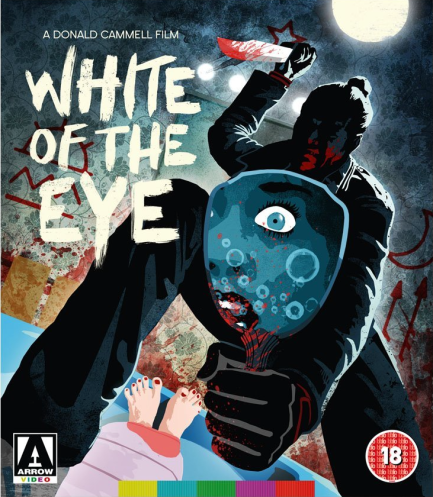 There are obvious parallels between this visual action and the narrative surrounding Cammell’s own death.  If the latter were true, it could be said that the mirror was actually more than simply a reflective object but a space where one’s own death is perceivable; for uninhabitable read “The undiscovered country from whose bourn.  No traveller returns…”.  The return (or lack of) that Shakespeare is discussing can equally be read as a lack of experience of death.  The mirror, in Cammell’s films and his life, can overcome this aspect as death is only finite in this world but in the reflection of mirrors is infinite:

They prolong this hollow, unstable world
In their dizzying spider’s-web;
Sometimes in the afternoon they are blurred
By the breath of a man who is not dead. (Borges, 1960).

Of course, the strongest confluence between Cammell, Borges and mirrors comes in his debut feature, Performance.  The breaking of a mirror in the Memo For Turner sequence ultimately marks the transition of the character in a power play of identity swapping but most interesting is the way that the mirror acts out this crises in regards to gender identity.  Whilst the very ceiling of Turner’s music room is a high-up, full level mirror, the most interesting moments occur with the use of smaller mirrors in the film.

Before the film’s infamous threesome sequence, Pherber (Anita Pallenberg) tests the workings of a super-8 camera by shooting herself in the mirror.  The voyeuristic capture of the scene on the handheld camera comes into question because of this as it highlights the narcissism of the character in the first place.  In other words, is the height of capture in the camera greater when the images it catches are of itself?  Borges’ poem highlights this contradiction with the single line “Everything happens and nothing is recorded, In these rooms of the looking glass…” (1960).  It’s a moralistic problem that the film increasingly pivots on.  Later, after the on-the-run gangster, Chas (James Fox), has been given drugs, he is questioned by Ferber about his gender and his sexuality.  The mirror reflects Ferber’s face and breasts onto Chas, providing in a single visual a showcase of the sheer power of the mirror; opening the questions surrounding gender into a cascade of infinite and unrepressed permutations.

Ultimately, Borges is smashed within Performance, his writing (which is given several mentions throughout) literally smashing in a mirror-like way as Chas fires the famous shot into Turner’s head.  Read backwards, Cammell’s life stems from this moment, creating a tragic and horrific arc towards the infinite that could only end in one conceivable way.  It is therefore best to end with the final stanza of Borges’ poem which highlights the ultimate alarm that the mirror can and did induce in Donald Cammell:

God has created night-time, which he arms
With dreams, and mirrors, to make clear
To man he is a reflection and a mere
Vanity. Therefore these alarms. (Borges, 1960) 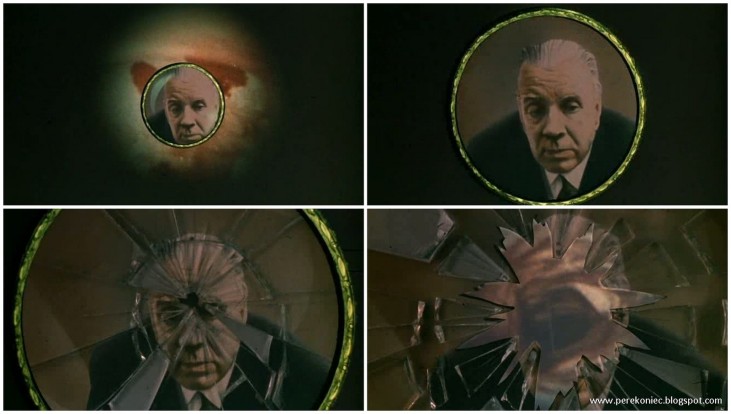