Never before has so much art work been housed in one space as the Copperas Building which is housing the Bloomberg New Contemporaries, City States and more of The Unexpected Guest exhibition.  Due to the sheer amount of decent work on show in the building, reviews of each exhibition and work will be split into numerous articles to make sure that all the work gets the attention it deserves.

Bloomberg New Contemporaries presents strong exhibition of work this year that defies the engulfing hugeness of the space.  Even the smaller works survive the never ending postal sorting space thanks to some innovative design on behalf of the architects and builders of the new walls and sections that adorns the work.

Some of the best work in the show is sneakily hidden around the back of these mini monoliths and making a slight detour away from the main body of work leads to a shock of colour and shine in the work of George Little.  One aspect that has seemed conspicuous by its absence at this year’s Biennial has been traditional painting (at least traditional in the sense of painting on a canvas and framing it).  George Shaw’s work was one particular anomaly but Bloomberg has seen fit to rectify this imbalance.  Little’s painting’s vary in size and angle but display a Cy Twombly like attack in colour and shade.  Royal and A Better Life are perfect examples of Twombly like shaping and spiralling motifs however it is in his biggest Canvas that Little finds a truly original voice. A Mess Up At The Holy Palette is at once overpowering and only matched by the work of Max Ruf around the corner.  Its size belies its detail and also distracts from Entrance To the Restaurant; an installation of a table fitted with glass bearing his increasingly familiar style.

The paintings continue in the form of three works by Max Ruf.  Ruf seems similar to Little in a purely visual sense but his pre-occupation seems to be more with presentation than colour and also contrasts that colour with darker shades.  His work is painted onto linen allowing some interesting effects to be created from what is probably quite a simple technique.  His massive untitled piece from 2011 seems impressive simply because of its size but also seems powerful and overbearing with it being unprotected and so big that it’s simply leaning against the wall rather than hung.  Sights takes full advantage of its linen texture and is draped over its stand allowing the paint to again morph into new shapes while Backyard Shooting Range has used paint to create a beautifully physical and 3D effect to contrast its muted and shaded background squares.  A colourful target, perhaps speaking of its method of creation as its clear the paint wasn’t applied through any normal method. 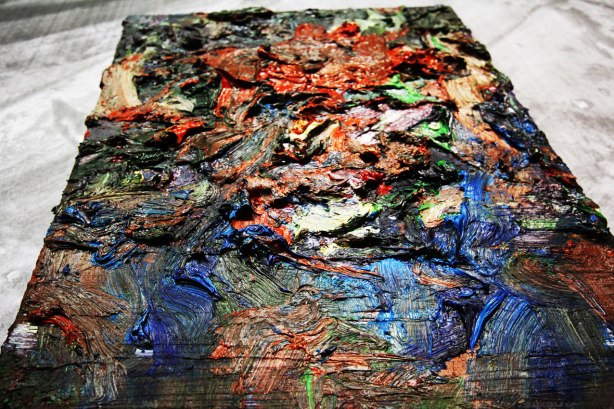 Following the route along further, the work changes mediums from painting to photography with some beautiful displays of work from Bryan Dooley; the literal poster boy for this year’s exhibition.  Trak Star II is the main feature that is even used to cover this year’s accompanying book to the exhibition.  It seems a fitting choice as Dooley’s photography is designed to fit around corners and be displayed in innovative ways.  South Of Town is also interesting in its fitting to PVC which differentiates it from its white background, adding emphasis to wood chopping and workshop picture, full of texture and manual work.

Tony Law’s video piece Strolling is one of the many video pieces in the building.  The continuous strolling of its subjects speaks of the never ending goal to get somewhere; something highly ironic in an exhibition of up and coming artists.  Its visuals don’t match its thematic qualities but is an interesting piece and one of the better video pieces in the Biennial this year.

Painting comes to the fore again in a trilogy of works from Oliver Osborne.  Osborne’s painting is even more traditional in its methods with all three being acrylic on canvas.  All three of paintings have a cold and distancing effect, in particular Nimm Lieber Ein Taxi which uses mint colouring to backdrop a digital image of a cartoon scenario involving a taxi.  His two untitled pieces seem more atmospheric than the former, vaguely humorous, work yet there’s something not quite finished about them which weaken the pieces in comparison to the previous paintings in the show.

Lauren Godrey’s Memphis, The White Wall is the most process driven piece in the Bloomberg New Contemporaries.  Looking at the printing effect and deliberately using colour to produce a print to stand next to the device that created it, the process is brought to the fore, allowing the viewer to decide whether they prefer the work or process involved in making it while also questioning whether art is about the journey or the finish. 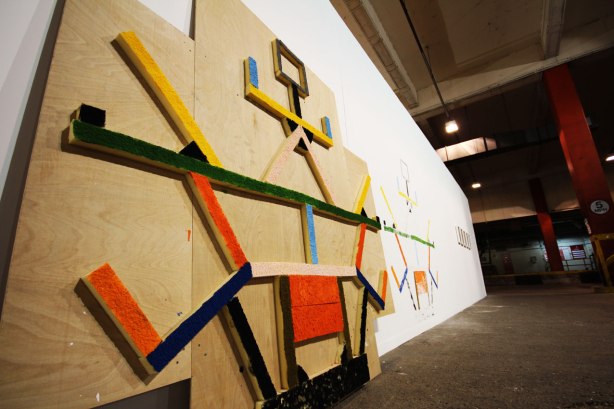