Doug Aitken’s video work has always had a sense of scale meaning that it has a natural affiliation to huge pieces of modern architecture and buildings.  They have in the past snaked their way around buildings and installs, making use of the space around them and allowing the video work to spark a new relationship with ordinary passersby as well as art aficionados.

His work for this year’s Biennial, in partnership with Tate Liverpool and the Sky Arts Ignition series, seems an interesting but almost anomalous result when compared with the rest of his work.  The Source is interesting both visually and aurally but its overall use of space seems to set it apart from his other work and instead places it into a new, almost undiscovered country.

The Source is, in simplistic terms, a collection of interviews with creative people across a spectrum of fields and practices, with a goal of finding the apparent source of creativity.  Among these interviews are some big named artists such as Beck and Jack White as well actress Tilda Swinton and Mike Kelley amongst many others.  All the interviews are conducted by Aitken who appears to have a natural talent for interviewing and builds up some extremely interesting conversations that many publications would no doubt pay great sums to have. 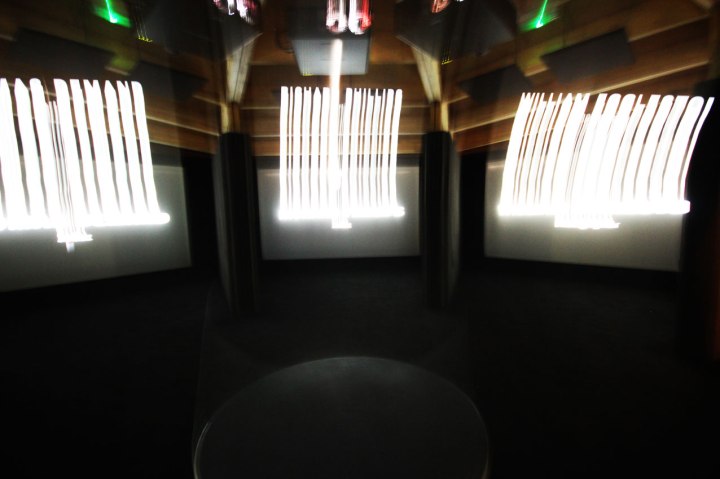 Housed in a pavilion designed by British architect David Adjaye, it is perhaps one of Aitken’s oddest placements of work.  The inside of the space is dark and houses a podium in the middle to sit on, allowing multiple viewings of several interviews at once.  This is where the multi-sensory nature of the work begins to coarse as the sounds and voices start to weave and overlap into a cacophony of sound and conversation.

This is of course the creative element of both the space and the work but it seems quite a flippant method to show the talks when they’re of such high quality and interest.  Of course the piece isn’t simply about what the interviewees are saying, yet much of their meaning and answers are lost in a wave of words and sound.  A better experience is to move closer to the screens so that the individual sound of the conversation can be heard, even at the sacrifice of breaking the image with one’s own shadow.  Perhaps in overlapping the voices, Aitken is trying to put together everyone’s answers, creating one whole source for creativity; like an artistic holy grail asking to be found in the constant stream of ideas.  Again though it is best to stand at the base of the fountain for this effect and listen to each conversation close-up as opposed to standing in the middle and getting soaked with the constant flow of sound which is overwhelming.

While this in some ways is a criticism of the effect that the physical nature of the work has on its thematic material, the overall effect is still staggering.  Viewing the piece with no particular quest for information or interview is best and allows its aural complexities to wash over the viewer and become something of an immersive experience.  Aitken may not have overtly pin pointed the source of creativity but he has no doubt created new ones in the minds of the casual viewer. 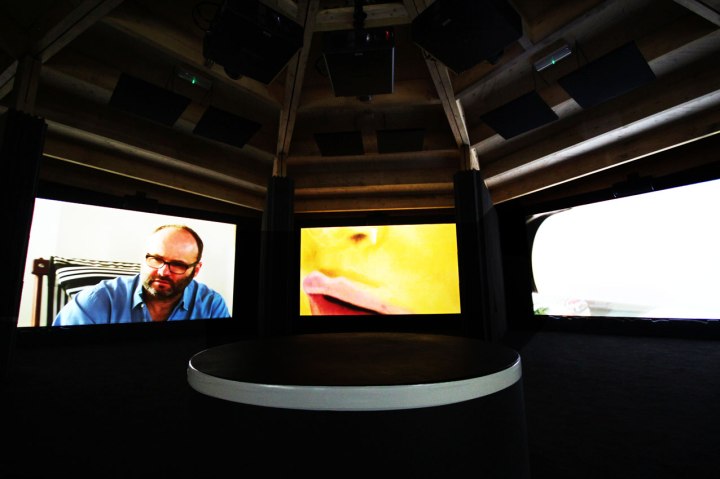