Horror films were slow on the upkeep when it came to electronic music. Though elements of it were being used in other genres before 1968, electronic music didn’t really reach horror until the late sixties. The exact date of the first use of electronic score has been attributed to various films; largely Cold War fare such as The Day the Earth Stood Still (1951) and Invasion of the Bodysnatchers (1956). Despite its Cold War undertones and allusions to the Vietnam War, George A. Romero’s Night of the Living Dead, from 1968, was the first pure ‘horror’ film to take advantage of electronic scoring.

Night of the Living Dead’s status as an archetypal ‘B-Movie’ may have diminished its capacity to be taken seriously within the field of film music theory. This, along with the fact that none of the music within the film was specifically composed for it, has led to very little analysis of its unique use of score. Indeed, an examination of its sheet music alone could lead to comparisons with the classic horror scores of Universal or Warner. Instead of looking into the aspects of the score itself, a better way to establish its legacy might be to look first at the work of the unaccredited electronic effects creator Karl Hardman.

Hardman’s role on Night of the Living Dead is arguably as important to the legacy of the film as Waxmen’s is to Bride of Frankenstein. The low electronic rumble that dominates the film’s second half is as integral as the predictable, dramatic stock music that it’s mixed with. However, there is something to be said for Hardman’s use of stock music. Easily accessible and affordable, stock music is convenient, but in Hardman’s hands, it’s hardly filler material. Hardman’s use of it is instrumental in opening up yet another inventive method of scoring; a method that would influence the soundtracks of many films to follow.

Though the Night of the Living Dead visuals were a step in a new direction for genre, the score is oddly familiar; it could easily be from a throwaway Universal horror film. As the narrative focus changes, so does the music and it is here where the electronic element of the film’s score takes centre stage. As the dead are reanimated in classic gothic fashion, the accompanying stock music remains similarly traditional. However, as the zombies evolve into a product of mankind, the stock music is gradually modulated electronically and thus subjected to a basic form of modulation similar to that of the aforementioned Cold War sci-fi films. The shift from the classic sounds of wood and brass instruments to the shimmering electronic soundscape follows the narrative trajectory from the supernatural to the man-made. This musical shift is unnerving, and at times, distracting, particularly in the infamous stabbing scene.

The electronic modulation in this particular scene is metadiegetic, making it unclear what the mother actually hears when her daughter stabs her. Through this ambiguous soundscape, Romero successfully explores the disturbing nature of this painful death. The sound here is a particularly good example of an early form of ‘Source Scoring’ (music that falls between diegetic and nondiegtic music) making Romero’s film way ahead of its time.

The gradual change from classical to electronic within this specific piece was a direct assault on the traditions of the past. Though the film’s visuals alone perhaps could have been enough to kick-start the production of a wave of new horror films, its lack of acknowledgment for the gothic tradition in regards to its score is what made it fresh and exciting upon release.

Indeed, many horror films that followed, from the 1970s onwards, used electronic scores and mixed them with popular scores of the day. Gothic traditions remained in films by Hammer, Amicus and Vincent Price (Theatre of Blood and Witchfinder General specifically), though Price himself was not immune to Night of the Living Dead’s modern, electronic influence.

The Abominable Dr Phibes (1971) tells the tale of an Adorno-like classical music obsessive out to avenge the death of his wife. Classical score is used in the film in order to illustrate the character, but is balanced by the film’s composer Basil Kerchin, who mixes popular music of the time with electronic effects. Though perhaps not influenced directly by Night of the Living Dead, Kerchin’s score demonstrates a way in which electronic music made its way into the more traditional films of the genre.

A purer example of Night of the Living Dead’s influence might be Tobe Hooper’s The Texas Chainsaw Massacre (1974). The film contains very little music, harking back to the first sound pictures of the horror genre, such as those by Browning and Whale. The film received much praise for its dark and disturbing soundscape, which was clearly influenced by Romero’s aural vision.

The Texas Chainsaw Massacre utilises a suitably grating sound type, making for one the most unpleasant soundtracks in cinema. The film boasts some darkly comic scenes amongst its barbarism, but it’s the combination of these visual disturbances and unnerving soundscapes that makes its audio-visual experience even more uncomfortable than that of Night of the Living Dead. The grinding sounds in the film mimic that of a meat house, playing on the idea that ‘the people in the movie suffer exactly the same atrocities daily inflicted on beef cattle’, as Newman points out. 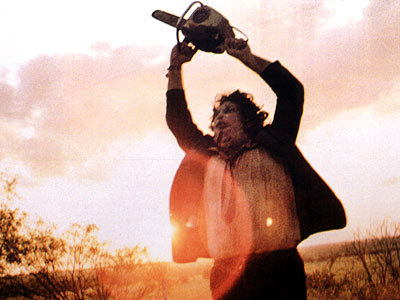 Whereas Hooper’s The Texas Chainsaw Massacre explored the electronic soundscape found in the Texan outback, electronic music was not limited to the desert. Electronic sound was present in many horror films of the 1970s, including the clinical and scientific worlds of David Cronenberg. Cronenberg’s Shivers (1975), for example, boasts electronic beeps that help to shape the film’s septic atmosphere. Cronenberg’s personal style fitted neatly with the electronic revolution. From the bloodthirsty zombies of Rabid (1977) to the manic children of The Brood (1979), Cronenberg’s early films dealt with man-made horror and used an electronic score to reinforce this. Cronenberg’s composer Howard Shore took an avant-garde approach, arguing that in horror films there is the freedom to ‘go as far as you could go’. This avant-garde mentality is arguably what shaped Night of the Living Dead’s lasting legacy of the electronic score.

Night of the Living Dead and The Texas Chainsaw Massacre set the blueprint for the next two decades, along with John Carpenter’s Halloween (1978). Halloween’s iconic piano motif, repeated throughout the film, is mixed with electronic synthesisers; the film’s murder scenes are soundtracked by these electronic sounds. Horror cinema endlessly repeated the soundscapes of these three films, doing so well into the late 90s. 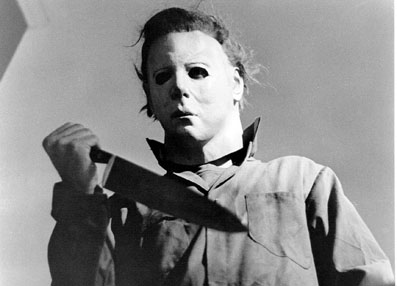 In the 1970s, synthesiser music was on the cusp of exploding onto the popular music scene. Carpenter’s fresh, innovative score was a beat ahead of the synthesiser movement of the 80s, with Donnelly calling it ‘highly distinctive and an effective part of the film’s arsenal of effects’. However, when the synthesiser was popularised in the 1980s, it was the affordable nature of the electronic score that was its most appealing aspect.  Though still in many ways rebelling against the classical tropes of horror score, it is here where the electronic score begins to wander down a blind alley. Repetitive usage led to it to becoming quickly dated. It is also where we leave it lurking for the time being…

One thought on “The Horror Score Rebellion Part 2 – Night Of The Living Dead And The Electronic Score.”