The arts in post war Japan took a drastic turn in terms of ideals and beliefs after the defeat at the end of World War Two.  With the downfall of the nation being so utterly brutal and the clearness of what the country itself had done being plain for its citizens to see, the arts turned humanist in the extreme.  Yasujiro Ozu is the product of this movement and his films paved the way for a new golden age of Japanese cinema that lasted till way into the 1960s.  Balancing the line between philosopher and mystic, Ozu characterises this humanistic approach perfectly and his films can act as both entertainment and intellectual discourse at the same time.

Late Autumn is aptly named with it being one his very last films.  Made in 1960, it plays to all the usual themes addressed in the Ozu canon from family relationships to the respect of others and most importantly, the effect of time on the nature of these relationships.  The Japanese term mono no aware (the sadness felt with time passing) is a big theme that consistently crops up in his work and Late Autumn is possibly the best example of this outside his undisputed classic; Tokyo Story.

The drama of Late Autumn is gentle but constant with the narrative focus being on three businessmen trying to find a husband for the daughter of the widow they were obsessed with when they were young.  This match making may appear to be rather twee on paper but the handling of the story means we are saved from the usual romantic comedy affair a film would obsess over today.  Instead what is presented is Japanese society in a microcosm, from the patriarchal nature of the gender relationships to the customs and polite rejections that define Japanese manners and traditions for a worldwide audience.

An argument as to whether what we see is authentic is invalid as it isn’t the main agenda of the film.  The film seeks us to question the motivations behind the three businessmen and turns their actions from a simple, comedic faux pas into something that is more saddening for the widow played superbly by the graceful Setsuko Hara.  With both age groups running parallel in their ambitions to match-make for both the daughter and the widow, we see the mono no aware perfectly, almost pre-empting the fate of the future relations Yoko Tsukasa’s character will have. This has the effect of making the viewer side with the increasingly agitated but eternally polite Hara who we can’t help but feel sympathy for, with the businessmen’s innocent blundering gradually building a wall in the relationship between mother and daughter. 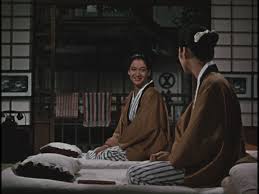 Similar to Tokyo Story again, the final act of the piece looks into the inevitable separation between parent and child.  However, it seems unnatural with the daughter’s leaving completely being businessmen’s fault and the widow is left on her own having rejected the affections of one business man who is a widow himself.  Though the daughter effectively lives happily ever after, the film hints at the potential guilt she’ll carry with her for abandoning her mother and this makes the ending bitter sweet in the extreme even with the widow knowing that fate was inevitable.

Visually the film has that wonderful Ozu quality of focussing on the 3D aspect of rooms.  With the cameras panned low we witness the ceilings and walls instead of just the floor adding that wonderful cubist like mise-en-scène to the Japanese buildings.  It also allows for the characters to move freely and there is never a shot broken by the movement of a head or limb out of the 4 sides of the screen.  Another aspect that adds to the film are the colours, which for a filmmaker whose work is predominantly in black and white, adds a fresh new reality to the shots.  The clothes and work places look exciting and busy, adding movement to the static elements produced.

The B.F.I release is just one of the many in their Ozu collection range so is up to their usual high standard.  Apart from giving the viewer both the Blu-Ray and the DVD in the release, there is a second film accompanying Late Autumn that makes this release a must have for fanatics.  With so much of early Japanese cinema being destroyed in the war, anything early that survives is going to be an exciting venture.  A Mother Should Be Loved is a silent film from Ozu’s early days and even with its first and last reels missing, it stands up wonderfully while addressing similar issues in Late Autumn.  The restoration on both of these releases is also an astonishing feat and Late Autumn in particular looks better than it has ever done (even better than the region 1 Criterion).  A small booklet discussing the film and its restoration is also included and is the icing on the cake in what is in essence a perfect release.

Yasujiro Ozu’s work deserves far more mainstream praise than it often gets.  It’s often reserved for the more highbrow film fan yet their themes and nuances should speak to people from all walks of life.  The beauty and delicacy on show is awe-inspiring and Late Autumn is a film with a meditation on life that everyone should be able to take something from.