Unlike the guide to vintage horror published previously, Science Fiction film is in a far better state of affairs than Horror.  Modern Sci-Fi is still as strong as it ever was with at least two decent films in genre being a released every year.  With Horror, to enjoy the genre in its full, viewing vintage Horror is absolutely vital.  Here vintage Sci-Fi is different.  We do not need to look too far back for good Sci-Fi as we still get a large amount today.  However vintage Sci-Fi is most definitely worth looking into as its films are easily some of the best in any genre of any time and are also some of the most political without it being over bearing.

We start our journey into the world of outer worlds in the silent era where the genre effectively kick started narrative cinema as we know it.  R.W. Paul is a little known British filmmaker but his short films are now known to be of great importance.  His most famous short is effectively a little piece of Science Fiction and is called The ? Motorist.  It’s only a three-minute film but for its time (1906), it’s totally astonishing.  We watch as a couple driving a car get chased by a policemen but he loses them as they car drives up the side of a building and then into space where it drives around the rings of Saturn before returning back to Earth.  It’s worth getting the R.W. Paul short film DVD released by the BFI as it contains lots of interesting films but it’s also on Youtube.

Another silent short film from the same era is even more mind blowing and its influence extends to the whole of fantasy, Sci-Fi and fictional cinema.  Georges Méliès’ Le Voyage Dans La Lune is an amazing film about a man who travels in a rocket to Moon, which is famous for having a face.  At the moon he meets strange creatures and the film pretty much trips out.  It’s only short at around 15 minutes and is very hard to find on DVD but is on Youtube in full so would recommend watching it there.  At this point it would be wise to mention Fritz Lang’s Metropolis but having already spoken in detail about it in https://celluloidwickerman.com/2012/06/22/a-beginners-guide-to-fritz-lang/ I would say to look at the details of that film there.

We now jump a decade or two (and missing out the 1925 version of The Lost World) to the 1930’s where three films stick out as being high quality Sci-Fi.  The first is the original 1933 version of King Kong.  A film that should really need no introduction as it has become part of the lexicon of pop culture for years.  It’s available for £5 and the print is great.  The other two films are grouped together as they’re both based on the works by H.G Wells (or God as he’s sometimes known).  Island of Lost Souls and The Invisible Man are both classic films though the former is actually quite disturbing for the time.  The latter is by James Whale (see ABGT Vintage Horror), which means it’s full of camp wit and is miles ahead of the time.  The former has just had a wonderful Masters of Cinema release which are always worth getting (£14.99) while the latter has a vanilla release as part of the Universal collection (£3.99).  Both are worth getting.

Jump forward to the 1950s and we get a total Science Fiction take over with interest in travel through space at a high (along with Cold War anxieties).  The Day the Earth Stood Still starts off the Cold War trend wonderfully, telling the story of a misunderstood alien who threatens to destroy with the world with his dangerous robot Gort if Man did not mend his ways.  That catch line sounds a tad cheesy but in reality it’s a brilliant film that must have struck a few nerves in the 50s.  It’s available for £5 but our library holds a copy.  Invasion of the Body Snatchers is another paranoid film about infiltration and invasion.  A man has discovered that people are being replaced with duplicates that wish to take over the world and he must escape with his wife and warn the neighbouring states.  It’s a tense watch and the whole idea of not knowing who is real and who is an alien is worked extremely well.  It also has a fantastic chase scene at the end and dark and foreboding end.

War of the Worlds is another H.G. Wells adaptation and though the film version is possibly the weakest way to experience the story, it’s got some excellent model work and again plays into the Cold War Paranoia, which is something that can be exhilarating if you buy into it.  It’s quite hard to find on DVD but is online in various places.

The Thing from Another World (which was remade in the 80s wonderfully by John Carpenter) is yet another classic Sci-Fi tale of a group of scientists who unearth an evil creature that can take the form of people.  It’s a theme that’s consistent in many of the 1950s films but it works best here as it’s the only film covered so far that blames the people who created the situation (i.e. instead of metaphorically suggesting that Russians were evil it instead blamed America for continuing to partake in the Cold War Stand off).  It’s available for £3.50 and at the price it should be a very tempting buy.  If you like this film it may also be worth checking out The Blob but it takes the political edge out and replaces it with a cheesy but enjoyable B-Movie ideal.

Forbidden Planet is probably the most colourful film to look at in Vintage Sci-Fi and its special effects are still better than many shots today (the Krell machinery in particular is awe inspiring and would be a joy to see on the big screen).  It’s basically Shakespeare’s The Tempest but put into space.  It’s full of wonderful 50s clichés with robot gadgetry and space travel dreams.  It’s probably one of my favourite films ever so I’m biased in recommending it but suffice to say, it’s a dam good film.  The special edition is available for £5 (bargain) but if you have a region 1 player, there’s a massively exciting box set with Robbie the Robot figure and all sorts of other geeky things.

It would be impossible to mention vintage Sci-Fi without talking about Ray Harryhausen model work.  His films are famous for the utterly charming stop motion effects and creatures he made, all of which clearly took a lot of time to make.  Earth Vs. The Flying Saucers and It came from Beneath the Sea are his best but would just recommend getting the Ray Harryhausen box set which is around £11.99.

1960 is where we’re going to cut off the timeline for Vintage Sci-Fi and end this article with a recommendation for yet another H.G Wells adaptation.  The Time Machine is the best film about time travel ever made.  Starring Rod Taylor, it’s warmth and cosy atmosphere makes it perfect watching for Christmas time and it contains one of the most evocative and beautiful scores ever composed.  It’s quite hard to get hold off at the moment (which is a crime) but it’s essential viewing. 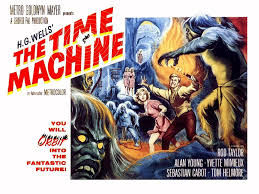 The 1960s saw an explosion in experimental and influential Sci-Fi that has lasted till this day.  The quality of the films discussed is high, though some film snobs would argue otherwise (mainly because they need things handed to them on a plate and effects to be CGI) if proof were needed of their high standard see how many of the films here mentioned have been remade recently.  It’s in these films that the medium itself found the most subversive way to be political as well as exciting and anyone who dare shrug off the genre as mindless escapism really should give these films a go.